In Forth Worth, Texas, the 14th Van Cliburn International Piano Competition came to a close with the announcement of the winners. Held every four years since 1962, this was the first Cliburn Competition since its namesake passed away, in February at age 78. The storied pianist came to worldwide attention in 1958, when he won the Tchaikovsky Competition in Moscow, beating out the Russian competitors at the height of the Cold War. The Competition that takes his name has brought to prominence some major talents, including Radu Lupu, Barry Douglas and Olga Kern. The level of artistry of the 30 competitors was exceptionally high, and one can view all of their recitals and chamber performances online at www.cliburn.org (please click here). 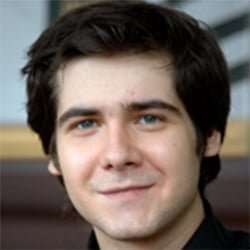 The gold medalist, Vadym Kholodenko, also took the prizes for best performance of chamber music (César Franck’s Piano Quintet in F minor) and best performance of a new work (the compulsory Birichino by Christopher Theophanidis). His performances of Prokofiev’s Piano Concerto No.3 and Mozart’s Piano Concerto No.21 (in C, K467) were cheered by the avid audience, many of whom were in attendance over the entire 17 days of recitals and chamber music performances with the Brentano Quartet in addition to the orchestral concerts. Kholodenko’s Mozart featured a cadenza that he wrote himself … on the plane on the way to the Competition, he admitted.

Beatrice Rana was awarded second prize, the Silver Medal. Her performances of Beethoven’s Piano Concerto No.3 and the same Prokofiev were lauded by critics and cheered by the audience (it must be said that the audience cheered for all of the performers, though some louder and longer than others). Rana also took home the Audience Prize, the popular vote by those at the concert hall and watching worldwide via the live webcasts.

The Crystal Award – third place – went to Sean Chen. This was the first time since 1997 that an American had advanced to the Finals. Chen’s pure joy in making music was evident in his performances of Beethoven’s Piano Concerto No.5 (Emperor) and Rachmaninov’s Piano Concerto No.3.

The winners each receive a cash award and three years of professional concert management. Time will tell if each of these accomplished young musicians will go on to a major career.