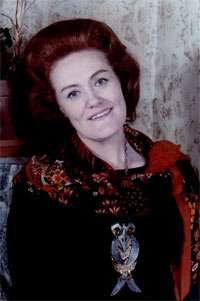 The death of Dame Joan Sutherland on 10 October 2010 has deprived the opera world of one of its most celebrated and yet down-to-earth divas. For many she will forever be associated principally with the coloratura roles of 18th- and 19th-century romantic Italian opera for which her dazzling technique and huge vocal range were perfectly suited. What set Sutherland aside from many others who sang and continue to sing this repertoire was the amplitude of the voice – she was a true dramatic soprano.

However, her repertoire was more varied. Together with her conductor- and pianist-husband Richard Bonynge she explored some unexpected corners of operatic history and because she had box-office draw this meant that some of these rarities saw the light of day in full and often elaborate productions. Luckily some of these roles were also recorded for posterity, and for this medium she occasionally undertook roles she was less or unlikely to tackle in performances. After her farewell to the stage she was still active and many young singers will have benefitted from her masterclass sessions. She was a regular visitor to and member of the adjudicating panel for the BBC’s Cardiff Singer of the World Competition. In her masterclasses there and elsewhere her genuine enthusiasm, sense of humour and easy persona always made these sessions fun for participants and observes alike.


Her career might so easily have taken a different trajectory for she was initially set on a more dramatic and probably Wagnerian course. Her early vocal schooling took place in her birthplace of Sydney – her mother was a professional singer who had given up her career for marriage and motherhood, but who continued to practice and sing and encouraged the young Joan to do so as well. After winning a singing competition at aged 19 she started to train with other professional teachers and in 1951 headed to London to study at London’s Opera School of the Royal College of Music. Shortly thereafter she joined the Covent Garden Company, making her debut in the house as the First Lady in Mozart’s Die Zauberflöte on 28 October 1952. Her other early roles in the house were indicative that many in the management there saw a more dramatic career ahead for her for she quickly sang Verdian roles such as Amelia (Un ballo in maschera), Aïda and Desdemona, Micaela, Agathe, the heroines in Les Contes d’Hoffman and also her first Wagnerian roles of Woglinde and Eva.

Some of these indicate that her vocal dexterity was also recognised. She also undertook some (then) contemporary works – she was the first Jennifer in Michael Tippett’s The Midsummer Marriage (1955) and the also sang Madame Lidoine in the first UK performance of Poulenc’s Dialogues des Carmélites in 1958. Famously however it was her sensational performance on 17 February 1959 in the title role of Donizetti’s Lucia di Lammermoor conducted by Tullio Serafin in Zeffirelli’s new production that not only catapulted her into the top rank but which also heralded her change of direction of vocal career. A later performance of Lucia, on 26 February 1969, is now available on the Royal Opera House’s Heritage Series of CDs – and listening to it the beauty and freshness of the voice combined with easy and breathtaking virtuosity are indeed impressive but so too is the dramatic involvement.

By this stage Sutherland was being coached by Richard Bonynge who she had married in 1954, and he reportedly tricked her into singing higher than she thought she was capable of and also cultured her already impressive technique that had hitherto only been displayed in Mozartean and Handelian roles. Lucia quickly became the calling card with which she took the world by storm, but soon she was also in demand as a dramatic Donna Anna (enshrined in Giulini’s classic recording) and started to expand the bel canto repertoire whose revival had already been started by Maria Callas – a very different kind of singer, but interestingly one whose career had also started off with a dramatic soprano bent.

Bellini roles such as Elvira in I Puritani, Amina in La Sonnambula, and the title roles in Beatrice di Tenda and Norma were soon staples of Sutherland’s stage repertoire as were other Donizetti roles such as Maria Stuarda, Anna Bolena and later Lucrezia Borgia. Norma and the title role of Rossini’s Semiramide often saw her partnered with the equally prodigious vocal talents of Marilyn Horne. Their voices had a marvellous blend and both evidently relished this and pitting their musical embellishments to vocal lines against one another. Another important vocal partnership was with Luciano Pavarotti who frequently partnered Sutherland in performances and on recordings. Again their fresh, agile and sizeable voices both blended and contrasted well, and each had an evident enjoyment and pleasure in singing. Although many of the ladies that Sutherland portrayed were tragic ones she had a famously playful side, and her Marie in La fille du Régiment at Covent Garden was one of the first instances where she displayed her comic talents – partnered by Pavarotti.


However, the partnership that really mattered was that with her husband. Operas such as Delibes’s Lakmé, Meyerbeer’s Les Huguenots and Massenet’s Esclarmonde were revived from obscurity to showcase Sutherland’s virtuosity. Curiously, she never ventured much into the German repertoire and where her Zerbinetta would surely have dazzled. She also essayed several Verdi roles such as Violetta and Amalia in I Masnadieri and later in her career the Leonore of Il trovatore. It is arguable that these forays were less successful perhaps because Sutherland was not always the most dramatic of interpreters preferring to let the perfection of her vocalism tell and relay the emotion of the situation. In this respect she was a very different animal from Maria Callas who was prepared to sacrifice beauty of tone and accuracy for dramatic effect. Sutherland’s diction could also be somewhat cloudy; this, along with a certain similarity of some of her recorded interpretations, were criticisms occasionally levelled at her.

This was not entirely fair as she could be interpretatively innovative when undertaking some roles outside her comfort zone. Her Turandot, conducted by Mehta, is a far cry from the steely or icy portrayals of tradition or of the likes of Birgit Nilsson in that a vulnerability of the character is evident early on. In this recording she was not only partnered by Pavarotti but also the Liù of Montserrat Caballé. Joan Sutherland leaves behind an impressively varied discography, with some roles recorded more than once and which show that she did refine and adapt her interpretations. In recent years some ‘off the air’ performances have become available such as her early Woglinde in the Royal Opera Ring Cycle of September 1957 under Kempe (Testament) which makes interesting listening. There are also a significant number of films and videos of some her performances, often in some of her lighter or more unusual roles, which are evidence to her artistry in the latter period of her career. Search hard enough and you can also find clips and videos of the children’s programme she hosted, “Who’s afraid of opera?”, in which she explained to some puppet characters the plots of an interestingly eclectic selection of some of the operas she sang in.

Her later stage career saw her appear rather infrequently at the Royal Opera House; she returned to the Lucia di Lammermoor production in 1985 to reprise the title role, still staggering vocally, and partnered by the equally ageless Carlo Bergonzi as Edgardo. A few years later she returned as Anna Bolena in a rather overblown staging, and by which time her voice was beginning to lose some of its flexibility and reliability. Her final appearance in the house was on New Year’s Eve in 1990 where she, Horne and Pavarotti entertained the guests at Prince Orlofsky’s Ball (Die Fledermaus) in a memorable Gala interlude that felt like one massive family party, and when all the natural humour, generosity and charm of this homely diva radiated across the footlights.