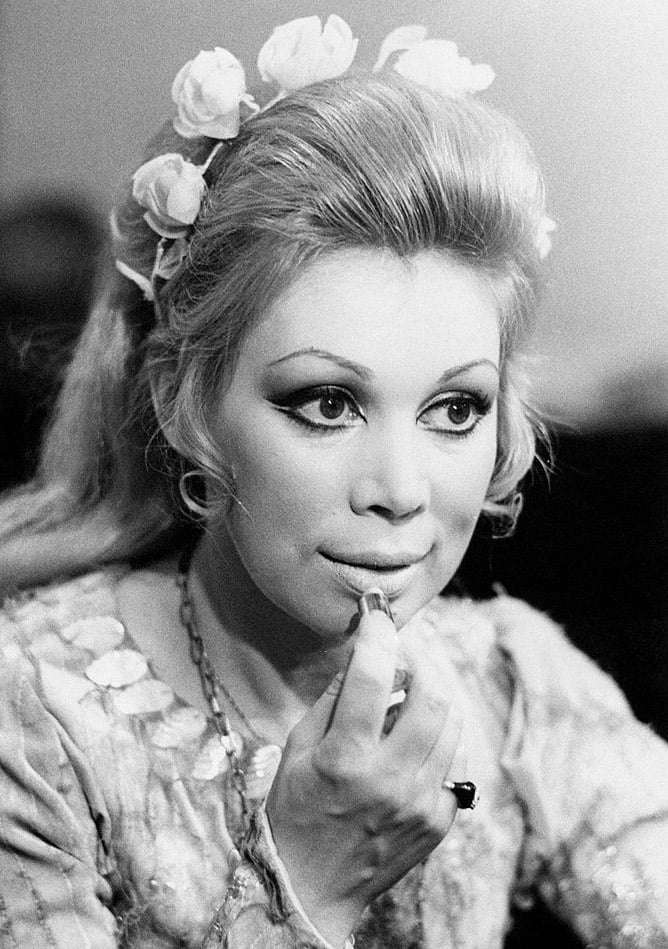 Mirella Freni was an open-faced, wide-eyed soprano who exuded enormous charm, dignity and integrity throughout her long career, and who imbued most, if not all, of the characters she essayed on the operatic stage with those strong personality traits. Her extraordinarily long career, artfully managed to ensure her gleaming and well-schooled voice remained flexible and lustrous to the end, rarely saw her undertake roles that were perhaps one step too far. When this did happen, she usually dropped these parts quickly and without much ado. She knew her art and her instrument well. She surely passed the importance of such self-awareness to some of her students. This is not to say she did not challenge herself throughout her career, but each new assumption was carefully introduced and at the right time. She apparently gave great study to any role she considered and by her own admission decided many were not for her; she was sometimes known in the profession as ‘La Prudentissima’. Never flamboyant as a stage performer she had natural poise and sincerity, acting as much with the voice as physically, colouring and phrasing in a way that accorded perfectly with the text and predicament of the character. Nor did her portrayals become routine in any way – she sang some roles throughout her career (Puccini’s Mimì particularly) and as the voice matured so the interpretations and their veracity adjusted accordingly. Professionality personified, she was adored by colleagues and audiences.

She was born in Modena; her parents were a barber and, suitably operatically, a cigarette factory worker. Pavarotti’s mother worked in the same factory and the pair shared the same wet-nurse, as well as their Mantua-based first singing teacher Ettore Campogalliani. Singing was apparently in the genes, for her great-aunt was the soprano Valentina Bartolomasi, who made one of the early recordings of Verdi’s Aida in 1919. A musical prodigy, Freni started to perform as a child, but after hearing her perform Butterfly’s aria from Madama Butterfly for a radio competition she was advised to restrain from vocal lessons until her late teens by none other than Beniamino Gigli. Her remarkably successful official stage debut was at the age of 20 in Modena as Micaëla in Bizet’s Carmen, a role retained in her repertoire for many years. That same year she married her then singing teacher Leone Magiera and they started a family.

Her next notable engagements were in the Netherlands as Liù and Mimì, and in 1960 she appeared as a lively Zerlina in a Glyndebourne staging of Don Giovanni, returning two years later as Donizetti’s Adina. In between she made her Covent Garden debut as much-praised and ethereal Nanetta in Verdi’s Falstaff, alongside Geraint Evans in the title role, Regina Resnik, Luigi Alva, Mariella Angioletti and Josephine Veasey, conducted by Carlo Maria Giulini. Other roles in those early years included Mozart’s Susanna, Massenet’s Manon, Gounod’s Marguerite (Faust), and Mimì which she sang in a famous La Scala staging by Franco Zeffirelli under Herbert von Karajan in 1963, later filmed for posterity.

An early attempt at Violetta at La Scala was fraught owing to audience factions, though she returned to the role successfully in 1967 under Giulini at Covent Garden in Luchino Visconti’s famous staging. Karajan liked working with her, and persuaded her to take on slightly heavier Verdian roles such as Desdemona, Elizabetta de Valois and finally Aida. Although the voice had darkened, she defied convention and sang these roles as essentially lyric ones making them work for her, although Aida was quickly discarded. When she declined to sing Turandot for him their professional relationship ended. Other Verdi roles at La Scala included her touching Amelia under Claudio Abbado in Giorgio Strehler’s landmark staging of Simon Boccanegra for La Scala which visited London, and Elvira in Ernani for Riccardo Muti – a role she later admitted was wrong for her voice. Puccini and later verismo operas started to enter the frame. She performed Butterfly for a film and several recordings but declined to undertake the role on the stage. Tosca featured rarely. However, Puccini’s Manon Lescaut, a role she described as one of Puccini’s hardest, was a successful later addition to her repertoire, as was Cilea’s Adriana Lecouvreur, where her performance was subtly devoid of actressy histrionics.

In 1978 she had divorced Magiera and married the Bulgarian bass Nicolai Ghiaurov with whom she had often performed. He apparently encouraged her to essay roles in Tchaikovsky opera so that she added Tatyana from Eugene Onegin which, bravely, she sang at the Bolshoi, the first non-Russian to do so. Tchaikovsky’s Lisa was soon assimilated, and her final new role was the heroine of his opera The Maid of Orleans, Joan of Arc, which Freni sang at the age of 70.

We are fortunate she leaves a significant recorded and film legacy. These chart the subtle development of her voice over the years remarkably well; the best of them were usually allied to significant productions of their period. Her vivacious side is perhaps best captured by her Susanna under Colin Davis where she is the lynchpin of a good cast of the time – one that includes the late Jessye Norman as the Countess. Yes, styles of Mozart singing have changed since, but this is a great, imaginative and finely sung interpretation by the most exacting standards. She made a film of the role too. Some of her Puccini roles she recorded twice and often the earlier versions are the more touching for their seeming artlessness. It’s hard not to be brought to tears hearing her Mimì’s wistful ‘Sono andati’ under Thomas Schippers. Similarly, her searing Butterfly for Karajan is generally preferable to her account under Giuseppe Sinopoli, although both have fine and different interpretative elements.

Her impassioned Amelia (Simon Boccanegra) was caught on film and record, as was her feisty if flawed Elvira. Both her Luisa Miller and Elizabetta de Valois were filmed at The Metropolitan Opera, New York, and show her ability to bring out the inner emotions of these ladies despite the oppressive social or royal conventions that surround them. Her Desdemona was recorded commercially but can also be heard in an off-the-air recording from La Scala under Carlos Kleiber, with Plácido Domingo and Piero Cappuccilli. Manon, Tosca, Liù were all committed to disc, as were her Zerlina, Nanetta, Micaela, Marguerite, Adriana, Tatyana and Lisa. Other roles recorded only were Verdi’s Leonore (La forza del destino) and Rossini’s Matilde (Guillaume Tell) under Muti and Riccardo Chailly, respectively. Some Donizetti opera, Verdi’s Messa da Requiem, and even some Handel, features in her discography. What remains the constant is the firmness of the tone, the delicate and nuanced phrasing and that unmistakeable burnished tone with its fascinating range of colour. An exceptional artist.

On retirement from the stage she became a respected vocal teacher. She won many important awards and honours including the Italian Cavaliere di Gran Croce and the French Légion d’honneur.