Chandos’s exploration of British orchestral music shows no signs of slowing down, and has recently added a new name to its catalogue, that of Christopher Gunning (born 1944). Primarily known up until now as a film composer, Gunning has, in fact, long had classical tuition, always working in a style that has reflected that.

Our meeting begins with a chat about this recent release (in May 2009), which couples Gunning’s Third and Fourth Symphonies with his Oboe Concerto, written for his daughter Verity. “It is very well played”, he says, with obvious satisfaction, “and I think they came up trumps with it. It’s a very clear recording, too. Chris Dibble was the engineer, and he’s the person I try to work with wherever possible.”

The Third symphony is notable for its open-air sound, an aspect Gunning readily acknowledges. “There is, and there was, so much going on in my mind and in my life at that time. I don’t know quite where it all came from! I explained some of this in the booklet note, but what had happened with the Third Symphony was that my wife was terribly, terribly ill, and it wasn’t thought that she would recover. That’s quite a long story in itself, but she was stuck in the Ukraine, in a hospital, having two operations. She was on a life-support machine, but then she failed to recover from the operations until two years later. The transformation has been quite incredible, but in the midst of all that I was diagnosed with a heart condition. So, from everything going along quite swimmingly, suddenly everything was collapsing around me. And so the first thing I decided that I wasn’t going to do any more was composing for film. 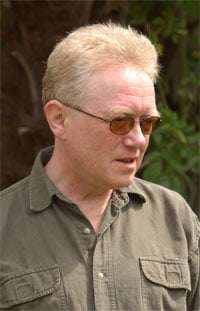 “I’d been coming round to that frame of mind for years, and I thought: ‘right – no more’. So I got to work on this [pointing to Chandos’s release], and one of the things that was recommended for my particular condition was getting lots of exercise, which shows how the thinking has completely changed medically over the past twenty years. Whereas before I might have been stuck in a sanatorium, now it’s a get-up-and-go thing. If it’s to do with the heart, treat it as a muscle that needs exercise. So that’s what I did, and one of the places I used to like to go was the Brecon Beacons. It was totally exhausting getting up there!”

One of Gunning’s first composition teachers was Edmund Rubbra: “That was during the first three years that I was at college. Edmund would teach along extremely traditional lines, and when you know his music, he’s one of that group – along with Vaughan Williams and others – who were looking to establish something that was a bit British, perhaps a bit simpler, although I don’t know that he was working in the way Vaughan Williams did. He went further back, and was very keen on Palestrina and Thomas Weelkes, William Byrd also; he was an absolute expert in that sort of counterpoint.

“What I would say is that after three years I did feel the need for change. I was writing twelve-note music, and so to find all about how to do it I needed someone that suited that way of thinking, and Rubbra did not. So I went and had lessons with Richard Rodney Bennett, and that seemed to be a good idea because of his interest in film.”

Gunning’s interest in music for the big screen had already been awakened as a child: “It started when I went to see [the Walt Disney film] Bambi, and I was in floods of tears because it was the most wonderful thing I’d ever seen as a boy, and I was very conscious of the effect of the music.” His other teacher was Dr Brian Trowell: “He was supposed to be coaching me for a bachelor of music degree, but his lessons involved going back through music history – we went from mediaeval music to the present day. It was a very hands-on approach.”

In the main, Gunning warmed to composition without the guidelines of a film script: “Once or twice I must admit I did wish I had a director to tell me what to do. Composing is a very lonely business anyway – when you’re doing this you’ve got absolutely nobody, apart from anyone who’s knocking around the house, and they’d rather be listening to Radio 1 anyway! The main difficulty I faced was whether I acknowledged traditional forms developed over the last hundreds of years, or if I did chuck it all out how do I structure things? For the most point in film you turn it on and off where you like, and that’s the thing I was trying to address.”

He elaborates in the case of the Third Symphony: “I don’t suppose it was original”, he says modestly, “but I came up with a set of variations that I don’t think the casual observer is going to be able to connect, but I know the connection exists. I adopted a similar sort of procedure in the Fourth, but I desperately wanted to write in a tonal way.”

We talk through music – Gunning loves Rachmaninov’s Symphonic Dances, and expresses admiration for Steve Reich and John Adams. I ask if he feels there is an American influence in his orchestration – the open textures of Copland, perhaps? “That’s interesting. I think it probably does sound a bit more American. I like American music very much – Aaron Copland, obviously, and Carl Ruggles, too. Virgil Thomson is a composer I like, very much more than someone like Charles Ives. I don’t quite know what people get from him, sometimes.”

He goes on to relate an amusing story about a performance of Ives’s Fourth Symphony, in a sense making his point as he does so: “We performed it at college, and I was playing percussion. In the last movement, which is a sort of funeral march, the percussion does totally different things from the rest of the orchestra. In all the rehearsals it was fine, but in the performance I was playing two gongs. The man next to me was counting through his breath the whole way and when it came to the concert he counted five by accident instead of four, so nobody knew exactly where we were, and it carried on like that for the rest of the concert! I couldn’t tell what anybody else was doing, so we got quieter and louder with the orchestra, were bashing away and finally finished. Some of my friends saw the funny side, but then one of the papers the next morning commented on the brilliance of the percussion section, when we really didn’t know what we were doing!”

The Oboe Concerto completes the Chandos release, written for Christopher’s daughter Verity. When asked if it reflected her technical ability or personality, the answer is twofold: “It’s a bit of both. She’s twenty-two next birthday, and I wanted to write something for the oboe that’s practical and enjoyable. When you take Verity’s personality it’s an absolute delight, and I thought of her unique sense of humour and the practical jokes she plays. I think she’s a really excellent oboe-player, so I had the sound of her oboe and her personality going through my mind. The other thing she does well is hold the line really beautifully, so I wrote for that in the slow movement, in the lyrical side of it.”

Gunning talks of the influence on his music of Alan Bush: “Nobody knows his music very well, and it’s such a shame. As an individual and human being he was lovely, and his music became more progressive. He gave me a few lessons when I was thirteen or fourteen. I went along to this class, and all the people were in their fifties and sixties and I was this little kid. He showed me how to write really, because I went along to one class and said ‘I can’t write this piece, because I’m really struggling over writing the introduction.’ And he said ‘Excuse me asking, but how can you write the introduction when you don’t know what you’re introducing?’ And that really stayed with me, as far as the Oboe Concerto. So when you put it in context with the whole thing, if the last movement lets it down, it’s terrible. It’s perhaps okay for the first movement to be less in temperature, but at some point you’ve got to deliver! You can’t always do it but sometimes it is better to start at the end.”

Gunning anticipates further releases of his music, and a sequel to the Chandos release: “We’re doing that at the moment, and that will be of my film and television stuff, as part of Chandos’s film series. That will be with the BBC Philharmonic, and I probably won’t conduct that one – Rumon Gamba will, they have an inseparable relationship; he seems to be their film man! People tell me he’s really awfully good. As to what’s going to go on it, I don’t know. It could be some of the bigger scores. There’ll have to be some Poirot on it, so there might be some of the individual episodes – Pollyanna as well, and Firelight. If you add those together there’d be almost a CD’s worth. I really do think Chandos are the best company; they’re so direct and straight about things. I think they are staying true to their original values; they’re still doing new music. They’ve put all this together and as soon as I saw the suggestion I really wanted to go with it.”

With that our interview finishes, Gunning revealing plans of another long walk with his wife. After the extremely strenuous circumstances around the composition of his Third Symphony, it is happy to report that he looks in good health and is in good spirits, perhaps ready to add further to his symphonic canon.