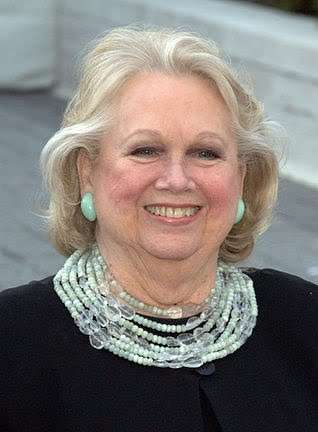 Barbara Cook had one of the best voices ever heard on Broadway. Largely unknown to the general public, possibly because she never appeared in a feature film and did few television appearances, the American actress with the magnificent lyric-soprano voice was the toast of Broadway in the 1950s and then reinvented herself from the 1970s to become a star of concert and cabaret. She toured the US with her one-woman show singing what has become known as the Great American Songbook, the standard repertoire from Irving Berlin, Jerome Kern, the Gershwins, Cole Porter, Harold Arlen & Johnny Mercer, Jerry Bock & Sheldon Harnick, Lerner & Loewe, Rodgers & Hart, the lyrics of Dorothy Fields and Oscar Hammerstein II and, naturally enough, the work of Stephen Sondheim for whom she sang and recorded definitive versions of his theatre songs.

Barbara Cook was born on 25 October 1927 in Atlanta, Georgia, the daughter of Nell Harwell and Charles Bunyan Cook. For most of her childhood she lived with her mother after her parents divorced. Mother was a strong influence on Barbara and, although Nell’s daughter had always sung from her childhood days, Barbara originally had no intention of becoming an actress. She trained as a stenographer but when she and her mother went on a trip to New York in 1948, Barbara was determined to become an actress. Acquiring an office job in New York, she stayed and took in all the theatre shows and club cabarets she could muster until she finally secured work in the smaller clubs, eventually reaching the dizzy heights of New York’s Blue Angel club in 1950.

The following year saw Barbara in her first Broadway show, the Sammy Fain-E. Y. Harburg musical Flahooley, a short-lived production but it introduced the voice of Barbara Cook to the New York theatre. Later on there was a revival of Oklahoma! and then television occupied her for a time until the revival of another Rodgers & Hammerstein show, Carousel, in which she played Carrie Pipperidge. A further revival of the show saw Cook playing Julie Jordan. In between times she was in a new production, Plain and Fancy, Albert Hague and Arnold Horwitt’s musical about the Amish community which had a healthy run of almost five-hundred performances. The song ‘Young and Foolish’ became a hit.

In 1956 she created the role of Cunegonde in Leonard Bernstein’s Candide based on the novel by Voltaire. With multiple contributors to the book and lyrics (including Lillian Hellman, Dorothy Parker and Stephen Sondheim, among others), the piece never really gelled at first, but Barbara Cook’s singing of ‘Glitter and Be Gay’ was a personal triumph and showed her talent for high lyrical work to be absolutely exquisite. She excelled yet again as Marian the librarian in Meredith Willson’s The Music Man with Robert Preston in 1957. He retained the part for the 1962 film version, but the Cook role, which had won her a Tony Award, went to Shirley Jones because Barbara was an unknown quantity for the film industry. Her only cinema film was recording the voice-over as the Mother in the animated feature of Thumbelina. Amusingly her musical director and accompanist for over thirty years, Wally Harper, wrote a song for Barbara with lyricist David Zippel called ‘The Ingenue’ about the singer’s early life and how, as she says, “Movie roles you’re born to play / They give to Shirley Jones to do”.

Cook was in a couple more musicals, The Gay Life and Something More!, but neither proved to be hits. However, success returned in 1962 for her in Jerry Bock and Sheldon Harnick’s She Loves Me, a musical based on the Hungarian writer Miklós László’s play Parfumerie. It was basically an operetta written with real elegance and style and, in the role of Amalia Balash, Barbara could really shine. It had a clutch of very fine songs, of which ‘Dear Friend’ and ‘Ice Cream’ became signature favourites that she retained in her cabaret repertoire. Her co-star was Daniel Massey as Georg Nowack and between them they played a shy couple who hate each other in real life but fall in love through the exchange of anonymous letters. The same plot formed the basis of Ernst Lubitsch’s 1940 film The Shop Around the Corner, with James Stewart and Margaret Sullavan which was remade in 1949 as the musical In the Good Old Summertime with Judy Garland and Van Johnson, and then in 1998 as You’ve Got Mail with Tom Hanks and Meg Ryan.

After She Loves Me there were more musical revivals for Barbara including Fanny, The King and I, and Show Boat, and she also toured in The Unsinkable Molly Brown and Funny Girl as well as appearing in straight plays such as Muriel Resnik’s Any Wednesday, Jules Feiffer’s Little Murders and Maxim Gorky’s Enemies. A flop production of The Grass Harp, a musical version of Truman Capote’s book, in 1971 appeared to bring Cook’s musical theatre career to an end. In 1988, however, she was in the Royal Shakespeare Company’s musical version of Stephen King’s novel and film Carrie, but Barbara left the show before it moved from Stratford to New York.

She had divorced her husband David LeGrant in 1965. They had married in 1952 and had a son, Adam. On her own and with little or no work Barbara began her problems with depression which led to alcoholism and weight gain. However, she gave up drinking in 1977 but the weight problem dogged her for the rest of her life. She looked heavy but luckily it didn’t affect her voice which remained pure and clear, and her enunciation was always perfect. Fortunately she was discovered or re-discovered by Wally Harper, a musician, composer and arranger for such shows as Company, The Grand Tour, My One and Only, Nine, and Grand Hotel, and it was he who put Barbara back on the road, literally, and invented a new career for her as a concert and cabaret artist.

Without Harper she would not have had the opportunity to shine again at the thing she did best, which was to interpret or re-interpret the Great American Songbook for a new generation. Following a few practice gigs, Barbara and Wally played New York’s Carnegie Hall on 26 January 1975 and the concert was released as an album. They were a sensation and for the next thirty years Cook and Harper toured internationally while also releasing some classic albums of songs arranged by Harper. Sadly Wally died in 2004 and Barbara was virtually bereft because at that time he must have been irreplaceable. However, she did find other arrangers and musicians she could work with and her career continued more or less non-stop until shortly before her death. She had announced her retirement earlier in 2017.

In her memoir Then and Now, published in 2016 by HarperCollins, Barbara paid tribute to her musical partner: “Wally understood exactly how I sang, and our musical partnership evolved into a shorthand that was closer to musical telepathy.” In his obituary of Harper in The Independent Tom Vallance quoted Barbara; “He [Wally] was a great friend. If you were in trouble he would be there for you in an instant. He enriched the lives of many, many people as a friend, and his work did the same for untold thousands.”

The Carnegie Hall album led to many others over the years, including It’s Better With a Band (title song by Harper), The Disney Album, Close As Pages in a Book, a tribute to the lyrics of Dorothy Fields, Barbara Cook: Live from London, recorded at Sadler’s Wells (with my own applause on it), Oscar Winners: the lyrics of Oscar Hammerstein II, The Champion Season: a salute to celebrated director and choreographer Gower Champion, Barbara Cook’s Broadway, and Mostly Sondheim: Live at Carnegie Hall (on both CD and DVD) in which Barbara sings many of Sondheim’s most famous numbers plus some of the songs he wished he had written. They include ‘Buds Won’t Bud’, ‘The Eagle and Me’, ‘I Had Myself a True Love’, ‘I Got Lost in His Arms’, ‘The Trolley Song’, ‘When in Rome’ and ‘San Francisco’. Barbara paid homage to Harper in her album simply called Tribute, with new arrangements of songs they had performed together. In all she recorded over twenty solo albums and another twenty cast-recordings plus three compilations.

London was lucky to see Barbara Cook in concert and cabaret, firstly at the Country Cousin venue in Chelsea, then at the Donmar Warehouse in Covent Garden, the Albery Theatre, the Lyric Shaftesbury Avenue, Sadler’s Wells Theatre, the Barbican Centre, the Royal Albert Hall, the Theatre Royal Drury Lane and the London Coliseum. She came to London in 1986 shortly after the BBC’s programme about the making of the Sondheim Follies concerts at Lincoln Center. She was in thirty and more theatre shows, the last being Sondheim on Sondheim in 2010 and then carried on in cabaret until she retired in 2017.

The world is a sadder place without Barbara Cook and Wally Harper. Together they contributed immensely to our appreciation of classic, popular American songs, their composers and their lyricists. Between them they had the enviable ability to get things just right and, as we often find out, that is not always easy. Barbara and Wally – a class act indeed.