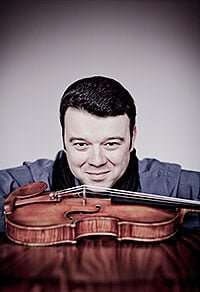 On July 25, when violinist Vadim Gluzman steps out onto the stage of the Royal Albert Hall, it will be his first chance to experience all the atmosphere of the Proms. “All my friends who have ever played there say this is the most attentive and most enthusiastic and knowledgeable group of people they’ve ever been in front of”. Vadim marks his Prom debut with a work close to his heart, Prokofiev’s First Violin Concerto.

“This is the closest I will get to being in a fairy tale. A lot of Prokofiev’s music has this quality. What is absolutely unique about Prokofiev’s instrumental music – and this piece in particular – is that we can dream up our own tales.” But many of Prokofiev’s subsequent works for the violin are darker and more angular in tone; does Gluzman feel this shift, I wonder? “Listen to the opening movement of the Second Sonata or the second subject of the Second Concerto – which was written close to the time of Romeo and Juliet – and the slow movement, which I’m just as happy to sell my soul for as I’m happy to sell my soul for the opening of the First Concerto. I think what happens later with Prokofiev is that he adds this harsher mechanical excitement to that of the dream, while in the First Concerto the dreamy quality is maybe predominant, but I would not say he ever lost his fairy-tale roots.” 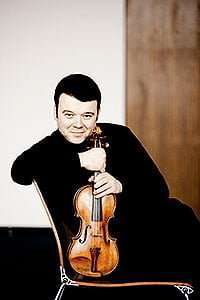 That Gluzman feels such a natural affinity for this music is perhaps unsurprising. He was born in the Soviet Union (in modern-day Ukraine) in 1973, but his family moved to Riga, Latvia, shortly afterwards. “I started playing the violin there, so I come from the same roots as Gidon Kremer and (cellist) Mischa Maisky”. Gluzman’s early tuition began there and he was quickly inducted into the Soviet music-education system; a hard and competitive environment that either made or broke young musicians. “Growing up in Latvia was slightly different from growing up in Russia or Ukraine. It was part of Soviet Union but the culture and aesthetic of human relations were still not so much broken. I think there was not enough time to break them. Latvia was occupied 1940 whereas everything else was 1920 or 21. But the pressure was tremendous and the pressure of expectation we all shared. From one side it gives you an incredible stimulus, but stimulus is often not healthy psychologically. But I also remember something fondly now, the professionalism of the education system, and as difficult as it was for a seven-year-old kid to grasp that you are now a professional musician and should act accordingly and study accordingly, but I would not be where I am now if not for those years. So yes it was terribly difficulty. Would I wish it for my daughter? God, no! Or anybody else, for that matter.”


During the late 1980s, Gluzman moved to Siberia, where he studied under the great Zakhar Bron – teacher of Vadim Repin and Maxim Vengerov – before moving to Israel, a year before the Soviet Union’s collapse. Over the next decade, he began associations with contemporary composers and remains certain of the importance of new music. “New music is something I feel is my duty: there is no other way to find the next Beethoven unless we try and unless we present the new music to the public and let the public face it and feel it. I don’t think our art will exist if we don’t do this. It will become, as it is in danger of becoming, a museum artefact.”


Gluzman has enjoyed fruitful collaborations with composer such as Lera Auerbach, who is currently composing a concerto for Vadim, but although his roots are in Russia and its former territories, he does not feel drawn only to the music of those countries. “I do not discriminate. I do not like nationalising music. Music is the most universal language. I think that it is just a life-fact that my circle is heavily influenced by Russian musicians. But what excites me most of all is playing new music, whether it is Russian or Chinese or Spanish, I do not care. I have premiered works of American composers, of Russian composers, of Estonian and Georgian and German. Music belongs to the world.”

While Vadim collaborates alongside those contemporary composers who excite him most, his discography continues to grow. With the Swedish label BIS, he has recorded many Russian works and some of the staples of the Romantic repertoire, such as concertos by Bruch and Tchaikovsky. A disc of solo violin music is to be released imminently, bringing Gluzman face to face with one of the greatest challenges of the violin repertoire: the music of J. S. Bach. Recording it proved to be a daunting prospect. “I remember standing under the microphone and freezing, thinking ‘who gave me the right to record this?’” And then to a work he feels is undervalued: Shostakovich’s Second Violin Concerto. “This is the composer that makes me lose my sleep. It is my pain; I don’t know how better to explain it. I wake up and it’s still playing in my head.”