Composer of the Week launched (as This Week’s Composer) on 2 August 1943 and is one of the longest-running programmes in radio history. On Friday 2 August 2013, Donald Macleod will invite listeners to suggest names of composers who have not previously featured in the programme. Donald and the team will pick one of the composer suggestions to be the subject of a special Composer of the Week broadcast this Christmas 2013. The first ever composer of the week was Mozart and the programme that falls on the anniversary day is an exploration of Schumann. 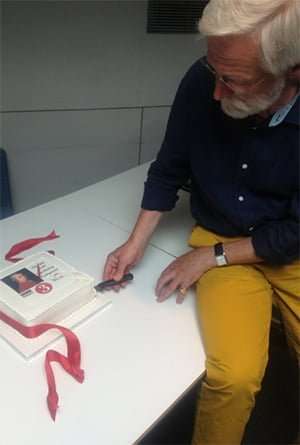 So, seventy years, Donald. How long have you been presenting Composer of the Week?

“Since 1999. I’d been working unobtrusively on Radio 3 for nearly thirty years. I used to be an announcer, one of the team working alongside the greats of Tom Crowe and Peter Barker. It was awesome working alongside people like that with voices that were respected around the country. I have a very ordinary voice. Crowe and Barker were both heavy smokers so that may have helped develop that darkness in their voices. I did that for a time, but thought that I can’t go on doing this forever, so I went into management, and was a presentation editor for a number of years. And then I had the opportunity to set up Through the Night. That took about two years and then I had the opportunity to leave the BBC and go freelance, which I did about sixteen years ago. Initially, I did a programme called Sound Stories, and then Roger [Wright, Controller of BBC Radio 3] asked me to do Composer of the Week. I gulped and said that I didn’t think I could do all of it, and could I possibly do a bit of it. The answer was: “no, all or nothing.” So, it was really scary to do that to begin with. It had been a variable product, and no one person had done it before. It might be one presenter for one week, with a script that a producer had written. Or it might have been a leading expert, world authority on A, B or C. So, stepping into those shoes was terrifying, frankly, because I don’t have that depth of knowledge about any composer, let alone one. But, with a huge amount of help from my production team from that day to this, I have navigated my way through.”

The history of Composer of the Week is…

“It started out as This Week’s Composer on the Home Service. And then it went to the Third Programme when Broadcasting House was divided up into different rooms, and its run is unbroken in seventy years.”

How do you choose the composers?

“This is the BBC, so it’s done in a committee kind of way. My production team is based in Cardiff, and in September we throw our various hats into the ring. There is a core, a mighty handful, who get an annual outing, and then jostling for space are the other composers. There are fourteen new weeks every year. There will be anniversaries – the BBC loves an anniversary – and if you can hook one of those that improves the chances of a composer getting in. Then we argue the case for people we’d like to do. Perhaps neglected or something interesting has happened, maybe a book has come out. It then goes to the editorial team at BBC Radio 3, and often comes back with ‘rejected’! So, one finds another way.”

What type to programme do you aim for?

“Generally single-focus. The ones where we put two composers together I find the least satisfactory, because it may be five hours of broadcasting, but to do justice to two composers in one week is uncomfortably challenging. Sometimes they do work: Gordon Jacob and Joseph Horowitz worked really well because Horowitz knew Jacob and could talk about him. Other weeks have been not that good: Richard Addinsell and Noël Coward had enjoyable music, but there was not much to appreciate otherwise. Other weeks have had groups of composers working together in the same place: Music at Versailles, for instance. The programmes that get me out of my study are terrific. The Versailles week was one of the best things I have ever done. There’s a baroque specialist there called Olivier Baumont, and he got us in on a Monday when the palace is closed to the public, so the first time I set foot in the Hall of Mirrors there was no-one else there. He’s an amazing man who has a real feeling for the place, and he spoke about the music-making there over several centuries with such knowledge. We got into the room where Mozart played to the Royal Family as a child. We also had access to the retiring room for the choir in the Chapel Royal, which is now a disused room, full of music stands and lockers.”

Take us through the preparation for the show…

“I don’t do the research myself, so my terrific team in Wales will work on the programmes for about two weeks before they send me a box full of material, which I receive on a Friday morning. Sometimes it’s a slim package if there’s not much available; the week on British Film, for example. The mechanics of the thing, constructing five programmes where you have fifty minutes with ten minutes of me is a complicated business. You chose a musical path through and then find the music which exemplifies what is being said. The thing that keeps it fresh and varied is that they have different approaches: sometimes it is research which is route-mapped and grid-referenced or fleshed-out, or it might have too many pointers in all sorts of directions. It varies from producer to producer: some are very good at knowing the sorts of things that will get my attention and that I’d want to explore. But, then, very often, there is no obvious way into something, and that’s where I like to bring in my range of interests, especially visual arts and architecture. From our audience research, whilst most people will go to one or two concerts in a year they’re more likely to go to museums, galleries, and exhibitions, so I try to hook people in with those visual images. But then you have to guard against being too time-specific as the programmes are often repeated.”

Is Composer of the Week education or entertainment?

“I don’t think of it in those particular categories. I have information to convey. I choose things which interest me. I think of myself as a typical listener. I know a certain amount about something and people, and nothing about others, and I hope that I manage to convey the information in an engaging way. I have no formal musical qualifications: the reason I do this is that I love music and I love talking about music.”

How far ahead do you work?

“The lead time used to be a lot longer, but these days broadcast is about a month ahead of recording. I know what I am doing up until April 2014.”

Has any composer been a surprise, or a disappointment, to you?

“I can’t think of anyone who has turned out to be less interesting. Some are frustrating because there is little known about their lives, so then I provide context. I’ll search for stuff, and find out what life was like at the time, what was Rome like when Giovanni Palestrina lived there, and so fill in the gaps like that. A fantastic book by Andrew Porter [A History of Medicine] allows one to work out the effects of diseases and treatments, and so provides a window into lives that way. People like sickness and illness, and medical things. A good death is always loved. Occasionally, I get people thrown at me that I know absolutely nothing about: Nikos Skalkottas was a case in point. Fascinating story, incredibly moving, a completely tragic life, whenever he had to make a decision he made the wrong one. The music is amazing. A musical life in reverse: from atonal to tonal. We can empathise with outside figures such as him. Another case was Danish composer Rued Langgaard, who was only possible because of a record label that had faith and recorded his stuff, so we had that to go on. His is an amazing story of someone who was out-of-step with his times.”

Were any of the earliest broadcasts, from sixty and seventy years ago, archived?

“No. It was a live programme, and storing stuff was too cumbersome. I can remember ghastly incidents as a broadcaster: Alan Rawsthorne, when he was done for the first time, I had the Monday programme. We had been evacuated from the normal studio, and I put the record on the turntable, an LP I remember [Third Symphony, Norman Del Mar conducting], and in the time it was lying on the table the disc dished, so I had to place a roll of Sellotape and a stapler on top, and it secured better contact. I was at the other end of the studio looking for a filler and it became obvious that the stapler was wider than the label, so it thumped against the arm. Some quick thinking rescued the situation!”

Who are the most-featured composers?

May we turn to the anniversary week itself. What is happening for the Second of August

“It’s a week of Schumann. We’re opening the week to the audience to ask for a composer who has not been featured before. Answers on a postcard! Tweets … to get to people. There is an on-line list of featured composers. It runs from Juan Crisóstomo Arriaga to Wales since the War to Alexander Zemlinsky. You often have to be imaginative with what’s available. It’s about their lives. Palestrina especially, there was no details. I get the listener to imagine they’re in the street with him at his time.”

You have a film music edition very soon?

“Fantastic scores! We won’t be taking the music apart, but the Hollywood stuff is amazing: relationships and tensions between composer and director are fascinating. The Week that I am just writing involves Muir Mathieson. Producer Alexander Korda wanted top-class musicians involved, which didn’t happen in the United States. There are amazing scores by Bax and Vaughan Williams. ‘You mustn’t be surprised if you find that the music you have composed to show the hero’s philosophical angst is used by the director to accompany scenes of chickens being shooed around a farmyard’, said Mathieson. The fascinating thing about the composers writing for Hollywood was the European émigrés. Even Schoenberg had an interview with one movie mogul, with a proposal that he would write a score. He wanted too much money, wanted to write his music first, and that a film was then put to it. A few exceptional cases exist of this. Last year I went out to LA to meet John Williams: a charming, modest and engaging man.”