Kevin Rogers visits a restaurant in the City of London where, during your meal, opera arias are sung by young singers who are students at local music colleges…

There are a couple Bel Canto restaurants in Paris (at Neuilly-sur-Seine and on the Quai de l’Hôtel de Ville) and now there is one in the City of London. The brainchild of Jean-Paul Maurel, these glorious conceptions allow diners to be entertained every night by student opera-singers who, rather than working as waiters elsewhere, sing extracts from operas while serving your supper. The singers can practise challenging arias while earning a decent wage (£12.00 per hour), double the normal rate.

Entering the restaurant is like entering a theatre. There are costumes from the Opéra National de Paris and the elevator’s interior has on each of its three walls a mock up of the Gran Teatru La Fenice interior. Once down stairs the dining area is separated from the entrance by a red curtain: all aptly theatrical. This is a performance, not just a dinner!

Most of the singers come from the Guildhall School of Music & Drama and the Royal College of Music. Jean-Paul has on his books approximately sixty singers and ten répétiteurs. The singers I spoke to before and during my supper were incredibly enthusiastic about the venture: “The opportunity to perform in front of an audience and to have feedback beats being at home singing in front of the mirror”, enthused tenor Alberto Sousa. There is also the money factor: “Having to pay about 300 pounds per month for my vocal studies and singing lessons means that I would otherwise have to work many more hours for much less at ‘normal’ restaurants”, commented soprano Christina Petrou. 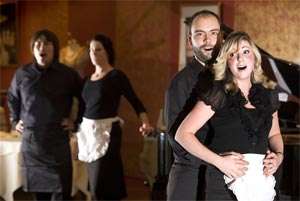 The working of the restaurant is very ordered. No food is served immediately before or during the singing, which occurs every fifteen minutes. Jean-Paul runs a tight ship and ensures that the chef is co-ordinated with the timings. Silence from diners is expected and Jean-Paul is not afraid to tell people to be quiet – quite rightly! Each night there are four singers and it is important to him that they are well-matched and varied, akin to a manager’s line-up for a football match.

The singers all have aspirations. Jean-Paul is a patron who is happy to help them finance their dreams, that he can nurture young talent that would otherwise find it difficult to juggle studies with paying the bills. Standards are very high. Auditions are scrupulous and are overseen by Jean-Paul’s Belarus-born wife, Antonina, the artistic director of Bel Canto. 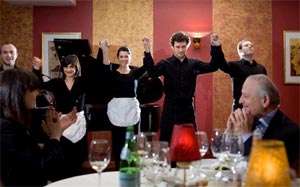 Customers’ reactions are very positive. What I found most seductive was to see and hear the singers close-up, and to be able to chat to them between numbers. On a couple of occasions the singers were right next to my table. The ‘Pa-Pa-Pa-Pa-Pa’ exchange from Mozart’s Die Zauberflöte (The Magic Flute) had the expressive baritone Stephen Wells skulking around the tables whilst Pagagena (Christina Petrou) was hiding at the other end of the room, responding furtively. This sort of interaction and movement gives the performances a genuine frisson.

There is a set menu (at £55.00 per head). I enjoyed some pan-seared pheasant whilst my companion had a delicious fillet steak. Some excellent and tender Foie Gras Medallions whet my appetite before the pheasant. With a glass of champagne, it was great to join in with the four singers for the nightly-rendition of ‘Libiamo ne’ lieti calici’ (Drinking Song!) from La traviata.

The price is a fair reflection of the venture: if you want to support talented singers then this is the place to go. It is also the place for an incredibly enjoyable evening, one, located one minute’s walk from Fenchurch Street Station, that is very easy to get to.