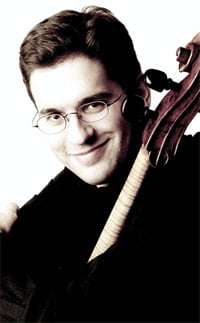 Christian Poltéra found time in his busy concert schedule to talk about his new discs of Camille Saint-Saëns sonatas, and concertos by Henri Dutilleux and Witold Lutosławski. We began by talking about Saint-Saëns, whose works for cello and piano are heard more often now than they used to be, despite still sitting in the shadow of ‘Le Cygne’. Poltéra has great enthusiasm for the composer and his larger scale works.

“I like both sonatas, although they are very, very different. So far I’ve played the first in concert more, and it works very well as it is very compact, and in fact reminds me of Beethoven. The second one is maybe a bit long for a concert, and I think it would have to be performed in the right circumstances, but it has so much to offer – especially in the variation movement, which is so original. It is also very unlikely, in the way it is written for the cello and for the pianist also. There are many more notes in the piano, but he knew both instruments so well.”

He continues his appraisal of the composer: “in the chamber music and the concertos you can tell that he knew what the cello could do. The first sonata and cello concerto are close together in his output, and so are the second sonata and concerto, which I find a slightly weird piece as well.” Does this mean the composer is more experimental than we give him credit for? Poltéra nods his head: “absolutely, he is often seen as being conservative or backward, yet in his own way he was very inventive and experimental, but just not in the way people would expect.”

At the time of our interview Poltéra and Kathryn Stott were soon to perform the first sonata at Wigmore Hall, alongside Beethoven – who was a strong influence on Saint-Saëns, though Poltéra modestly responds: “to be honest I’m not familiar with enough Saint-Saëns’s music – he wrote so much – to generally be able to make that point. I think he was very famous for playing Beethoven at the piano, and he played all the piano sonatas. With that first sonata being in C minor it’s hard not to think once or twice of Beethoven, and it is very dramatic, especially the first movement. That’s what reminds me of him with the drama, and it’s such a dense movement to play.”

Alongside the sonatas Poltéra has recorded some of the composer’s miniature pieces, demonstrating his versatility. “Saint-Saëns was a master of shorter pieces as well,” he says, “and I think they are charming but have some depth. ‘The Swan’ everybody knows, but I think the Romance is a lovely piece, and the Prière is a touching aspect all by itself, as he was an old man by the time he wrote it.” I mention the Allegro Appassionato, a piece played by many a young cellist learning the trade, and he smiles: “that piece I really don’t like as much, as I think it’s a piece you struggle with growing up as a cellist, and it takes you a while to get it out of your system. I had a similar feeling about Brahms’s sonata in E minor; it’s something you played a lot when young and it got butchered rather.”

Poltéra’s previous disc with Stott examined the sonatas of Saint-Saëns’s contemporary, Fauré, and he talks of the challenges for this disc as opposed to the more obviously Romantic older composer: “I could speak perhaps for both Kathryn and I, although she had already done a lot of Fauré. It took a lot longer with the Fauré to get an idea of where this music goes sometimes, as the movements are longer and the music can float around. You have to develop the sentence, and what to do with it, as well as the overall structure. That took us longer, I would say, to make it clearer. That’s a quality of Saint-Saëns, that he is so clear.”

Poltéra has recently recorded and released the cello concerto by Dutilleux, ‘Tout un monde lontain’, and I’m curious to learn if he feels the composer falls naturally into the line of French music. “I think he probably would agree with that,” he says. “I don’t know him personally unfortunately, but I would describe his music as being French, as it is colourful and precise, and very transparent. There are all these exotic harmonies, too, and the quality of the orchestration. It is extremely refined somehow – there is never an overload of sound. It is very particular, and maybe that’s French when you’re comparing him with someone like Ravel.”

He is also complementary about Dutilleux’s writing for cello: “when I had to learn it for a concert, I discovered that he knows exactly the instrument that he is writing for, and you discover that along the line it is worth it working hard on practising the cello part. With some composers you discover the things they are asking you to do are just not possible, and I lose motivation a bit when that happens. Whatever Dutilleux writes is actually possible, and it also makes sense.”

Complementing the piece on disc is the concerto of Lutosławski, a combination recorded by Mstislav Rostropovich, to whom both pieces are dedicated. “It’s a very strong piece”, says Poltéra of the Lutosławski, “and it’s extremely dramatic. It’s all about the individual, the soloist, being confronted with the big, collective orchestra. It also has hidden political aspects about it as well. He was struggling with the regime, and when he left his country later on he wanted to admit the meaning of the piece. I heard from my teacher Heinrich Schiff that he did actually explain the meaning of it later on. He wanted to insist that absolute music does not need a program or anything, but it is clear here from the structure that he has a certain program in mind. At times it is wild and rough, which is something that Dutilleux never is. For me these are the two main pieces for cello written after the Shostakovich concertos.”

The cellist has also recorded discs for BIS of the music for his instrument by Honegger and Martin. “So far with all these recordings for BIS,” he explains, “the aim has been to choose repertoire that I believe in, but that is maybe not presented so much. That has been the fun aspect of it, that people can discover these pieces. Because of these recordings I can suggest them to an orchestra and a promoter, and when I played the Frank Martin concerto last week in Berlin, nobody knew it. They were all surprised at the quality of the piece. Sometimes in these countries the music of one particular composer can be completely unknown, and it is my aim to change that a little bit. With Martin he is better known in Switzerland and perhaps Holland, but generally not elsewhere. In Honegger’s case it was not the concerto I discovered first, it was the Cello Sonata and the Duo, and then as the disc came together it made sense to have similar pieces on the program.”

His future plans mix traditional cello repertoire with more ‘fringe’ pieces. “I have been playing a lot in the concert hall, especially Schumann, Haydn and Dvorak, but I am playing more Martinu now, and I was actually approached by a promoter who asked me to play Bohuslav Martinů’s first cello concerto.” Another development concerns the instrument itself. “This next year I will also be playing on gut strings for the first time, and I’m playing the Brahms Double Concerto with the Orchestre Révolutonairre et Romantique. I would not have thought to do this, especially with the Brahms, as you might not hear the cello at all – it’s always a struggle in any case.”

Mention of gut strings inevitably leads one to think of Steven Isserlis: “I know he does this, but doesn’t like talking about it, as he’s been asked so often! I love his playing on these strings, as so often people struggle against a full orchestra. That does not seem to be the case as much now.”

Poltéra is a recent graduate of BBC Radio 3’s New Generation artist programme, and has an enthusiasm for the scheme when questioned: “I think it’s the exposure of playing on the radio so much that I really liked, and I was used a lot. The main benefit is the experience of doing these things, often at short notice, and also I think to learn so many new pieces. It can be quite stressful if you’re learning a new piece, or playing chamber music with some members of the team that you don’t know. Sometimes the pieces have to be put together very quickly, and you don’t play a single note through the series that is not recorded – there is always a microphone present, and that is a great experience as well.”

He talks of the demanding schedule, and the effects that has: “You do get thick skinned with the stress that comes out of it, and you often have to function not knowing a piece, a conductor or an orchestra. It is a great thing, though, and after it a real commercial recording seems relaxed!”