A box set of music is not just for Christmas (but makes a great gift), and the best is for Life. George Szell kicks-off and a selection of multi-disc releases will be added to The Classical Source periodically… 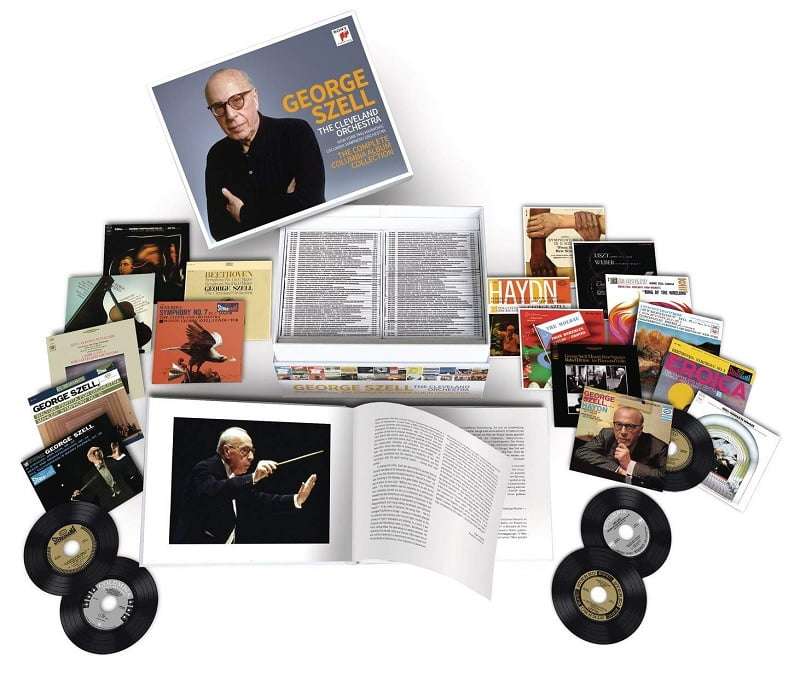 “Gentlemen, there will be no mistakes.” Those words may be apocryphal, but legend has it that’s how George Szell addressed The Cleveland Orchestra at the start of his first rehearsal as Music Director. Hungarian György Széll (1897-1970), brought up in Vienna as an aspiring pianist-composer, had already appeared in Ohio, and was given the top job from 1946 (the same year that he became a US citizen), retaining it until his death. He remains synonymous with the American ensemble (sometimes to the chagrin of his successors), which he inherited to some extent in post-World War Two doldrums and turned it into one of the greatest orchestras in the World, some commentators at the time saying the greatest.

Not that Szell was exclusive to Columbia or the Clevelanders in terms of recording, for his discography includes assignations in Vienna, Amsterdam and London for Decca and for Philips, but the bulk of his cherished legacy is enshrined in Sony Classical’s handsome Columbia Collection: and it’s all here, including mono and duplicate versions, with a few involving the New York Philharmonic and Columbia Symphony Orchestra, otherwise it’s Cleveland, opening with five Slavonic Dances (constants in his recorded repertoire, two stunning complete sets and further selections) set down in April 1947 followed by Szell’s own persuasive scoring of Smetana’s ‘From My Life’ String Quartet, and astonishing most of it is, a treasure-trove of inspired music-making contained on 106 compact discs, invariably replicating LP couplings and artwork. The individually slip-cased CDs are securely held in a stout box and the accompanying hardback book is comprehensive with information regarding discs’ contents (arranged both in their number order and by composer), recording dates, venues, and the LPs’ catalogue numbers – just as it should be for the collector and, in short, Sony Classical has done Szell totally proud and he deserves no less, for his supreme art transcends time, fad and fancy.

That substantial tome also includes numerous photos (look into Szell’s eyes and you see a man who cared fervently for the subject of his profession, and conversely he smiles as he duets on a piano with Victor Borge), prefaced by an article entitled “Thinking with the heart, feeling with the brain”, that heading based on Szell’s own comment, and there are also interesting interviews with him included on the final disc, spoken in fluent English from a man of intelligence, focus and passion.

I have no doubt that Szell loved music to his deepest being, expressive leeway abounds, and that building an illustrious orchestra was a means to an end – to express at the highest possible level his zealous pursuit of musical truth. He may have been a dictator, a tyrant and ruthless (these are others’ descriptions) – those interviews though reveal a man not short of wit or humanity – the objective being to reveal his chosen scores in the very best light and with the utmost respect for the composer’s notation. That said, part of the pleasure is the remarkable playing. Three examples will hold, from many – the first movement of William Walton’s Partita, Berlioz’s Roman Carnival Overture and that to The Bartered Bride – in which the execution is jaw-dropping in its precision and virtuosity; more than that there is a very personable quality that goes from the performers’ head/heart to a listener’s head/heart. There is nothing here that is not X-ray-studied by Szell or thoroughly rehearsed to the nth degree, yet there is naught literal or earthbound; rather the performances dig deep into a work’s potential – the music comes first rather than any ego. 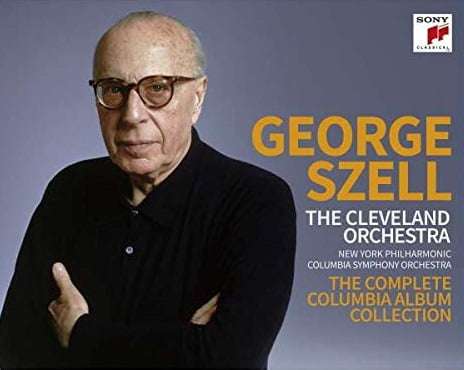 Which is not to say that everything comes off; for example, however brilliantly realised, the first recording of Schumann’s Second Symphony is hard driven, something Szell reined-in, to advantage, in his stereo re-make. The other regret is a paucity of exposition repeats, sometimes such losses seem parsimonious, although Szell can surprise in this regard – such as in the first movements of Mozart’s ‘Haffner’ Symphony (moreover not all publications include the instruction to go back) and Mendelssohn’s ‘Italian’ (second taping), the latter from a time when conductors usually omitted it (despite the copious lead-back bars), excepting Eduard van Beinum (Concertgebouw/Decca)

Let me now broad-brush the contents, which cover from A (Auber, Fra Diavolo) to Weber (Oberon Overture, twice), Wagner penultimate. Symphony cycles embrace Beethoven (including a desert-island ‘Eroica’, in the ultimate coda the Cleveland horns are let off the leash to thrilling effect), Brahms and Schumann, a goodly bundle of Haydn and Mozart, Bruckner 3 (magnificent) and 8 (altogether special), an inspired Mahler 4, Schubert’s ‘Unfinished’ and ‘Great C-major’ Symphonies (the Finale of the latter features remarkably athletic and unanimous violins) and plenty of colourful favourites – Firebird (1919 Suite), La mer, Daphnis and Chloe Suite 2, Hindemith’s Weber Metamorphoses (twice), Pictures at an Exhibition, Janáček’s Sinfonietta, Prokofiev 5, Bartók’s Concerto for Orchestra (with an unfortunate re-write/cut in the Finale) and a fiery Don Juan that grabs you by the you-know-what from the first second and with proper attention given to the timpani salvo…

There are numerous never-bettered versions, of which four will suffice, such as Lieutenant Kijé and Háry János, Symphonia Domestica and, sticking with Strauss, his First Horn Concerto with Myron Bloom (out-manoeuvring even Brain, Civil and Tuckwell, and Mr Bloom is still alive at the time of writing this, aged ninety-two); and, another Cleveland section leader, Robert Marcellus, is mellifluous in Mozart’s Clarinet Concerto. Fruitful collaborations with distinguished soloists include Robert Casadesus (an elegant Mozart pianist), Leon Fleisher (Beethoven, Brahms, Grieg, Mozart, Rachmaninov, Schumann), Rudolf Serkin (Bartók, Brahms, Mozart), Isaac Stern (Mozart) and Francescatti (Mendelssohn) – as an aside I can’t immediately think of any other conductor who has recorded Brahms’s First Piano Concerto five times, there are three examples here, two with Serkin, the other with Fleisher, for Szell also documented it with Clifford Curzon, for Decca with the LSO, and there is also a pre-war version for HMV with Artur Schnabel and the London Philharmonic.

Music contemporary with Szell is not neglected; recorded examples include Samuel Barber’s Piano Concerto (John Browning) and William Schuman’s Song of Orpheus (with cellist Leonard Rose). Off the Sony record, so to speak, Szell’s premieres included Peter Mennin’s Seventh Symphony (which Jean Martinon would record in Chicago) and Dutilleux’s Métaboles, although the latter was available as part of an ‘in-house’ Cleveland Orchestra/Szell set that documented an also-live Missa solemnis, Mahler 9, and Sibelius 4 & 7. Szell’s considerable piano-playing is represented by Mozart, four Violin Sonatas with Rafael Druian and the two Piano Quartets with members of the Budapest String Quartet. On the lighter side, there are several Rossini Overtures (the chubby composer featured on the cover) and idiomatic Strauss Family selections (one could be listening to the Vienna Philharmonic) including a longer-than-usual Perpetuum mobile.

Szell preferred to record complete takes, as live, eschewing constructing a performance from edits, only effecting “little repairs” if needed. Sony’s re-mastering has preserved the sounds I was smitten with when collecting some of the above on LPs, many becoming yardstick accounts that remain issuing a challenge to others to get close. Oh, the stereo Haydn ‘Oxford’ Symphony (No.92) has been bewitching me for weeks (not heard it before), a reading that looks intensely inside the music and with a slow movement, properly Adagio (none of your period quickstep here), that gloriously raptures to a Parsifal-like vision.

I’d also like to mention John Mack, selected by Szell as principal oboe in 1965 (succeeding the reedier-sounding Marc Lifschey, appointed 1950), Mack an instrumentalist with a gorgeous timbre and the most-innate phrasing. Now late, Mack retired in 2001 having seen through the tenures of Maazel and Dohnányi. I have already cited Bloom and Marcellus, add to which Maurice Sharp, principal flute and a member of the Cleveland Orchestra for fifty years, while concertmaster Druian together with principal viola Abraham Skernick are heard in K364 and Skernick portrays Sancho Panza to Pierre Fournier’s Don Quixote.

It wasn’t just music with Szell – he was a splendid cook (dinner-guests testify), he prized automobiles (he’s photographed in 1946 as the proud owner of a new Buick having refused the Cleveland Board’s offer of a chauffeur-driven limo) and on his seventieth-birthday he expressed a wish “to play better golf.” Sample the affection Szell lavishes on the third movement of Dvořák’s Eighth Symphony, garnished with voluptuous-sounding strings, such sweet remembrance, or the pictorial freedom afforded ‘Vltava’ (from Smetana’s Má vlast) during which those adaptable strings magically and luminously conjure moonlight. Szell didn’t do one size fits all. He is one of the immortals; thank the lord for these proven and enduring recordings. Don’t miss; the occasional reservation does not preclude a five-star rating. Maybe Sony will now collect Ormandy’s CBS/RCA catalogue.