A box set of music is not just for Christmas (but makes a great gift), and the best is for Life. Rafael Kubelík continues this selection of multi-disc releases that will be added to The Classical Source periodically… 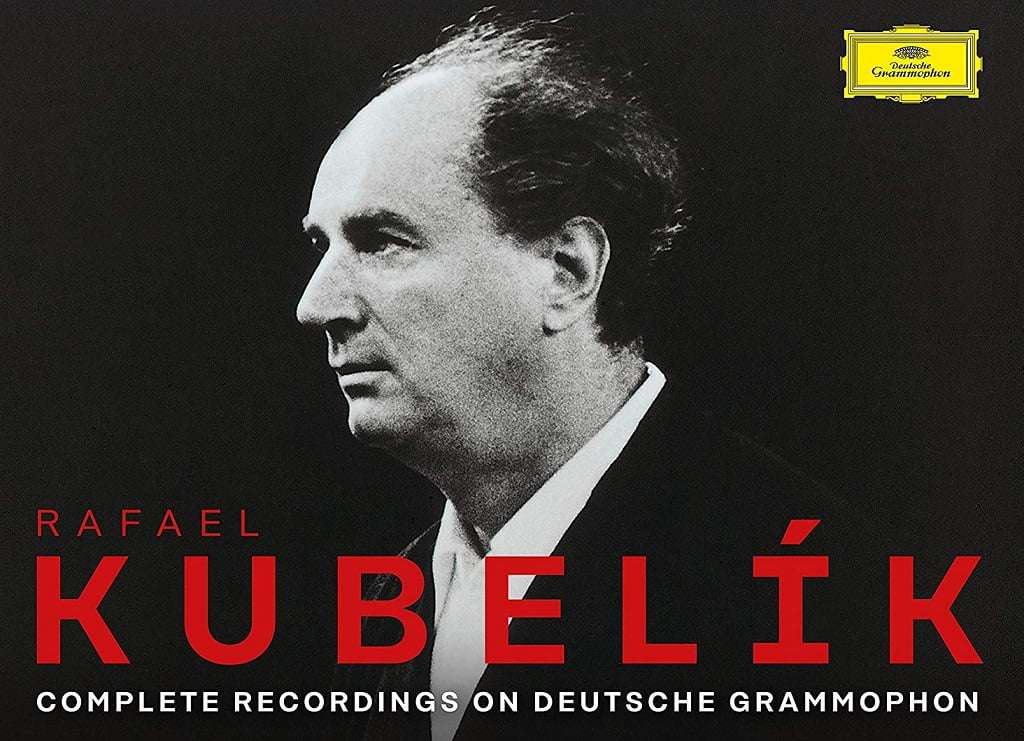 One of a conductor’s greatest strengths is surely the ability to persuade; after all, there is the maestro alone on the podium and in front is a large orchestra and full chorus waiting for a sign of what is wanted, a clear beat, a lucid word, and when things get going some sort of mediation on behalf of the composer and those many hours of study and reflection when a fully-formed interpretation has already lodged in the director’s mind, which may not be the one that the singers and players are returning…

How did Rafael Kubelík (1914-96) realise his musical visions? I ask the question because he obviously did, and did so to great-conductor status, which these Deutsche Grammophon recordings pay ample testimony to, yet he was recognised as among the “nicest and most considerate of men” (from Rob Cowan’s insightful booklet note), so presumably (I use that word as I never attended a Kubelík rehearsal, several LSO concerts, yes, each memorable) he was not given to bawling and rudeness but impressing those around him as being innately musical as well as genuinely amicable – the sort of man you want to do your best for.

Kubelík was born into music, his father Jan was a professional violinist, and as a teenager young Rafael enrolled at the Prague Conservatory to study violin, piano, composition and conducting – and in that latter role he debuted, aged nineteen, with his native Czech Philharmonic. From there he was appointed music director of Brno Opera in 1939, a short-lived tenure given the invading Nazis closed the company down, although the Czech Phil was left alone. Fast-forwarding to 1948, by which time he had helped start the Prague Spring Festival, Kubelík, engaged by Glyndebourne, defected to the West, to Britain, and he was soon in demand, firstly by the BBC to succeed Sir Adrian Boult at the Symphony Orchestra, a position Kubelík declined, but during the 1950s he did accept the music directorships of the Chicago SO and at The Royal Opera (Covent Garden), both ending after a few years and for unmusical reasons.

However a musical haven was on the horizon, in Munich, with the Bavarian Radio Symphony Orchestra, which Kubelík headed between 1961 and 1979, plus guest appearances either side, mercifully free from previous rancour, prejudice and office politics (including the bigoted Beecham objecting to foreign conductors at Covent Garden), and often getting to work in the studio for DG, and not just at Bavarian Radio, a gold-standard organisation in itself.

Kubelík was now occupied with the finest orchestras, something epitomised by the 1970s’ Beethoven Symphony Cycle included here, with a different ensemble per work – in number order, LSO, Amsterdam Concertgebouw, Berlin Phil, Israel Phil, Boston, Orchestre de Paris, Vienna Phil, Cleveland and BRSO, of which the standouts are Symphonies 1, 2, 4, 5 and 8, and there is an earlier No.7 in Munich that marries dignity and intensity to rewarding effect.

I tend to think of Kubelík as an even-handed musician, not given to extremes of tempo or temperament, but with no lack of conviction and values, as equally alive to musical small print as to the biggest gestures, the two, and those aspects betwixt and between, rounded as all-embracing; timpani-writing is usually crisply vivid and his customary use of antiphonal violins makes many an aural point, but those sections are surprisingly lumped together in Robert Schumann’s fresh-as-ever Four Symphonies, recorded in Berlin during the early-sixties (in first-class reproduction, too), of which the ‘Rhenish’ is notable, so too the Overture to Genoveva and the one that is part of the Incidental Music for Manfred. 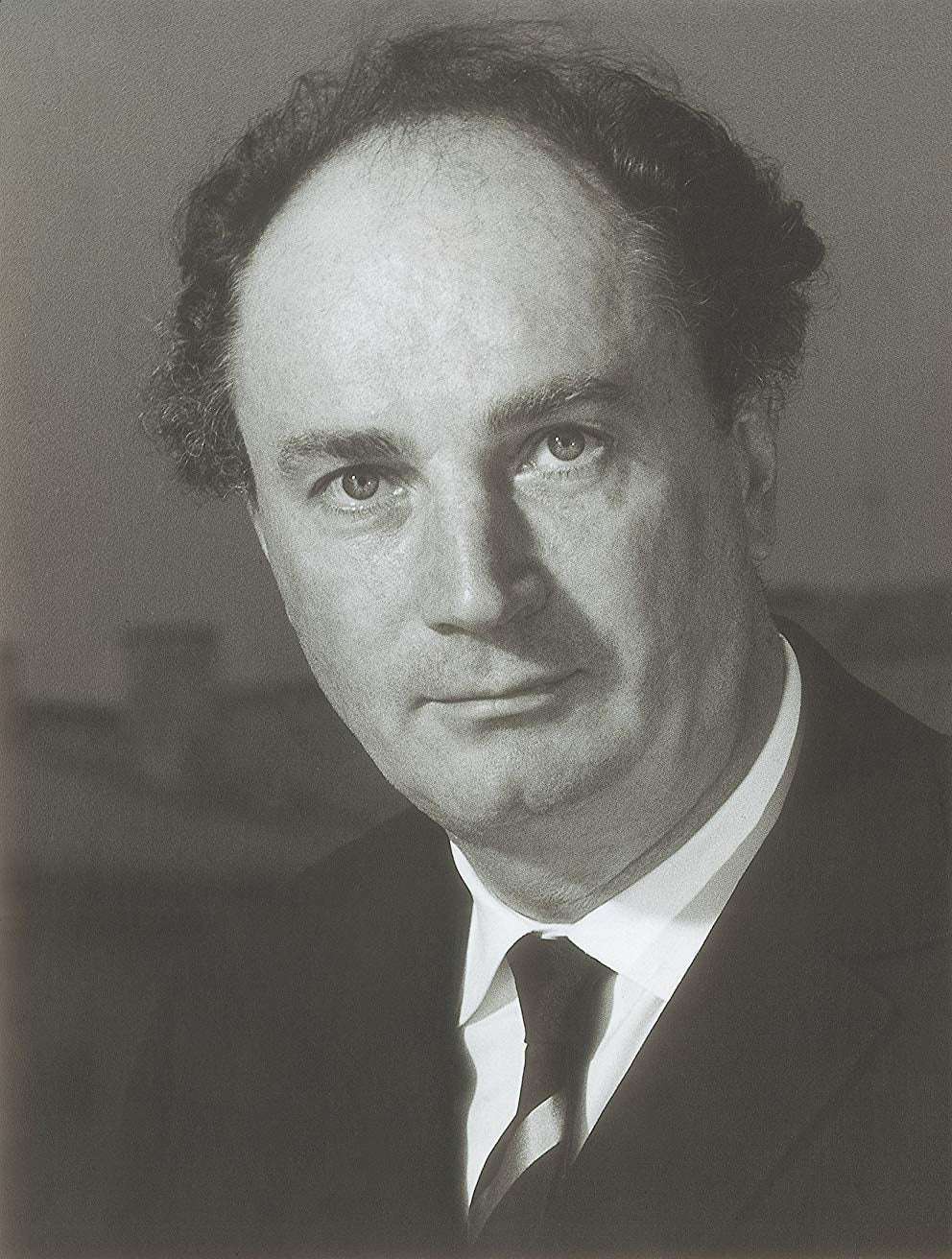 Kubelík is a wonderful conductor of Dvořák; here you will find all the Symphonies (Berlin, including my favourite Sixth), Overtures, Slavonic Dances, Tone Poems and the Stabat Mater (Munich), as well as the Ten Legends (each a jewel) and the Serenade for Strings (English Chamber Orchestra) – involving twelve of the sixty-four well-filled compact discs – Kubelík devoted to the Dvořákian cause and ever-sensitive to the music’s roots, the end result glows, life-enhancing in its heartfelt emotions, eloquent lyricism, pictorial qualities and rhythmic verve.

H is for Haydn, Hartmann and Handel, the former’s Mass in Time of War is profoundly sacred, the latter’s Water Music expressive and buoyant, and the Fourth & Eighth Symphonies of Karl Amadeus Hartmann (1905-63) find Kubelík not shying away from a challenge – the Berlin strings outstanding in the first work (music fertile enough for John McCabe to issue Variations on it) – or indeed from Schoenberg’s thorny Violin Concerto (Zvi Zeitlin) and his more-reachable masterpiece of a Piano Concerto (Alfred Brendel its ever-charismatic lifetime champion), both now nestling on disc forty-eight following the final part of Gurrelieder. Stravinsky’s Scherzo à la russe and his (elephant-related) Circus Polka now act as postscripts to Hartmann.

Other Concerto collaborations include Schumann’s for Piano, twice, with Géza Anda (coupled with Grieg) and with Wilhelm Kempff, whereas Clarinet Concertos by Mozart and Weber feature Karl Leister (a member of Karajan’s Berlin Phil at the time) in delightfully unhurried and subtly shaded versions, with plenty of opening drama in the Weber. More left-field are Piano Concertos 2 and 5 by Alexander Tcherepnin (1899-1977), with the composer as adept soloist, very engaging pieces – tuneful, colourful, expressive, with insouciance (Poulenc), sarcasm (Prokofiev) and suggestiveness in the mix. Also not every-day is Henryk Szeryng playing Berg’s Violin Concerto and the Second by the distinguished conductor Jean Martinon, his piece being intriguingly traditional yet without obvious influences, and there is also Margrit Weber’s coupling of Falla’s Nights in the Gardens of Spain (natives she and Kubelík may not have been, but music has a habit of transcending boundaries and preconceptions, and does so here to revealing effect, amigo) with Martinů’s kaleidoscopic Piano Concerto No.5.

Further Czech music is well-served in the persons of Janáček and Smetana, the former’s Sinfonietta, Taras Bulba and Glagolitic Mass, and the latter’s Má vlast (a regular in Kubelík’s discography, this one is from Boston) and Symphonic Poems, all top-end recommendations. There is also Mahler, Symphonies 1-9 (excluding Das Lied von der Erde) plus the opening Adagio from the left-unfinished Symphony 10; selfless interpretations best heard in 1, 4, 5 & 9, without gainsaying the others. The soprano in No.4 is Elsie Morison, Kubelík’s second wife, his first was killed in a car crash.

Given Kubelík’s operatic leanings (he also had a brief time with the Met in New York City), there are five stage-works here, two of which require more help than DG provides, not a syllable about, let alone librettos and translations for, Carl Orff’s Oedipus der Tyrann or Hans Pfitzner’s Palestrina. Outside of Cowan’s commentary, which is an overview of Kubelík’s life and work, there really needs to be some background to these rare settings, both of which are lengthy (each taking three CDs, the respective seconds difficult to extricate without potential damage to the disc or its housing) and wordy. I found the Orff (dating from the late-1950s, one Google entry describes it as a “drama with background music”), what I played of it, to be very uninteresting (although the composer is identifiable through some Carmina Burana DNA) whereas the three-hours-thirty Pfitzner is compelling, and what a cast – Ridderbusch, Weikl, Fischer-Dieskau, Prey, Gedda, Donath, Fassbaender – conducted as a labour of love by Kubelík, understandably so. But surely a synopsis for either piece could have been provided? As it is Palestrina is a wondrous musical experience. In less need of explanatory assistance are Verdi’s Rigoletto (DF-D, Bergonzi, Scotto, with La Scala forces) and Wagner’s Lohengrin (James King, also three CDs), although Weber’s Oberon (Grobe in the title role, with Auger, Nilsson, Domingo and Prey), once past the magical Overture, may require some research to unravel the German dialogue. An earlier Oberon intro is found on a separate Weber collection, there is a Wagner disc (including a rapt Siegfried Idyll), and Mendelssohn’s Midsummer Night’s Dream music is aired complete. 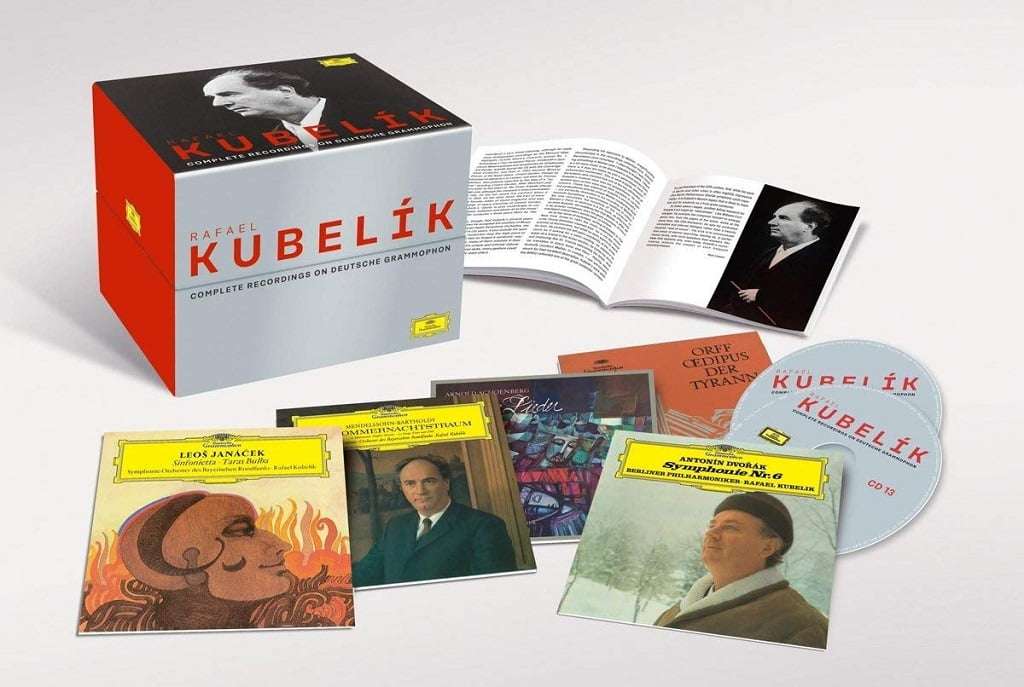 Excellent sound throughout, while the use of the LPs’ original artwork is an invaluable and attractive link to days of yore, and annotation is helpfully organised between discs’ contents (including recording dates and venues) and by composer. There are interviews with Kubelík (mostly in German) and DVDs of concert or for-camera performances (weird direction of the latter) – Symphonies by Mozart, Beethoven and Bruckner, together with a rehearsal for the last-named (Symphony 4, Vienna PO) in which Kubelík is gentlemanly if authoritative in explaining the music’s mechanics and in making interpretative requests, my above query now answered.

Kubelík also recorded for CBS/Sony, Decca, HMV, Mercury, Orfeo and Supraphon; so if this DG integral is not everything he did it does gather a substantial anthology of his considerable and considered artistry, something to be cherished, so too his own Quattro forme per archi (with the strings of the ECO), neoclassical Stravinsky meets passionate Martinů. The four-star marking takes into account the unhelpful way DG has presented the operas; so often the music-making itself is worth the full five, and, like Sony Classical’s George Szell box (link below), it will be a constant companion.