A box set of music is not just for Christmas (but makes a great gift), and the best is for Life. José Serebrier conducting Glazunov’s Symphonies & Concertos continues this selection of multi-disc releases that will be added to The Classical Source periodically… 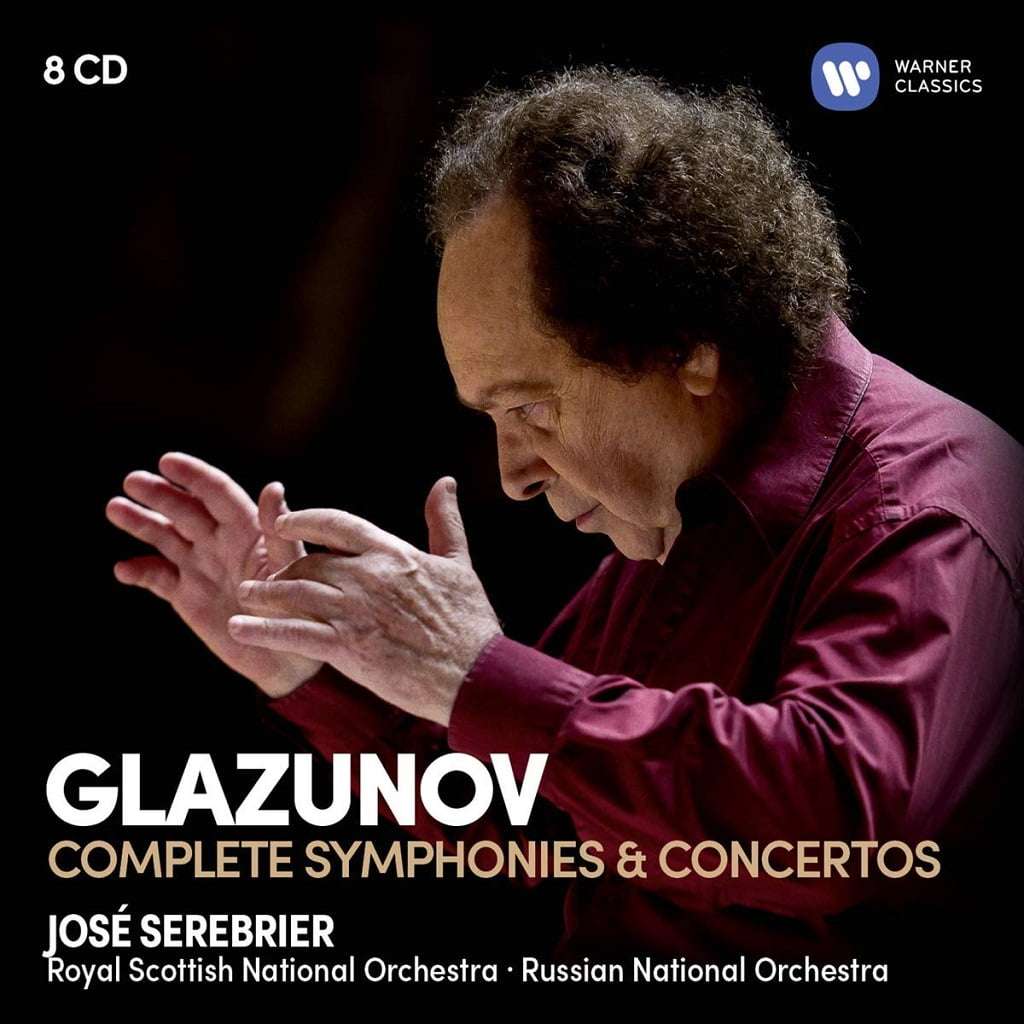 Whether composing in the Imperial or the Stalin eras of Russia (with his final few years spent in Paris), Alexander Glazunov (1865-1936) wrote impressive and inviting music that rewards attention, and has in José Serebrier a charismatic and committed champion who has no doubts as to its qualities. To quote the conductor: “a wealth of wonderful late-Romantic music … deep emotions that are contained and controlled, sophisticated and subtle … [and] a perfect compositional technique.”

There is no need to add to that. This generously filled budget-price box, boasting the releases’ original covers and the services of the Royal Scottish National Orchestra (Symphonies) and the Russian National Orchestra, opens of course with the First Symphony, a confident symphonic debut that arrives without boastful pomp and bursts with energy, folksy lyricism and balletic grace, with some exoticisms along the way, all very attractive and with a kinship at times to Borodin, by thirty years Glazunov’s senior. And if it is pomp you’re after, then the opening of Symphony 2 delivers, operatically (shades of Boris Godunov), heralding music that has a more distinctive individual flavour, Glazunov really into his stride now, and continued into Symphony 3 as he emphasises his lyrical charm and heroic strides, some low-brass scoring catches the ear, the Scherzo has fairy-tale written through it, and the expansive slow movement is deeply-felt; it’s marked Andante but Serebrier justifies his poetic Adagio treatment. Who could resist the opening of Symphony 4 with its soulful cor anglais melody, and the Scherzo is a winner, with much to relish elsewhere.

Of his eight Symphonies, the one most likely to make it to a concert is the Fifth – from its musing Andante introduction to the resolute Maestoso that rounds-off the fly-by Finale (Serebrier really driving the RSNO yet with no lack of detail or articulation, charged and thrilling, you have to imagine the audience’s cheers) there is a wealth of ideas and a structural conciseness that compels attention. By contrast with such life-enhancing panache, the opening of the Sixth is inconsolable and not especially relieved by the stormy Allegro appassionata that now enters; this is a Symphony with troubled emotions to share, bursting with fervour and dramatic variances. The Theme that fuels the next movement’s Variations is rarefied, and instead of a Scherzo there is a courtly and charming ‘Intermezzo’, whereas the multi-tempos of the Finale are a means of tying together the wide range of this striking Symphony. By way of further contrast, No.7 lives up to its ‘Pastoral’ nickname, a light airy confection not without sinew or direction, the listener invited to breathe fresh country air and admire the scenery, especially in the bucolic first movement, for things get a little darker in the slow movement, the sun now behind a cloud, but it’s all brightness and momentum for the Allegro giocoso Scherzo, and the Finale is bountiful. As for Glazunov’s final (completed) Symphony, by now he’d reached Opus 83, there is perhaps a mix of absolute assurance and a conscious farewell to the genre, about writing a masterly Symphony in E-flat that is all about music in absolute terms without denuding beauty and excitement, or feelings – the slow movement is marked Mesto (sad). However … Glazunov planned a Ninth, and what he left, a slow-fast-slow movement, is persuasively orchestrated by Gavriil Yudin.

Of the non-Symphony scores, if still with the very responsive and fired-up RSNO, if Debussy could write about The Sea, and Richard Strauss stage Salome, then Glazunov is in good company. The former opens tempestuously with growls and sprites, vivid orchestration (fabulous writing for harp), until more peaceful waters are described, picturesque vistas conjured. As for the Wilde incidental music, the ‘Introduction and Dance’ from Salome exudes theatrical contract, the latter number full of Eastern Promise. Then there is ballet music, a selection from the evening-long Raymonda – romance all the way (try ‘Valse fantastique’) – and that great score, The Seasons, a one-Act gem that from Winter to Autumn leaps of the page with the most descriptive, colourful and heartfelt innovations, so alluring; Serebrier and the RSNO do it proud with deft characterisation, an enjoyable alternative to my yardstick version, Svetlanov and the Philharmonia (also, now, Warner Classics).

As for the Concertos, may I direct you to my review – link below – of the two-disc release when it was new.

With a booklet note from the conductor, consistently superb sound (recorded 2004-11) and playing, this handy gathering of José Serebrier’s Glazunov makes for a marvellous set of nice, revealing and lifetime surprises.