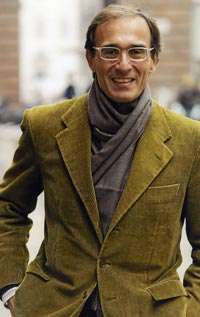 Evelino Pidò who was born in Turin is one of those conductors whose gifts enable them to impress equally in concert halls and in opera houses. He reckons that currently something like 70 percent of his work involves opera but adds that the ideal balance would probably be 50/50 or perhaps 60/40. Without being told, you sense immediately that in that adjusted balance of 60/40 the higher figure is the one that refers to opera. That’s because Evelino is a man of theatre as becomes evident when talking to him. Eventually he declares himself in these terms: “I have known concerts which produced a magnificent response from the audience but I have to recognise that opera is what I love. That’s because it means everything: you have a stage and to be able to create for it is marvellous. When doing that I’m always present from the first day to the last and I recognise that early on in my life when I was at La Scala my love for opera already existed.”

In referring to that period over twenty years ago, Evelino is recalling a time when his interest in music was centred on the bassoon. He came from a family noted for its painters yet they were fond of music too and many played the piano or some other instrument. Consequently Evelino’s very special gifts as a musical child were quickly recognised and he started to study music with his father. By the age of eleven he was at the Conservatory in Turin where his achievements on the bassoon won out over his other study, the piano. Indeed, at the age of seventeen he won a prize that took him to La Scala. He was the youngest musician there and soon began to organise chamber music. “That happened because I needed to transmit my enthusiasm and my passion for music. But the key development came when Maestro Abbado took an interest in me, sensing that I had a talent for conducting. It was he who introduced the idea of my going to the Academy of Music in Vienna where he had himself studied. For me that proved to be very important: not only did I have a great teacher there but I felt at the time that there was no better school for conducting.”

If one looks at Evelino Pidò’s CV one sees that a major step forward occurred in 1986 when he conducted Madama Butterfly in Melbourne. Geographically too that sounds like quite a jump but there’s an explanation that causes everything to slip neatly onto place. “It was Maestro Menotti with his concept of the Festival of Three Worlds. Having set up a festival in Spoleto and then twinned it with Charleston in the U.S.A. he was planning to create a third festival in Melbourne and he invited me to open it. That happened because a year or two earlier when I had made my debut with La traviata he had been present. I was unknown to him then, of course, but afterwards he came round to my dressing room and he said: ‘Maestro, you are a wonderful musician and conductor and you remind me of Thomas Schippers. Like him you breathe with the singers and you love music.’ No compliment could have pleased me more, and subsequently he invited me to dinner and that’s when he proposed that I should open the festival in Melbourne.”

In the years since then Evelino has become a noted figure on the international scene, being well known today in cities as far apart as Paris and Los Angeles. Indeed, it was his debut in LA that led to him being asked back immediately (“I love Mozart”, he says, mentioning that he conducted Le nozze di Figaro and Don Giovanni in that house as well as Donizetti’s Don Pasquale). A somewhat similar tale is unfolding now, since, with changes taking place in the opera house in Vienna, he looks forward to working there on productions over a four-year period from 2010. As for London, he first came to Covent Garden in the nineties and recalls with particular pleasure working here in 1995. “I conducted a new production of Così fan tutte with Armani costumes! It was a Jonathan Miller production with an astonishing cast: Roocroft, Susan Graham, Ann Murray as Despina, Thomas Allen, Keenlyside.” Such experiences are in his eyes quite vital to what he does. “There are many very good younger conductors around now, people who have developed a very good technique. But conducting is not just a matter of technique. What you have to strive for is to become a better musician, someone whose purpose is to make music and to make theatre. You need to understand theatre really well. Only then can you discuss matters with a director in depth. It’s that understanding which enables you to explain why you feel as you do and that can only come from the experience that work in an opera house eventually gives you.”

The one drawback of gaining so much experience in opera is that you can be regarded as an opera specialist. “It’s often the case with symphony orchestras that if you conduct a lot of opera they think that you are very good for that but not for them. To my mind that is a big mistake, just as I don’t want to be seen as limited in opera to Mozart and to Italian works simply because I have conducted such pieces so often. I love German music too, including for example pieces by Hindemith which I have conducted in the concert hall, and I would hope one day to conduct Wagner, perhaps Tristan. Fidelio is also a favourite and, because I studied in Vienna and know the right style for it very well, I have to say that Die Fledermaus is my dream. Fortunately opportunities can always open up as they did with another of my loves, the French repertoire. Now that I conduct a lot in Paris and Lyon I can do some of that. Not so long ago I did Chabrier’s Le Roi malgré lui – a wonderful score – and because it was such a success orchestras like the London Symphony began to realise that I might be good for that kind of music.”

These comments indicate the range of Evelino Pidò’s interests but his current return to Covent Garden sees him back in his most established field. He’s here to conduct the production by Moshe Leiser and Patrice Caurier of Rossini’s take on the Cinderella story as he did back in 2002. Indeed, apart from verismo works by Leoncavallo and Mascagni, which mean less to him, Evelino is delighted by Italian opera in general and loves La Cenerentola. “The comic operas of Rossini are performed all over the world, especially this one and The Barber of Seville. I’ve conducted both many times and they are both masterpieces but neither is easy since you are required to maintain such great concentration and focus. Of the two, I find Cenerentola the more complete achievement – it has a dramatic and theatrical arc to it and, like Donizetti’s Don Pasquale, it blends with the comedy an emotional quality, a sadness, not present in The Barber. The first time you hear ‘Una volta c’era’ in Act One Cenerentola herself is sad, she’s alone. She knows that the sisters are against her, indeed all the world seems to be against her. But later another light is shed on this music, the tempo and the spirit of it change and all of this brings out her character.” In describing Rossini’s Cinderella in this way, Evelino is, of course, making evident the fact that this version of the old fairy tale encompasses far more than our pantomime treatments of it attempt. It is, perhaps, not surprising that some commentators have compared this work with another opera that touches the heart amid elements of comedy: Mozart’s Le nozze di Figaro.

To conclude our discussion, I ask Evelino to expound on the way in which he as the conductor works with the directors Moshe and Patrice and with the singers, not least with Toby Spence who is cast as Don Ramiro, the prince, for the first time, and with Magdalena Kožená whose appearance in the title role marks not only her first time as Cenerentola but her Covent Garden debut. “With Moshe and Patrice, I have a very good relationship because we have worked together before and they are very musical. But what we do won’t be exactly the same this time because we all change as time passes. We shall, of course, discuss details and if, say, Moshe asks for a particular tempo he will explain why. When a reason is put forward like that and its validity is made clear, I would be stupid if I did not accept it. In any case I feel that this particular production is a very nice one: very good sets, very good costumes and, above all, the concept is good.

“As for the singers, when I start out, be it a new production or a revival, I immediately make contact with the singers so that, ahead of rehearsals with the piano, I can convey to them my musical conception of the piece. At that first meeting I give them detailed musical notes and then, on the second or third day, production notes are given with the director and myself both present. I’ll be there every time. Some conductors don’t do that, but for me it’s important because one must be supportive of the singers. Also it’s an opportunity to recognise anything that is no good and to work it out. So here at Covent Garden now it’s a step-by-step, day-by-day, process in which the directors in my presence explain to the artists what they are seeking. With singers like Magdalena and Toby the quality is there, but to debut in such well-known roles on a stage like this can be daunting and, however good they are, artists are fragile and need to be given confidence. In doing this work that I love, I always seek to create a good atmosphere. By that I don’t mean that I suggest that we should all have a drink together later – although that may happen. It’s essentially a question of presence, of being there, so that a sense of trust is built up. The key to success is co-operation and good feeling. I cross my fingers for this presentation of Cenerentola, but already I sense that the atmosphere is somehow different from that in 2002 and even better than it was then.”