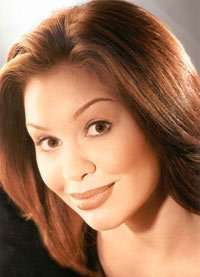 “I think of myself as curious – and I’ve always been like that.” These are the words of the mezzo-soprano Liora Grodnikaite who comes from Vilnius and the curiosity that she possesses has been an asset in shaping a career that took her first to America and then brought her to London. Even so her first involvement with music was in her own country. “When I was ten my parents took me to the Children’s Ensemble where youngsters were playing, singing and dancing. That compensated for the one year I had had learning the piano aged six: it was torture.”

Local training as a singer followed and it was during her time at the Lithuanian Music Academy in Vilnius that her curiosity came into play in a significant way. “I started to think about going to a summer music-class, but such ideas were not at all in fashion in Lithuania where you were expected to study with one teacher and stick with that. I felt that it wouldn’t hurt to see what was happening outside and an ex-teacher encouraged me to go to Salzburg for a masterclass being held there in the Mozarteum by a man known to her, Professor Richard Miller from Oberlin. He and I both realised that we wanted more out of it within the first half-hour of that class, and for two weeks after that we worked together in his studio. I knew immediately that Professor Miller was someone I could trust and out of it came my application to Oberlin College Conservatory of Music and my move to America.”

Once established there Liora sought out opportunities to be part of a series of Young Artists’ Programs moving on to Minnesota, St Louis and New Hampshire, but this required courage and determination. “Getting into the programs took a lot of work because the competition in America is far greater than anything I have found in Lithuania or in England. There was nothing unusual in having eight-hundred people audition for ten to fifteen places. Consequently it was normal for a young singer to line up as many as ten auditions in a month and just go on trying, again and again. The conservatories there have wonderful facilities and there are so many good teachers, but the five years or so after graduation can be quite painful even for really talented singers because there aren’t that many places for them to sing. When you do get work, it’s less to do with CVs and diplomas than having done your last job well enough to have some kind of reputation that earns the trust of those who may employ you. There’s so much pressure involved that nerves can take over and prevent you from doing your best. I try to learn from those singers with a more laid-back attitude than mine, but I think that I came from a society that encourages a self-critical mentality and sometimes it’s very hard to relax.”

In such a competitive field and working in the context of Young Artists’ Programs which invariably have a built-in termination date, it needs luck to keep going and not to have gaps in between, as Liora acknowledges. She sees luck too in the way that she came to Covent Garden. She quickly got a positive response from the House having opted to audition for its Young Artists Programme in preference to taking one for Houston Grand Opera, which, by chance, was scheduled for the same day and the same hour. “Of course the reputation of Covent Garden influenced that choice, but there was also the opportunity to be nearer to home and the fact that I knew that I liked London having previously visited from Lithuania as a tourist.”

As is usual, Liora’s period as a Young Artist at Covent Garden, which commenced in 2004, was set to last for two seasons, but in her case she had the unexpected pleasure of being asked to stay on for a third year as a Jette Parker Principal, an occasional position that became available for her throughout this 2006/7 season. We talk about what these years have meant to her. “I think it’s so important to be ready to learn from everyone in a House like this, and not only from singers. There are so many productions with different teams that you have a chance to learn from a new conductor and a new director for almost every role you study – and that’s so even if your role amounts to only a few lines. What’s more if I’m doing a supporting role like Mercédes, which I was singing in this January in the second cast for Carmen, you can at the same time discover so much about the title role: you see how it’s being directed and conducted. I decided that it would be a waste of time not to follow through, so instead of just listening I actually learnt the role on my own in a practice room and that meant that I was listening to it with completely different ears. By chance an audition came up to sing the role of Carmen for Latvian National Opera. That was just two months later and I got the part because I had come to know it so well having had the chance to see it developed from the very first day of rehearsal.”

The same degree of commitment has obviously gone into studying the role of Varvara in the current Covent Garden production of Janáček’s Kátya Kabanová, for which Liora is the cover. “I probably won’t sing it here but I have a contract to sing the role later, so I’m approaching it with a sense of anticipation knowing that I will be using what I’m learning.” (As it turned out Liora would play the role at Covent Garden – on 22 June due to the indisposition of Linda Tuvås.)

Liora Grodnikaite takes the role of the slave-girl Myrtale in two concert performances of Massenet’s “Thaïs” on 27 and 29 June. “Thaïs is an opera that has gone in and out of fashion but now seems to be making a comeback. Liora has already appeared in it, having taken the same role in a staged performance in St Louis in 2003. “It was one of the most beautiful productions I have ever been in. It was so colourful but at the same time so subtle: and that’s really how I hear Massenet’s music, which is so very French and capable of meaning so many different things to so many different people. It’s so lyrical but so dramatic too, and I think that it’s entirely appropriate that the piece is becoming popular again. I think that’s happening partly because despite being set in the Fourth Century AD in Egypt the subject is once again so contemporary. The three main figures, Thaïs herself, the monk Athanaël and the philosopher Nicias are all asking the big questions about the meaning of life in a context in which fanaticism and the desire to be beautiful and to be loved forever both play a part – and it’s all done to such gorgeous tunes.”

Significantly Massenet features again when in a guest appearance Liora joins in the Jette Parker Young Artists Summer Concert on July 21. The director David Gowland knowing of her enthusiasm for the role of Charlotte in Werther is incorporating part of Act Three in that programme. However, Liora is equally keen to be associated with contemporary music. She retains her links with her own country where several compositions have been written especially for her and where she was delighted to appear in The Little Prince, the only opera so far from the English composer Rachel Portman. Also, having appeared in the Linbury Studio Theatre in Dominique Le Gendre’s Bird of Night she much looks forward to the work that is even now being composed for her by Dominique.

But whatever the role and whatever the music, Liora’s concern is with a work’s deepest considerations. Inhabiting a character in depth may help her to get over her nerves but it has also become an essential aspect of how she now approaches an audition. “If you present an aria and treat it out of context, I don’t think you can be really convincing. To do that is to make it at best just a beautiful piece of music rather than something with a beginning and an end related to what it means in the opera.” It’s an attitude to her art which links the Liora of today with the child who at the age of eleven or twelve found her inspiration in what she observed in the auditorium while singing on a stage. “I could see people in the audience both laughing and crying and what inspired me rather than the example of any particular singer was the idea that somehow I can help them feel all that.”