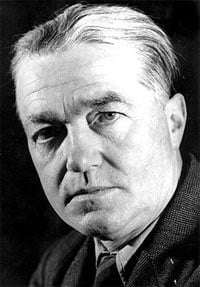 This symphony was completed early in 1937 and recived its first performance at a Royal Philharmonic Society concert at Queen’s Hall, London on 13th January 1938 under the conductorship of Leslie Heward.

It may be said to owe its inspiration to the natural surroundings in which it was planned and written. The greater part of the work was carried out among the mountains and seaboard of Co. Kerry, but the material of the second movement was conceived around the sand-dunes and marshes of East Norfolk. It is not “programme-music” – i.e. there is no story or sequence of events attached to it and, moreover, it adheres strictly to its form. It is scored for a moderate-sized orchestra (double wood-wind).

I Allegro. The Symphony opens without any preamble with the principal subject of the first movement, given out by the violins. In the fourth bar of this there is a figure of four semiquavers which subsequently plays an important part. Special notice may be taken of the downward leaps at the end of the theme. Presently there appears a fanfare-like motive on the horns, with which is combined the first subject fortissimo on strings. This very soon reaches a slight climax, ending with the downward leap. The music gradually quietens and slows down, a good deal being heard of the semiquaver figure, and we arrive in B major for the second subject. This is a long-drawn-out tune of lyrical character. It continues unbroken almost to the double bar, just previous to which part of the first subject is alluded to on solo violin and horn.

The development is ushered in by the semiquaver figure on a clarinet. The tempo becomes Allegro molto, the pace is set by a rhythmic figure on the strings, over which the semiquaver figure, now inverted, is treated at some length on the wood-wind, later in combination with the first subject in augmentation on bassoons and horns. There is a big climax leading to what amounts to the return and recapitulation. This is brief and quiet, the component parts of the first and second subjects and the horn fanfare being dovetailed in succession contrapuntally.

A lengthy coda concludes the movement, during which the rhythmic figure from the double bar assumes importance on the brass, and the inverted semi-quaver figure now augmented to crotchets is further developed by a solo horn over string accompaniment.

II Lento. The slow movement, which is in B minor, is based entirely on four motives which are given out at the start in quick succession. The first is an undulating one on cellos and basses, the second follows immediately on low flutes and bassoons, the third in canon on all four woodwind sections, and finally a three-bar motive on divided cellos. The foregoing material occupies the first seventeen bars. These four motives are subsequently developed and combined in various ways until the second of them gradually attains final supremacy in what may be described as a variation of it in the form of a broad twelve-bar melody, appearing unostentatiously first of all on cellos and basses against running thirds on the wood-wind. This is repeated on violas, cellos and horn, a climax is led up to by the fourth motive, in which the first is thundered out by brass and wood-wind in combination with the tail-end of the second on drums and brass instruments. The music quietens, and once more the broad melodic variation of the second motive comes back into its own, played by the upper strings with the first motive in the bass. The movement closes with a brief glimpse of the third motive on the clarinets.

III Vivace. The key is D major, the sunlight is let in, and there is a spring-like contrast to the wintry proceedings of the slow movement. The construction is so simple that detailed analysis would be superfluous. The main ingredients are the long oboe tune with which the movement commences, and the subsequent broader melody for strings with its appendage of a dancing or, more truly, jumping motive on wood-wind instruments. Eventually, a burst of sharp crescendo chords on the brass leads up to a sudden brief climax, after which the first oboe is left over and hangs on to recall a fragment of his original subject over mysterious murmurings on muted violas and ‘cellos, and the
movement comes to an end, -snuffed out”, as it were, by a passing cloud.

IV Lento molto The Finale is preceded by a slow introduction of twenty-four bars in which the downward leap from the beginning of the Symphony is much in evidence. The germ of the second subject of the Finale is heard on the horns and there is a serene and peaceful melody on the strings which provides complete contrast to the sudden wild mood of the ensuing Allegro molto.

Here the tempo becomes a quick three-in-a-bar, and violas give out the first subject proper, which is in the rhythm of a triple jig. This is worked up to a climax on all the strings, underneath which the trombones come in with a short passage of sharp rising chords of the sixth, at the close of which the downward leap appears for the last time. to be swept aside by the subsidiary first subject. This is a soaring motive on violins and violas treated canonically with its second half on ‘cellos, basses and tuba, which last mentioned instrument now makes its first appearance in the Symphony.

A rhythmic bridge passage makes way for a climax in which the jig-like first subject is heard in two forms of augmentation, first on horns against staccato chords and then further stretched out on trombones against rushing scales on the strings and wind. Another climax heralds the second subject, given out on oboes and bassoon over a monotonous pedal figure on drums, harp and basses. This alternates with a broad, march-like theme for strings and an attendant canon for horns and basses, but eventually tails off on violins and violas, the concluding harmonic progression forming the germ on which is built up a long, rushing string passage. Over this appears first the jig-like tune, then a persistent development of the subsidiary first subject, which now assumes ascendancy. Presently the second subject makes several tentative experiments and eventually, after what has been a combination of working out and return from preceding material, appears in its final recapitulatory position, now in seven-four time.

The tempo slackens and the coda or, more properly, the epilogue, takes place for forty bars, all of which, except the last two, are on the tonic pedal of G.

Here there is quiet retrospection of the march-like theme on the violas, introduced by its attendant canon on the upper wood-wind. The semiquaver figure from the first movement is recalled in its inverted form, a final crescendo leads to the conclusion, and the Symphony ends with a series of six crashing chords.