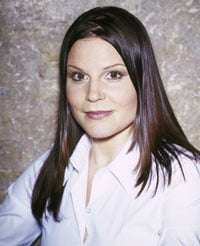 How apposite that Genia Kühmeier should have been born in Salzburg! Any singer would account himself or herself lucky to begin life in a place where music plays such a significant role, but in Genia’s case there’s even more to it than that. The nature of her voice is such that she is a soprano particularly suited to singing works by Salzburg’s most famous son. Indeed, when we meet it is at Covent Garden prior to the first night of Die Zauberflöte (The Magic Flute) in which she sings the role of Pamina and her debut at this house came last season in that earlier and much less well known Mozart opera La Finta Giardiniera. Furthermore, it was her success in winning first prize at Salzburg’s International Mozart Competition in 2002 that marked the start of a career that has become international.

Recalling that competition now, Genia states that entering for it was not really part of any plan. “It was an idea that came from my teacher, Marjana Lipovšek, who had heard that it was coming up. By that time I was studying in Vienna, so to do this was like a homecoming for me. Because of that and because it involved the Mozart repertoire I felt sure that I wanted to do it. Marjana Lipovšek was in fact one of two teachers I had then – both mezzos as it happens – the other being Margarita Lilova whose singing was mainly in opera and from whom I learnt about matters of technique. With Marjana Lipovšek my studies concentrated on details of interpretation, expression and dynamics, especially in the performance of songs. These teachers were so valuable to me that I still have coaching with both of them.”

Look back at what Genia has achieved in the last five or six years and you realise what an impression she has made in what are still her early days. Already she has worked with an array of famous conductors and she mentions in particular Nikolaus Harnoncourt, Franz Welser-Möst, Christian Thielemann and Daniel Harding. Even so pride of place goes to Riccardo Muti. “The voice which God gave me is very much the kind of voice that Muti favours. Consequently, when he has a work that he is intending to perform, there is often the possibility that he will think of offering something in it to me. In addition to concerts that I have done with him, there have been three operas. First came two at La Scala, Gluck’s Iphigénie en Aulide and Salieri’s L’Europa Riconosciuta and the third was my Salzburg Festival debut when we did Die Zauberflöte, the first of two occasions so far when we have worked on it together. This year sees my return to Salzburg to sing in The Creation at the Easter Festival – that’s with Simon Rattle and not having worked with him before I just can’t wait. What’s more, the music of Haydn is so wonderful: there’s so much colour in the way that he treats the text. It’s almost like painting a picture in sound and the music reaches out and touches you.” 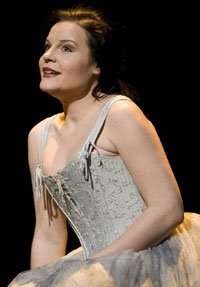 Despite the admiration that Genia expresses for Haydn, he is not one of the two composers she counts as her favourites. It’s no surprise to learn that one of those is Mozart. The role of Ilia in Idomeneo first done by her in a concert performance at Salzburg and then in a staging in Vienna a year later proved to be one of Genia’s great successes while Die Zauberflöte is probably the opera that has featured most prominently in her career. Her debut in the role of Pamina came in 2003 and since then she has appeared in it several times – not only with Muti in Salzburg but in Munich and Vienna and recently in New York where it marked her debut at the Metropolitan.

In one respect the roles of Ilia and Pamina notably differ. The former is a character in a drama where the role’s seriousness is in tune with the work as a whole. Die Zauberflöte, however, for all its darker elements and the trials through which its characters have to pass, offers a unique fantasy-world in which the engaging humour of Papageno is often the centre of the audience’s focus. To that extent Pamina’s role goes against the tone. Both of her Act Two arias express a death-wish brought about by the misguided yet understandable belief that Tamino does not love her. The challenge for the singer is to draw the audience into that more tragic mode and to make them surrender to it. But when I discuss this contrast with Genia it becomes obvious that the issue, albeit one that I am aware of as a member of the audience, does not exist for her in the same way as the artist playing Pamina.

“I do so believe in Pamina and in what she is going through that I simply want the audience to believe in what she is feeling. Her situation is so complex: there’s the special relationship with her mother, the Queen of the Night, the threat to her from the lascivious Monostatos and also the fact that the powerful Sarastro, who is at odds with her mother, increasingly comes to influence her life. What’s more, despite finding Tamino, she is the one person ignorant of what is going on and therefore unable to understand what is happening. It’s that which drives her to despair in trying to handle the situation. However, this does mean that the audience is completely with me, and at such times I feel not that I am playing Pamina but that I am her. Luckily for me the emotions of the part really suit me: that’s to say that I am not going against my own personality but creating something very close to myself. Indeed, what is in Pamina I can recognise as somehow also being within myself. And much of that applies to the role of Ilia too. If I had lived in Mozart’s days, I would have felt that he must have written these roles specifically for me. I don’t mean that arrogantly – it’s simply that they fit me so well.”

When it comes to interpretation of these roles, variations come from one production to another. Genia welcomes the opportunities this provides to pick up on the energy of the singers with whom she is appearing although she sometimes finds that directors can have ideas that are not wholly persuasive. Because Tamino and Pamina only meet towards the close of Act One of Die Zauberflöte (although Tamino is already in love having seen a portrait of her), it follows that Pamina’s duets in the first act cannot be with Tamino and they take place instead with Papageno. The bond established between these two is born of their similarity of outlook including the fact that a quest for love is common ground. “One director I worked with took a different view, however. He suggested that the connection between them should be interpreted as meaning that they actually fall for each other. I don’t accept that notion. I believe that they simply become good friends who wish to help each other in Sarastro’s world.”

Genia’s other favourite composer is Richard Strauss. She has already taken roles in several of his operas and looks forward to the possibility of eventually taking major parts such as that of the Marschallin in Der Rosenkavalier. She embraces his songs and a selection of them will be included in her Wigmore Hall recital on 19 April when she appears there with pianist Roger Vignoles in a programme of Mozart (naturally enough), Schubert and Dvořák. She nominates Brahms, Schumann and Rachmaninov as being suited to her voice. Meanwhile a cherished dream is to feature works by several Czech composers whose music deserves to be better known. Her opera-calendar is fixed for some time ahead and beyond that she is anxious not name roles she would like to play, save for those Strauss parts: “I have my dreams, not least in the Italian repertoire, but I don’t want to be specific since it all depends on how my voice develops.”

As I look back on the half-hour that we have spent together, I am aware that Genia has been friendly, concerned and a bit anxious. Her worry had been that her English would not be good enough but, if the occasional word has eluded her, she has had no trouble in expressing herself or in giving me a clear picture of herself as a youngster coming from a musical family. Her parents both became piano teachers and had hoped that their daughter would make a career as a pianist. At sixteen, however, Genia heard a tape of her mother who had herself studied singing at the Mozarteum in Salzburg. Listening to that beautiful voice helped her to decide to take the route that her mother had not followed. “Consequently my career means something special to my mother and she’s happy that it has already taken me to so many important opera houses.” While audiences around the world will undoubtedly share the pleasure that Genia’s parents are experiencing in their daughter’s achievements, there is another individual to be mentioned too. As I leave her, Genia requests details of the website on which this article will appear. She asks so that she can tell her husband – she knows that he will be eager to read it.