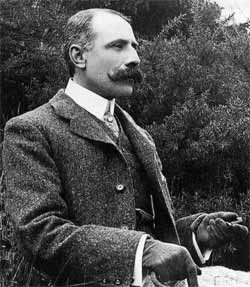 At a preview of this film (2010), shown on 26 October in a London hotel, John Bridcut spoke of the deep impression that Ken Russell’s 1962 documentary on Elgar had made upon the musical world, and recalled how it had revived interest in the composer. (Russell’s film is on DVD.) It must immediately be declared that Bridcut’s own documentary is more than a worthy successor to Russell’s: it is a stunning example of the genre, made with self-evident affection for, and insight into, its subject. It is also superbly accomplished from a technical point of view, and altogether revelatory as to Elgar the man and his music. An enormous advantage is that Bridcut’s film is graced by many authoritative ‘talking heads’, whose insights serve to enrich the narrative at every turn.

Near the beginning of the film we see Elgar rehearsing the first of his Pomp and Circumstance Marches, music that would later – to the composer’s great chagrin – be inextricably linked to the words of “Land of Hope and Glory”. Mark Elder describes the tune as “sad”, and David Owen Norris observes that Elgar had this way of melding the heartbreaking and the happy, often by the use of “drooping sixths”. But, brilliant pieces though the Marches are, they merely “ring at the door” of the “real” Elgar.

Both Elder and Anthony Payne remark that whilst irony is regarded as an important facet of Mahler’s music, it is equally significant in Elgar’s. The pervasiveness of melancholy is stressed, something that arises out of an “ambivalence in his character” … “he knew how complicated he was”, as one commentator puts it. In discussing the song ‘Deep in my Soul’ (the second of Four Choral Songs, Opus 53, to a text by Byron) Elder talks of Elgar’s “trembling heart” and his “nervous disposition”, a premise continued by Colin Davis, who speaks of the “intense privacy” of Elgar’s music, in which “ambiguity” is a notable feature.

The importance of Elgar’s meeting with Alice Roberts is stressed, as is the fact that she immediately decided that her future husband was a genius. But, we soon learn, “Edward was essentially a lazy man … easily diverted”: it would be Alice who kept him working. Payne, after talking of Elgar’s “man-size chip”, later hazards that if Elgar hadn’t been a composer he would probably have had a breakdown … composition was his therapy.

On the soundtrack are extracts from many of Elgar’s works, performed by chorus and/or orchestra and fascinatingly discussed in the course of the film’s 90 minutes. Edward Gardner finds the sound of the shofar in The Kingdom quite startling, likewise the Mid-Eastern effects that Elgar’s orchestration achieves – to “visceral” effect. And, with a sense of wry, rather infectious, amusement, David Owen Norris discusses the song Is she not passing fair?. He notes how the word ‘passing’ is treated, as if hesitant to reveal just how “fair” the lady in question is. Surely, the pianist observes, this could be the best question mark in all music! As for the Symphonic Study, Falstaff, Owen Norris suggests that Elgar himself is the figure of the fat knight, and he proceeds to play on the piano “big boasting intervals” from the work. Another remarkable observation, underlining the composer’s reticent nature, was that “the more disguises [Elgar] donned in his music, the better his music became.”

After Elgar scholar Paul Harper-Scott’s introduction to Enigma Variations, a piece that Anthony Payne thinks well-nigh-perfect, the Venezuelan conductor Natalia Luis-Bassa tells how sublimely moving ‘Nimrod’ is to her – almost, but not quite, moving her to tears. And for Colin Davis, ‘Nimrod’ is “noble, generous, grand, without too much pageantry”. Elgar “thought in tunes” (David Owen Norris), so composing a symphony must have presented quite a challenge. The First of them (“the only one in A flat in the repertory” – not the case, as it turns out, for there are the Souls Symphony of 1999 by Charles Osborne and one by Johann Baptist Vanhal, 1739-1813) starts with remarkable use of the note A flat, in both the tune and in the bass. Mark Elder describes the first movement as “thrilling, muscular, passion … not bombastic”. Elder also comments on the stormy nature of the orchestral introduction to the Violin Concerto.

As to Elgar’s character, Elder thinks him not to have been an entirely lovable character, “gauche and offensive”, in fact. “Very self aware”, says David Owen Norris, even to the extent of organising a death-bed photo to be taken of himself while he was still alive! And, rather pithily, Jerrold Northrop Moore suggests that he was “a bit flash”.

Whilst Colin Davis pays tribute to Elgar’s “finesse” in juggling his loyalty to his wife with all his other affections, Michael Kennedy points out how Elgar’s letters to Alice Stuart-Wortley are gentler, softer, and more sensual (he always addresses her as “Dear Windflower”) than those he wrote to his wife (“Dear Alice”). The copious letters Elgar received from the younger woman do not survive (unlike letters he received from many of his other friends.). On this point, Kennedy comments enigmatically: “Interesting”. And of a 1926 letter written by the composer to Stuart-Wortley (the dried windflower enclosure still extant), part of the last sheet has been cut out (probably by her family for being too intimate for the eyes of posterity). Also amazing to learn that Elgar pursued AS-W to Tintagel, where she was a frequent visitor. Elgar’s behavior seems to have been obsessive. We hear that by now “his wife had ceased to inspire him … she was more like his CEO”. We are told that the Second Symphony was “inspired by Alice Stuart-Wortley”. To his dear Windflower Elgar wrote: “I have written last year into the first movement.”

Mark Elder comments on this “naturally great symphonist’s lust for life”. But, great hill-walker that Elgar was, traversing Hampstead Heath in 1912 “he was restless … something that is especially evident in the opening of The Music Makers, “a vision of his neuroses”. “Beautiful music”, says Edward Gardner, but with “an emotional underbelly”. That opening, says Elder, is “like time-travel to a world of dreams”. And what does Elgar write about the piece to Alice Stuart-Wortley? “I think of YOU in the music”.

For “a haunting self-portrait” in music, Gardner looks to Sospiri, “naked passion … very un-English”. Later, we are told, Elgar almost disowned the piece: “the shame of self-revelation”, perhaps? And on a draft of the piece Elgar wrote: “Absence”.

A highly insightful and extended section of the film is devoted to “The Apostles”, wherein, Gardner believes, Elgar – “always the outsider” – identified most of all with Judas Iscariot, the outcast against the establishment, who wrestles with his despair and with impending suicide. Apropos of that, we learn how Alice Elgar asked visiting friends to take care, telling them that Edward often talks of suicide. Judas’s gloom in The Apostles, states Payne, is born of Elgar’s own experience, and the high viola line at ‘My end is come’ is pointed to for its “intensely poignant” quality. And there is the not insignificant fact that Elgar devotes fifteen minutes or so to Judas’s inner feelings, but very little time to the crucifixion.

Alice, too, suffers. She writes a heartfelt poem on the subject of betrayal and “the bitter strife” that flows from being so maltreated. Her friend Rosa Burley seems to have been only too aware of Alice’s grief at being betrayed by Edward. Another fascinating segment of the film deals with a haunting song, Owls – and Epitaph, which bleakly confronts “nothingness”. Such music from Elgar? Mark Elder almost feels he is the victim of a practical joke, so incredulous is he that such advanced writing, thirty or so years ahead of its time, flowed from Elgar’s pen.

After Alice Elgar’s death, a new muse appears on the scene: Vera Hockman, whom Elgar encountered when she played in the back desk of the violins at a performance of The Dream of Gerontius. Now, declares Payne, Elgar “was a goner!”. Vera’s daughter shows us photographs of her mother and tells how in 1931 Elgar took Vera out on the town and how he ordered two Manhattan cocktails for them. We cannot doubt, from the tangible evidence, that emotions ran high, Elgar even addressing Vera as “My mother, child, lover, friend”. Payne points out how Elgar, now nearing the end of his days and sketching the Third Symphony, writes on one of these sketches: “Vera’s own tune”. His energy at this time was owed to Hockman, Payne adds, and if he had lived another six months he would have completed the work.

Most remarkable of all, several months after Elgar died, Vera wrote a long letter to him. So replete are its pages with expressions of love, affection, and understanding, that a great many questions are inevitably raised. Michael Kennedy mutters: “the biographies will have to be rewritten.”

All in all this is a wonderful documentary. It is beautifully shot and directed, and it deepens our understanding of a composer whose significance Ken Russell re-alerted us to back in the Sixties. At the end of Bridcut’s film he pays a nice hommage to his predecessor, with an image of Elgar, atop a white pony, ascending a Worcestershire hillside.