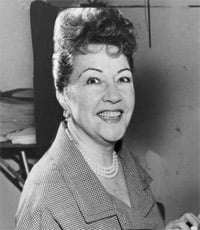 16 January 2008 would have seen the hundredth birthday of Ethel Merman. Sadly, the great lady of American show-business died a quarter of a century ago at age 76. One of her last appearances was in the comedy film “Airplane!” playing an old soldier who thinks he‘s Ethel Merman belting out ‘Everything’s coming up roses’.

Something of a Broadway legend, in her own lifetime, Merman made her theatrical debut in Gershwin’s “Girl Crazy” in 1930 and went on to star in five Cole Porter shows including “Panama Hattie” and “Anything Goes”. She introduced more of Porter’s songs than any other performer and Irving Berlin wrote “Annie Get Your Gun” and “Call Me Madam” for her. Her greatest performance was as Madam Rose in the Jule Styne-Stephen Sondheim musical “Gypsy”, based on the life of Gypsy Rose Lee’s mother. She even took over in “Hello, Dolly!” (which Jerry Herman had originally written for her) and stayed with it till it closed, because Merman never quit a show before the final curtain.

There has rarely been a singer like Merman and there will never be another. She really was a total original with a powerhouse voice that seldom needed a microphone. In her day she was the best there was. When they ask what place does Irving Berlin have in American music, the famous answer is usually: “Irving Berlin has no place in American music, Irving Berlin is American music”. Well, what place did Ethel Merman have in Broadway musical history? Ethel Merman is Broadway musical history and, since her passing, it just hasn’t been the same.

On Sunday, 20 January, Jermyn Street Theatre in London is paying tribute to Merman in a one-man show by Dominic Mattos. Yes, one man, all of 23, who belts out the Merman hits such as ‘Some people’, ‘You’re the top’ and ‘I get a kick out of you’ and even numbers she didn’t have hits with such as ‘Diamonds are a girl’s best friend’ and ‘I will survive’ – never one to hold back, Ethel recorded an LP in the 1970s called “The Ethel Merman Disco Album”. Her up-tempo, beat version of Cole Porter’s ‘Something for the boys’ is something else, while Dominic Mattos as Merman is something else again. 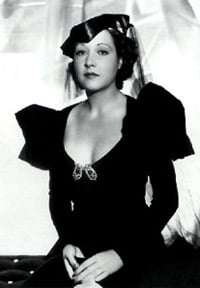 Ethel Merman was born Ethel Agnes Zimmermann in New York to an accountant father and a schoolteacher mother, a family mixture of Lutheran and Presbyterian, while Ethel was baptised Episcopalian. She began her working life as a stenographer but seems to have sung from an early age – would anybody have stopped her? – and was immediately fascinated by Broadway. She sang popular songs of the day while her father played the piano. She always had a powerful mezzo-soprano/alto voice with perfect pitch and enunciation at a time (the 1920s) when many female – and male – voices were thin and reedy. Ethel could always belt with the best.

At that time theatre performers did not use microphones but projected the voice, which stood her in good stead in show-business. Her voice was a natural, untrained talent. When she appeared in her first Broadway show, George Gershwin told Ethel that under no circumstances should she take singing lessons – she was a natural singer and an intuitive actress. Subtle she never was, she left that to the pale soubrettes of Broadway. She had a personality as big as all-outdoors and she always spoke her mind – loudly. When co-star Jack Klugman (“Quincy”) missed his cue in “Gypsy” she bellowed “Mr Klugman on stage, if you please!” And, when a director complained that the number being performed by the chorus needed more balls, she yelled “Props!” And she wasn’t above throwing people out of the audience if they were a nuisance. Even in mid-song she was known to haul out noisy offenders onto the street. In cabaret she refused to let waiters serve while she sang. “Nobody eats while I’m on!” was her answer to that one. 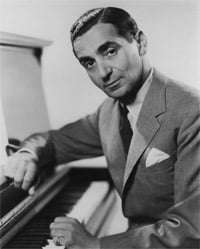 While Merman had great songwriters like Porter and Gershwin writing for her, there was no shortage of shows for her to appear in. Irving Berlin was another source of material that Ethel used to great advantage in “Annie get your gun” (1946) and “Call me madam” (1950), shows written specifically for her, and from which came her signature anthems, ‘There’s no business like show business’ and ‘You’re just in love’.


Good shows begun to dry up in the late 1950s until Jule Styne and Stephen Sondheim came up with “Gypsy” in 1959. In fact, both Irving Berlin and Cole Porter turned down “Gypsy”, and Ethel turned down Sondheim as a composer. By then he had only written the lyrics for “West Side Story”, and Merman wouldn’t trust an untried composer. However, Jule Styne provided a brilliant score (probably his best) and Sondheim’s lyrics were a real cut above anything that had gone before in a Broadway musical – a natural, albeit poetic, conversational tone. There’s not a dud number in the show and with the likes of ‘Everything’s coming up roses’, ‘Let me entertain you’, ‘Some people’, ‘Small world’, ‘You’ll never get away from me’, and many more, it proved to be a reasonably long-runner with over 700 performances.

However, the same season saw the opening of a little thing from Rodgers & Hammerstein called “The Sound of Music” which ran for more than twice that number of performances and won a Tony Award for Mary Martin. Ethel’s attitude at being Tony-nominated but pipped at the post by Martin as Sister Maria was: “How can you buck a nun?”

Madam Rose in “Gypsy” was a great triumph for Merman, the performance of her life. It was a pity she could never bring the show to London, and we had to wait 25 years before we saw “Gypsy” in London with Angela Lansbury and subsequently Dolores Gray, but even then it was not a great commercial success.

After a revival of “Annie get your gun” (1966) and “Hello, Dolly!” (1970) Ethel Merman retired from the stage. She had also made movies from 1930, including “Anything Goes” and “Call me madam” but not “Annie get your gun” and nor the movie version of “Gypsy”, which went to Rosalind Russell whose husband had acquired the film rights. But Ethel graced other films such as “Kid Millions” (1934), “Alexander’s Ragtime Band” (1938), “There’s no business like show business” (1954) and “It’s a mad mad mad mad world” (1963) and also did a lot of television shows, concert work and recordings.

She was married and divorced four times to a theatrical agent, a newspaper executive, an airline executive and the actor Ernest Borgnine. This last relationship lasted just 32 days: in her autobiography, for that period of her life, Ethel left a blank page. When she died in 1984 Merman was remembered on Broadway when all the theatre marquees dimmed their lights in fitting tribute to America’s first lady of the musical stage. She was known as ‘Miss Birdseye’ in the profession because, once she had learned a show, it was fixed and no changes could be made. She would say: “This show is frozen” and would give, as the professional she always was, the same performance every night.

When I saw her rehearsing for one of the Royal Variety Performances, she was becoming tetchy with the sluggishness of the orchestra’s playing. Perhaps referring to herself, she announced, “These arrangements are as old as Methuselah…”. There really will never be another Ethel Merman.