My first appraisal of the Meloclassic label is an enlightening and encouraging one. This batch from a considerable catalogue concentrates on pianists, some well-known, some less so, some obscure. The recordings are taken from concerts or are studio sessions intended for broadcast, the tapes sourced from the respective radio stations. The sound is variable but never less than good and has been judiciously re-mastered by Lynn Ludwig with a keen ear for tonal fidelity; in other words, there is none of the aural detritus that over-processing brings; hiss remains and the instruments and the music are all the better for it. Everything that is issued here are first compact disc releases and taken from the masters. Annotation focuses on the artists, is anecdotal by nature, and very readable. 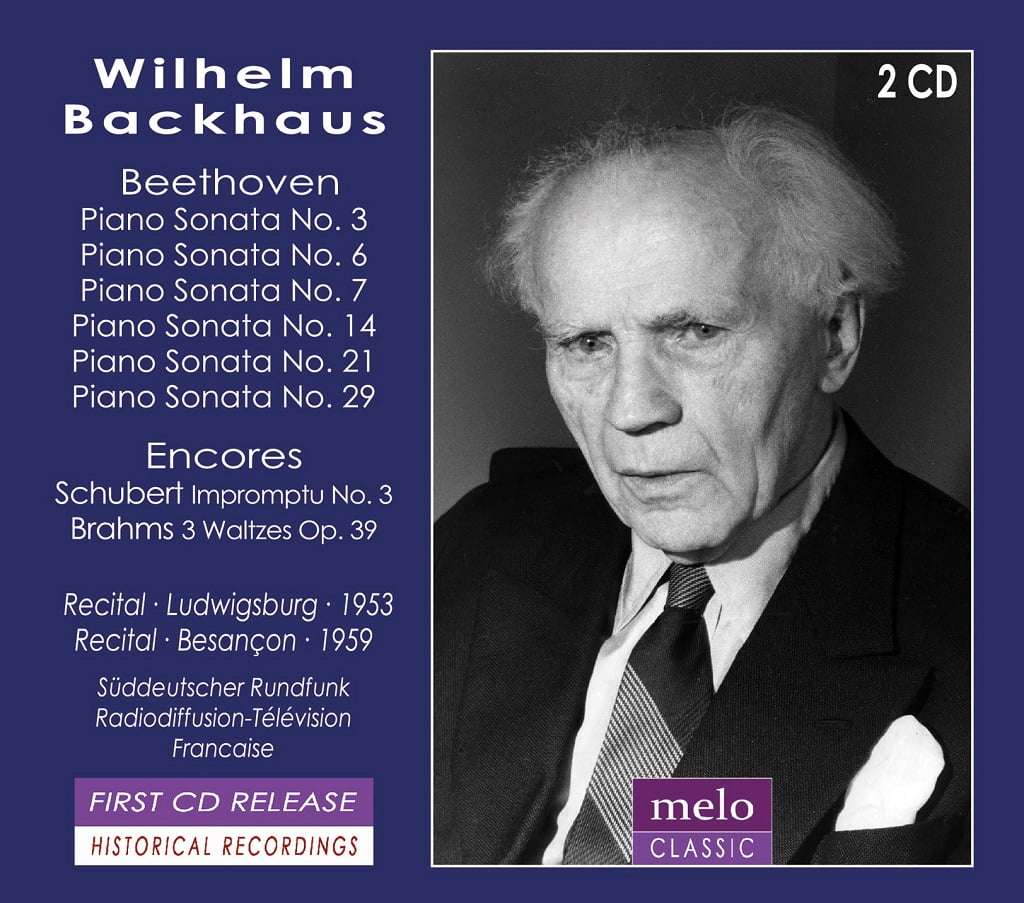 Wilhelm Backhaus (1884-1969) is heard in one of his signature composers, Beethoven, a quantity of Sonatas, six from the 32 recorded in 1953 and 1959. All impress. This is serious and noble playing, and also brilliant when required, such as in an example from Opus 2 (the C-major) and two from Opus 10 (the Second and the Third), and also included are the ‘Moonlight’, ‘Waldstein’ and ‘Hammerklavier’ Sonatas, although the informative presentation doesn’t acknowledge nicknames. Backhaus’s playing is full of character, excitement and solemnity, although the ‘Hammerklavier’ may just be found wanting in terms of drama and drive in the first movement, heroic though it is in its own way. Don’t expect too many exposition repeats, although the ‘Hammerklavier’ is a surprising exception. Short pieces by Brahms (three Waltzes from Opus 39) and Schubert (the B-flat Impromptu from D935) complete a recommendable release. [Meloclassic MC 1030 (2 CDs); 2 hours 26 minutes; 4****] 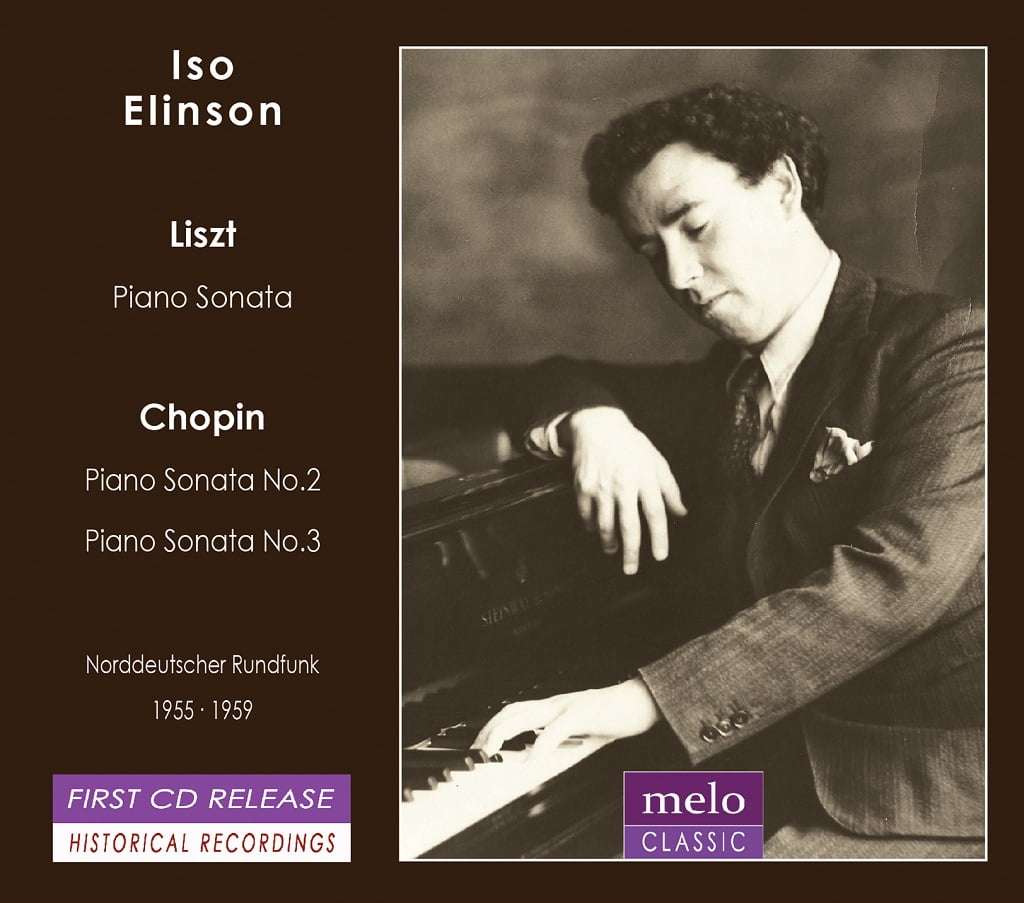 The release devoted to the Russian Isaac ‘Iso’ Elinson (1907-64), who studied at the St Petersburg Conservatory with Felix Blumenfeld (Horowitz’s teacher), is of less appeal. Captured in performances from 1955 and 1959, Elinson is heard in three great Sonatas, Liszt’s B-minor and Chopin’s B-flat and B-minor. Unfortunately, to my ears, his accounts are small-scale and literal, with a tendency to rush and appear technically awkward. The recorded sound is very agreeable throughout, however. [MC 1036; 75 minutes; 2**] 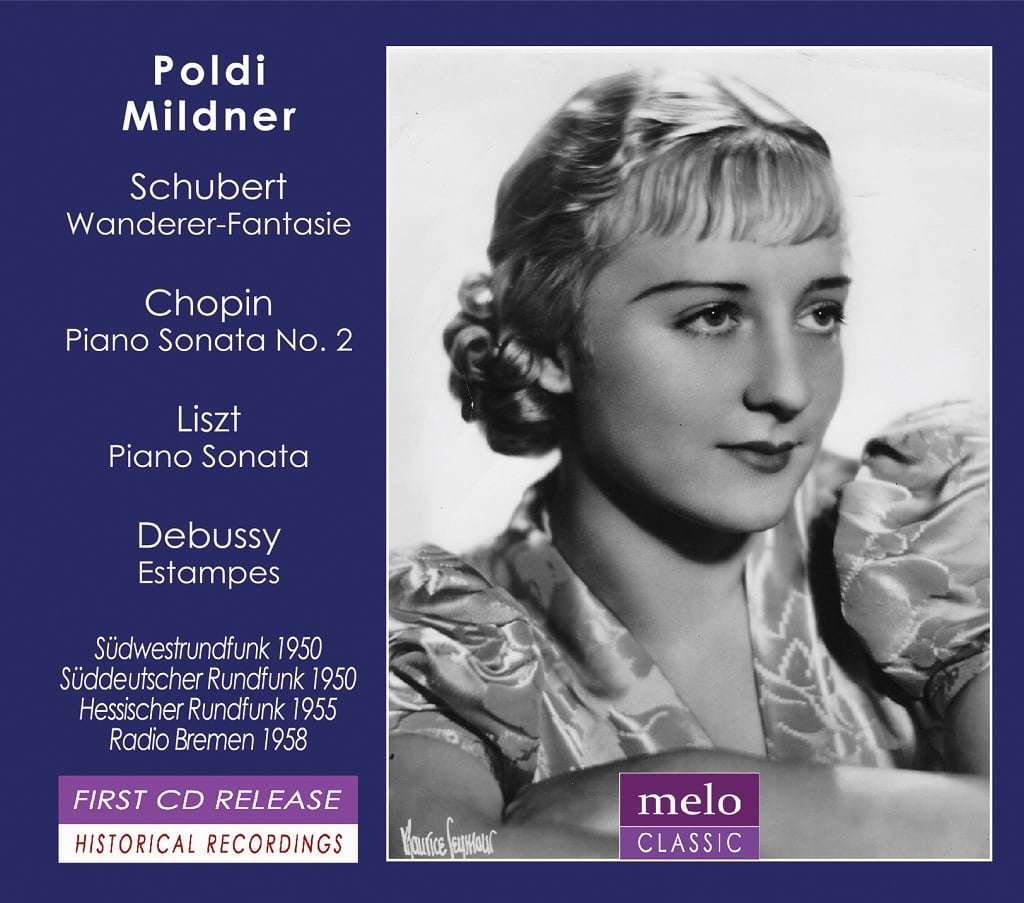 Chopin’s B-flat and Liszt’s B-minor Sonatas are also to be found on Poldi Mildner’s disc. The Austrian pianist Leopoldine ‘Poldi’ Josefine Mildner (1913-2007) made very few recordings, and those shared by Meloclassic are radio tapes from the 1950s. Her Liszt is engrossing, encompassing a real sense of involvement. She’s spontaneous, too, adding a sense of adventure, although there are moments of threatened insecurity, but dynamic concerns and a deep involvement with the music see her through, so too in the Chopin and also Schubert’s ‘Wanderer’ Fantasy. One might seek greater character in her playing, but the mix of fire and sensitivity is appealing, and a considered rendition of Debussy’s Estampes closes the recital. Mildner’s early years as a prodigy were successful – she made her debut aged fourteen in Vienna with a solo programme and soon after played Tchaikovsky No.1 with the Vienna Symphony Orchestra – but was less flourishing later (and included a period of Nazi stigma), although she played at Carnegie Hall in 1947. Later Mildner taught at the Salzburg Mozarteum and she also lectured; earlier in life the Mildner family had settled in Buenos Aires, and that’s where Poldi returned to see out her remaining years. [MC 1022; 78 minutes; 3***] 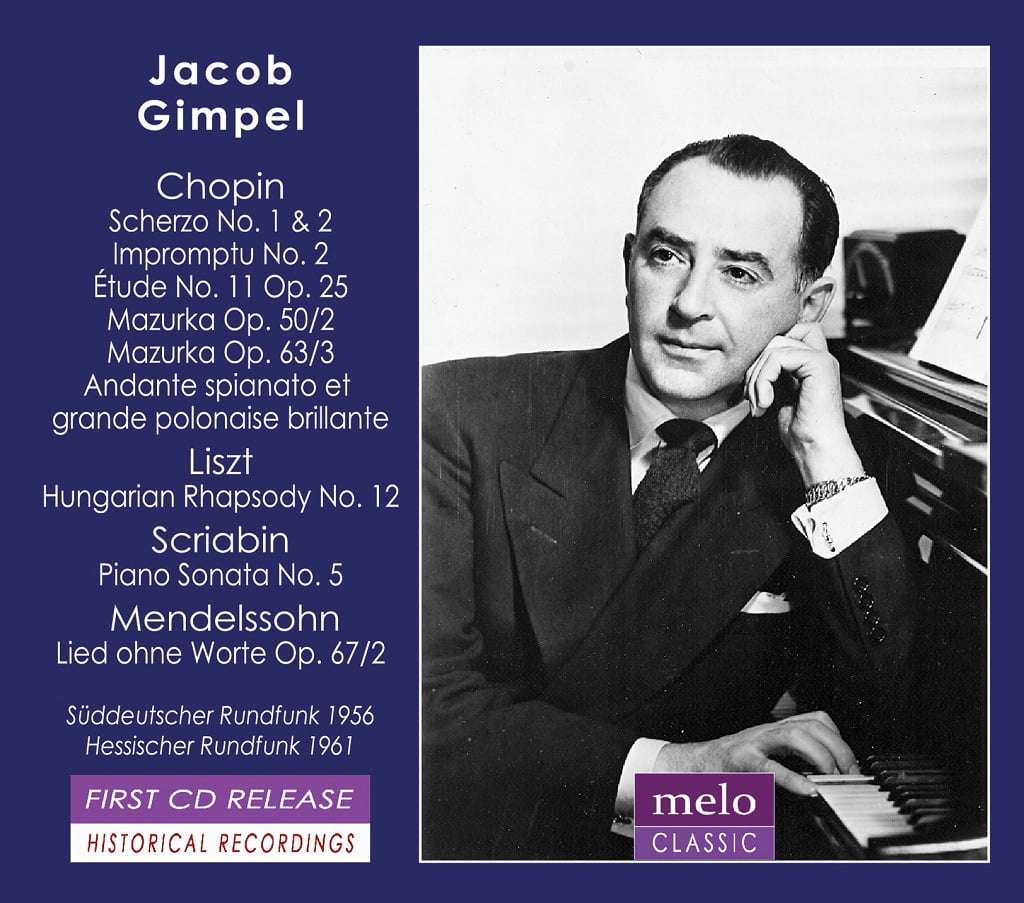 The Pole Jacob Gimpel (1906-89) includes copious amounts of Chopin in recordings from 1956 and 1961. Powerful and poetic artistry is at work here, such as in a respectively richly expressive and sovereign Andante spianato & Grand Polonaise, and then in a selection from the Etudes, Mazurkas and Scherzos (the first two) he continues to impress and delight. Gimpel also bewitches and dazzles with Liszt’s Hungarian Rhapsody No.12, dabbles with the occult in Scriabin’s intoxicating Fifth Sonata – heady stuff – and ultimately charms with a Mendelssohn Song without Words. [MC 1031; 69 minutes; 4****]

Another Polish pianist, Marian Filar (1917-2012), also abounds in Chopin, taped in 1949 and 1952. He embraces the first two Ballades, the B-flat Polonaise, Barcarolle, Scherzo No.2, First Impromptu and the first twelve Preludes from the 24 that are Opus 28. Shape, soul and volatility informs Filar’s playing, yet there is something a little ‘unfinished’ (for want of a better word) about his interpretations, a curious feeling for the listener to have, a need for a more-probing response from the musician yet recognising the sincerity of everything he does, although Prelude No.1 is oddly divided between the hands, the fingers deliberately unsynchronised. Three Intermezzos by Brahms (from Opuses 76, 118 & 119) are included and, conversely, these are altogether special, especially the one in A-major from Opus 118, which is chillingly touching and immediately an encore; it is also three minutes longer than stated. [MC 1026; 68 minutes; 3***]

The Viennese pianist Friedrich Wührer (1900-1975) opens his 1952/54 programme with nothing less than the ‘Hammerklavier’ Sonata. The first movement is rather sedate and clipped, although, like Backhaus, he includes the exposition repeat, which generally throughout these releases are in very short supply. Strong accents apart, there is something elegantly Classical about Wührer’s approach, but whether that is apposite to Beethoven at his grandest and most boundary-breaking is a moot point. He does though come into his own with the slow movement, taken quite spaciously, intimate, thoughtful and spiritually transporting. I am pretty sure there is already a Wührer ‘Hammerklavier’ on CD, but I assume, given Meloclassic’s claims regarding “first CD release”, it’s not this one. Also here is another Schubert ‘Wanderer’ Fantasy, a secure if dogged account; cultured, yes, if lacking for a sense of narrative but with no lack of soul in the Adagio section. We end in light relief with Beethoven’s 12 Variations on a Russian Dance (WoO71), capricious music played with affection. [MC 1023; 73 minutes; 3***]

As for French pianist Jacqueline Eymar (1922-2008), wow and wonderful, what a discovery she is. From the first notes of Mozart’s Sonata in D (K311) you know you’re onto a winner, and throughout this bumper package, recorded between 1958 and 1972 (with the majority of tapings being from the 1960s), she comes across as an outstanding musician allied to an all-embracing technique. For whatever reason Eymar is new to me, and I am so pleased to encounter her now. Her Mozart (she also plays the K332 Sonata) is perfect in tempo, phrase and blend, and Elysian in slow movements, and coming between them is a stunning account of Ravel’s Gaspard de la nuit, full of vivid story-telling; she really goes for ‘Scarbo’, demonic and nightmarish. Chopin’s B-flat Sonata merges authority, splendour and spirit, and, as in the Ravel, she stresses the music’s visionary aspects, not least the turbulent if aphoristic Finale. This is followed by sublime Fauré, the E-flat minor Nocturne.
That’s only CD1. The other disc offer further Fauré, the G-major Barcarolle, beautifully turned and expressed, and suitably elusive yet emotional under the surface. Late Brahms (from Opuses 118 & 119) fares just as favourably, and then Eymar brings out further big guns with Beethoven’s ‘Appassionata’ and Schumann’s Kreisleriana, both riveting through her absolute musicianship and her white-hot sense of theatre. Finally, another Mozart Sonata (K283); if Eymar can be impulsive in Beethoven and Schumann, her Mozart is always balanced and beguiling. [MC 1037 (2 CDs); 2 hours 38 minutes; 5*****]

Another French pianist is the Parisian Léila Gousseau (1909-97), heard here in Concertos, the respective No.1s of Liszt and Brahms, both with Orchestre National de la RTF (sic), the Liszt conducted by Pierre Dervaux in 1953 in the Salle Gaveau, with Manuel Rosenthal leading the Brahms two years later in the Théâtre des Champs-Élysées. Gousseau’s playing of Liszt is of consideration and panache without quite reaching the greatest heights; and the nasal-sounding oboe and strident trumpets may not be universally appealing. The Brahms (with the orchestra better blended) is similarly confident, a respectful reading but not completely compelling, and the pitch may be questioned at isolated moments. As a solo encore, albeit a lengthy one, is Fauré’s Theme & Variations (Opus 73), which Gousseau essays with sympathy and insight. [MC 1028; 79 minutes; 3***] 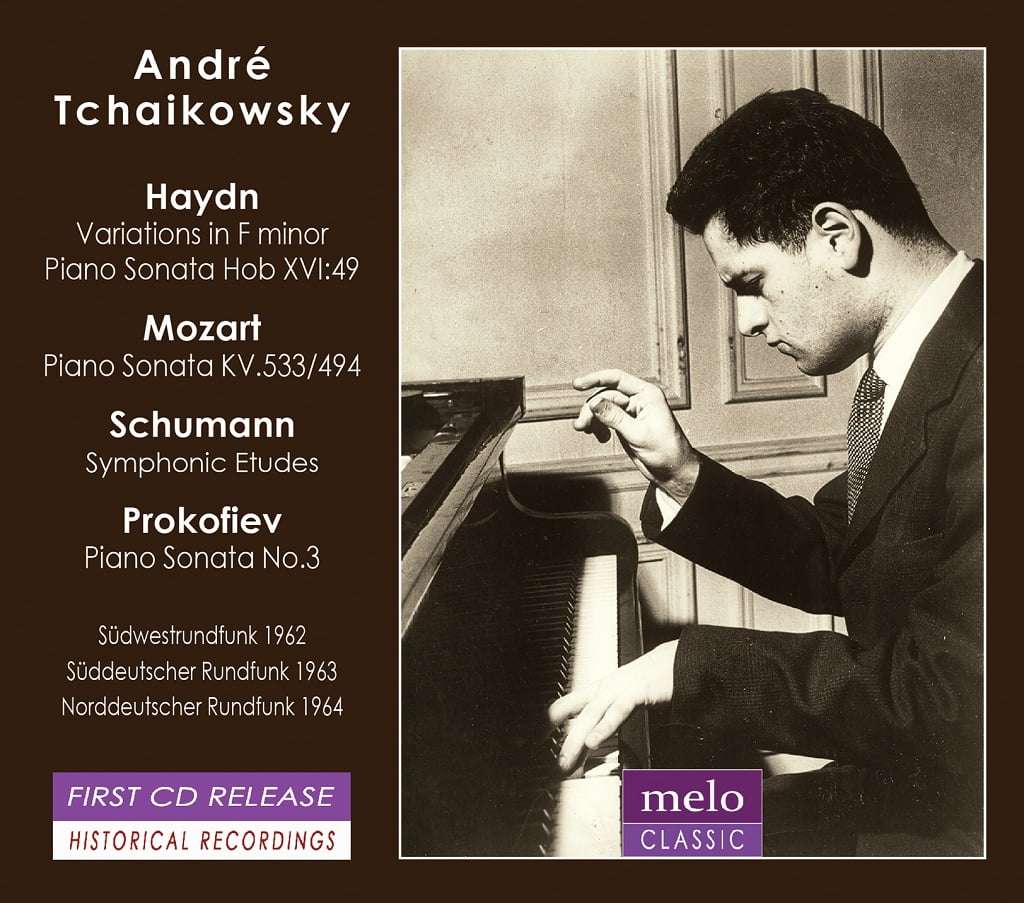 Finally, this time around in terms of the Meloclassic label, another Polish pianist (and composer), the short-lived André Tchaikowsky (1935-82), heard here in the early-1960s in German radio studios playing Haydn, Mozart, Schumann and Prokofiev. Like Eymar, Tchaikowsky draws you in and convinces of his rightness of approach and that he has explored fully the music. Thus he brings out the greatness and ingenuity of Haydn’s F-minor Variations and his E-flat Sonata (Hob.49). Mozart’s K533/494 Sonata follows, bejewelled in its illustration and chiselled in rhythm, while Schumann’s Symphonic Studies (excluding the so-called posthumous variations that Brahms reinstated) is molten in Tchaikowsky’s approach, aflame with passion but also rigorous, slower numbers wonderfully rapt. Prokofiev’s single-movement if changeable Sonata No.3 wraps things up, Tchaikowsky bringing out the score’s various flavours with a sure touch and benevolent enquiry. [MC 1035; 77 minutes; 5*****]

All very interesting, then: excuse me while I run off with the Eymar and Tchaikowsky in particular … and Gimpel. I look forward to sampling more Meloclassic releases.