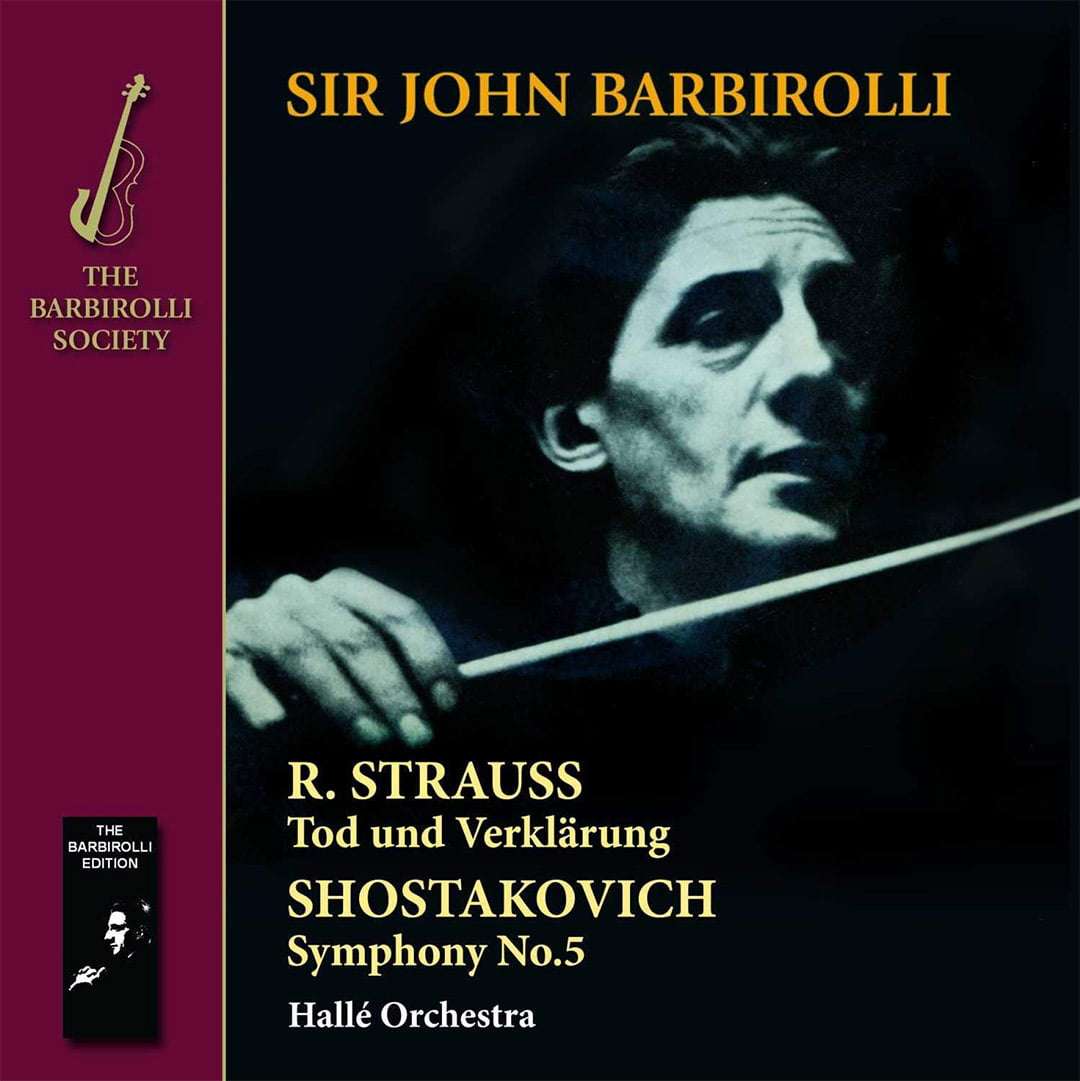 During the last decade of his life John Barbirolli’s music making was decidedly individualistic, and like Furtwängler he never seemed to give the same performance of a work two nights in a row. This individuality can be heard at its finest on disc in say Puccini’s Madame Butterfly and Mahler’s Fifth Symphony and as the Testament CDs of live performances with a great orchestra that worshipped him, the Berlin Philharmonic, the Memories stereo release of Haydn 92, the Elgar and Sibelius Second Symphonies from 1964 with the equally great Boston Symphony and the BBC Legends, LSO Heldenleben demonstrate, he was one of the twentieth century’s greatest conductors.

The Shostakovich has appeared before coupled with Beethoven’s Fifth on BBC Legends, and I see no reason to add to what I had to say about the performance on Classical Source (please see link below) other than it remains one of the great Fifth’s fit to rank with Previn’s RCA version and Mravinsky. Strauss’s Tod und Verklärung is a very difficult work to bring off, because in most hands the culminating transfiguration is decidedly underwhelming (whatever Strauss was striving for he didn’t achieve it). But like Toscanini at La Scala in 1946, Barbirolli doesn’t dawdle in the opening, the ensuing Allegro has real attack, from then on every change of tempo is never allowed to impede forward movement and the final massive forte statement of the main theme has searing intensity. As an added bonus the sound is pretty good, with the Shostakovich having less distortion, greater body and definition than before.

What is apparent in both works is that Barbirolli adopts brisk tempos, which might come as a surprise if you put the Buenos Aires performances on straight after [see link below], because there some of the speeds are far more leisurely, the tempo changes more extreme. And yet the Symphonies receive inspired performances, the Strauss blazes and only the Stravinsky disappoints, so how does he do it? 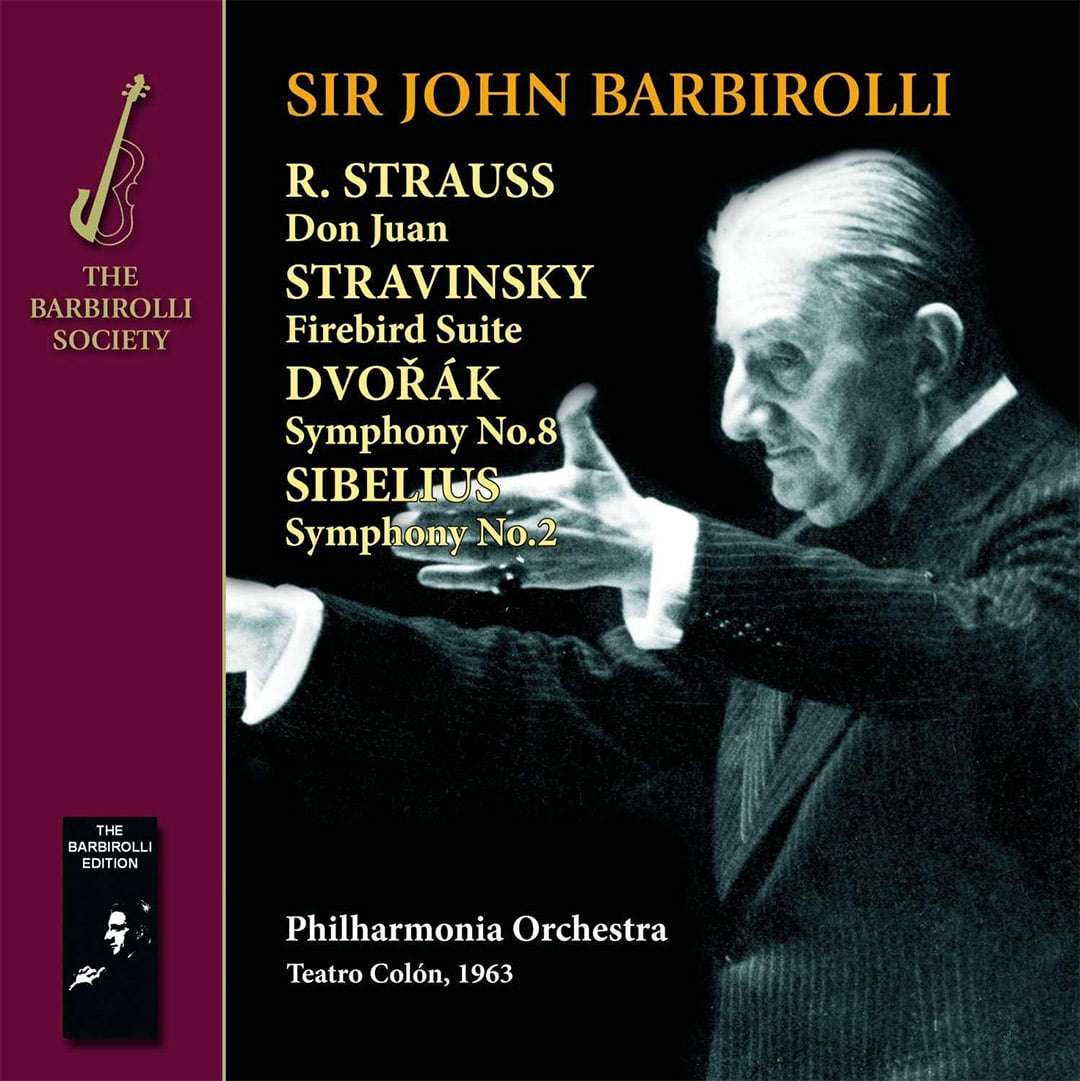 To take the Dvořák, the opening theme is beautifully moulded, the ensuing accelerando sounds natural, as does the massive slowing for the second subject, instrumental lines are carefully delineated, the rhythms sprung, every sforzando is in place, and, crucially, there is a sense of command and absolute belief behind every note. In Sir John’s hands, at a measured tempo, the opening of the Adagio acquires Brucknerian overtones, the string fanfares are dark and serious, yes the second section is more elfin, but the mood remains serious, the rubato and tempo variation are masterly – in effect you are being asked to rethink what this music is about. The string phrasing in the Allegretto grazioso scherzo is beautifully moulded, the Trio taken a tempo, and again there is a sense of quiet, abiding melancholy, which is carried over into the introduction to the finale, where the strings chords are delivered with trenchant power. In the main part of the movement the basic tempo is fast, but not hectic, so the rhythms really bite, the slow section that precedes the coda is sung, the final bars a riot of presto virtuosity, and the audience quite rightly goes mad. This is a masterclass in Dvořák conducting.

Given how fast Tod und Verklärung would be a year later, the way Barbirolli slows right down for, and luxuriates in, the love music of Don Juan may come as a surprise, in the best possible way. There is a touch of Mantovani here: some superb woodwind playing and again real intensity, but there are also passages where the tension drops. And, unfortunately, the audience bellows its approval the moment the final pianissimo chord has died away.

In late 1962 Sir John and Royal Philharmonic Orchestra recorded Sibelius’s Second Symphony for Readers Digest, and the result was a triumph of seemingly improvisatory music-making. As mentioned, in 1964 he conducted it with the Boston Symphony Orchestra and brought the audience to its feet, with the orchestra joining in the applause. This Philharmonia performance is marginally the slowest of the three in all bar the last movement, where the Bostonians are a substantial minute faster. What all three have in common is the ability to effortlessly change tempo and mood without sacrificing momentum. Indeed, you will probably never again hear such volatility, violence and darkness writ large in this work.

This doesn’t mean everything is slow. The Scherzo is very fast, as are sections of the first two movements, but this is immensely serious music making. In the last movement the big tune is phrased differently on its second appearance, the second subject is slower, but rhythmically defined and shaped, and the quiet woodwind-led exploration of the main themes that will lead to the plunge into the minor moves slowly, inexorably forward, and there is no change of tempo for the coda. In lesser hands and with weaker orchestral playing – despite Walter Legge’s mutterings about falling standards – the Philharmonia was still a fine band in 1963, although the ensemble wasn’t quite as crisp as in the 1950s. The performance might have fallen apart, but Barbirolli holds the listener in a vice-like grip, the sense of concentration is absolute; once heard, never forgotten (although you still need the Royal Philharmonic and Boston performances – the orchestral playing in the latter is to die for), which brings us to the Firebird and the sound.

You might have thought that being one of the great conductors of Austrian dance music, be it Gustav Mahler or Johann Strauss, and given the brilliance of the other performances, Barbirolli would have brought Stravinsky’s score to pulsating life. But what you actually get is a tired, very slow rendition, which almost completely grinds to a halt in the coda. Nevertheless, the audience still went mad at the end, so maybe in the flesh it made a better impression.

The mono sound is disappointing. The overall balance is OK, but the woodwind seem to be stuck-out in front of the rest of the orchestra, and while Barbirolli liked prominent timpani, they are also unnaturally dominant (a similar thing happens in the celebrated 1941 Toscanini, Teatro Colón, Beethoven Ninth, so maybe having an orchestra on stage with only a single microphone caused this imbalance). All of the instruments lack body, so you only get an impression of what the strings sounded like in say the big tune of the Sibelius. The brass don’t rasp, and there is some overloading and crumbling. And yet, despite this, enough remains to allow anyone to appreciate Barbirolli’s interpretive genius and as such this carries the highest recommendation.