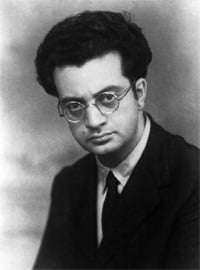 “Less is more”. Well, maybe. Kaikhosru Shapurji Sorabji (1892-1988) did write miniatures. You can hear Jonathan Powell play some of them, with much more Sorabji besides, at the links below. But this composer is famously expansive, in method and time-scale. He wrote millions of notes, mostly for solo piano (on anything up to seven staves), and most of them are still unheard.

Powell follows his Sorabji recordings, and his live accounts of Opus Clavicembalisticum, with preparations for the world premiere of an enormous (and, by the composer’s estimation, good) piece, the six-hour-plus ‘Dies irae’ cycle, from 1948-49. Just as a “try-out”, on a chilly London night, Powell treated a handful of listeners to roughly the first half of the work. Powell played non-stop, full-tilt, for two-and-three-quarter hours.


And it was a major event. I’ve heard quite a bit of Sorabji, the man who wrote “for serious musicians and serious listeners only”, and thought I knew just what I thought of him. He’s the man who called Arthur Bliss “Arthur Piss”, and who compared the proletariat unfavourably with shoals of fish. Of the present opus, he wrote: “the enormity of Sequentia Cyclica is such as to place it mercifully high out of danger of the mob of gentlemen (and perfect pansies) who play with ease (as if it were a nasal catarrh).”

But I was entirely blown away by this experience. Rather than the lonely, defensive Sorabji vitriol, I was moved to think more of the teenaged composer being castigated for being a “Black boy” by a vicar on the tube. Or of the vehement gay sensibility that could extol “the most heartening and delicious spectacle in a dull and naughty world, a fine large penis in erection”. This music hurtled to new planets and galaxies of expression, making you (literally) catch your breath, and making other music, for the moment anyway, unthinkable. Like Debussy at his best, it sounded like life. As Powell brought section XIII (‘Aria con fantasia e dolcezza’) to a quiet close, I found myself highly disappointed that it was all over, caught up in the huge wave of the composition, and longing to hear the concluding parts. 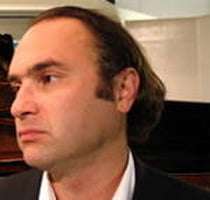 The piece, even just a half of it, expresses so much of real storm, stress, love and passion, with climax after stunning climax, somehow graded by Powell’s improbably accurate fingers, and powerful frame, into something both coherent, and moving. I don’t think the pianist realised just how well it all hung together, and how big the cumulative effect actually was. I used to think Sorabji could make no-one cry but pianists. Yet the big moments from Powell were charged with the kind of emotional force your average super-virtuoso pianist-composer can only dream about, always mixed with the bitter ironies implicit in most mature Sorabji. The music occasionally strains and stretches to rise above irony, agony, and everything in history and society (failing, of course), and it’s probably in those moments that the composer’s admirers start to sense something great going on.

Thanks to history, and the composer’s own performing embargo, the majority of Sorabji’s works have come to seem to stand outside of time, or else to sound like one big, rather same-y post-Busoni/Scriabin opus. The Sequentia cyclica is contemporary with Britten’s “Saint Nicolas” and “Spring Symphony”, the era of the late works of Prokofiev, and the first by Boulez. It was the time of the Zhdanov attacks on Shostakovich and colleagues, in the Soviet Union, and of the birth of the welfare state, in the more-mildly socialist, and just-post-war Britain, where Sorabji plied his solitary non-trade. He’d already written an extended set of ‘Dies irae’ variations in 1923/26, and often returned to the theme. In the late 1940s, as part of a very extended interruption to work on the epic Third Piano Symphony, he chose to build a big structure on more than just the first few phrases of this done-to-death (sorry) tune. He completed it on 27 April 1949, and dedicated it to Egon Petri.

The theme, Largo, is to be played like an organum, and it’s the whole ‘Dies irae’ chant. The familiar opening phrases crop up all the time, of course, but the resulting piece does not sound like a cross between Liszt’s Totentanz and Rachmaninov’s Rhapsody on a Theme of Paganini. Far more varied, Sequentia doesn’t really sound like anything else. This being Sorabji, though, the contrasts can still seem alarming. Section IV (‘Tranquillo e piano’) develops into a wild drama lasting as long as most symphonies, while parts VI, VII, and XI are tiny, and intensely quirky. They trade expressive expansion for the extremes of rhythmic oddity, or dynamic psychosis. The easiest part to pigeonhole is probably section VIII (‘Tempo di valser’) which Powell called a “concert waltz” but which seemed to inflate the possible examples of Scriabin, Chopin, Shostakovich and Ravel until they burst. The expressive range of the coda then transcended any notion of precedent. The long section X, (‘Il tutto in una sonorità piena, dolce, morbida, calda e voluttuosa. Cantato dolcemente’) was like a visit to Kew Gardens, in and out of the hothouses in summer, until the emotional unrest and scarcely controlled passion once more dominated colour, and became unbearable, often aggressively so.

Powell, with the help of a virtuoso page-turner (working with an unruly stack of loose leaves of A3), conveyed all of this with strength, sensitivity, and a determined sense of line (through dynamic arches as well as contrapuntal labyrinths) though the work (as we’ve so far heard it) contains few calm, quiet tunes. There’s no place of rest. It’s tempting just to unload the wheelbarrow of well-worn superlatives for Powell and Sorabji, starting with ‘stupendous’, and have done with it. But the achievement is the more remarkable, given just how little Powell had to go on. As Sorabji writes: “The comparative lack of what are quaintly called ‘expression marks’ in this work is thus explained. The Composer considers that the music itself makes clear what ‘expression’ is needed, if any in any particular passage. The ‘intelligence’ of the player will do – or undo – the rest. And, though usually to trust upon the intelligence of performers is to lean upon a broken reed upon which if a man – or composer lean – it will pierce his hand – and ruin his music.”

Like Sorabji, this might all seem rather off-putting and ludicrously snobbish, presaging yet another torrent of overly-garrulous, hermetically post-Romantic note-spinning. But it’s more than that. Much more. And it was a huge privilege to be there, and to hear it, just across town from the composer’s mum’s house at 175 Clarence Gate Gardens, NW1, where he wrote the whole thing. Powell did it all in the tiny basement of a music shop, on a baby grand, and as Sorabji says: “… performance itself also is a hint of what is there, a hint limited by instruments ears and all such things”. And also by the capacity of tired bottoms to stay on seats all night, or of minds to link on the big scale, and of even the best pianos to stay in tune. Powell will need at least two ‘grands’ for all 27 sections, I’d have thought, if the full show does happen. Roll on that complete (2010) performance: there’s still a ‘Passacaglia’ (with 100 variations) and a quintuple fugue to come. Sequentia cyclica already seems a heartening and delicious spectacle. The entire work promises to be, more or less, a major, and unruly masterpiece. Don’t miss it.