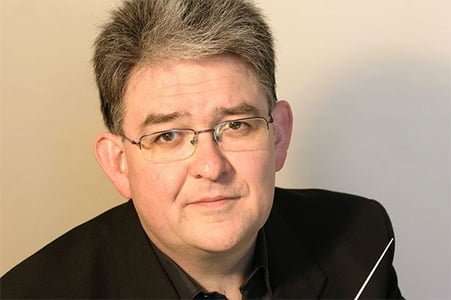 Presteigne is a small Welsh town nestled just inside the principality, and has played host to this feast of (mainly British) music for over thirty years. The Festival’s commissions run to over 100, a remarkable tribute to the long-serving Artistic Director, George Vass, whose tastes in music can be described as being on the conservative side but whose drive and ambition nevertheless provide his capacity audiences with untold cultural nourishment. This Festival has not only music but poetry, art, archaeology and lots of informative talks on topical Festival subjects. I attended the early two days, which offered an enormous range of events, from Britten’s Curlew River to Stravinsky’s Concerto for string orchestra. Included was new music by David Matthews, 70 this year, and other Festival regulars, all displaying their talents to excellent purpose.

Sara Trickey (violin) and Claire Hammond (piano) played Schubert’s Violin Sonatina in D (really a full sonata) in a genuine partnership, followed by Aria by David Matthews, a work not a million miles away from the expressive world of Berg and containing a multitude of flavourings and colours. Joe Duddell’s All Stars Aligned, written in an unashamedly diatonic style, provided a buoyant and feel-good sense of purpose. Brahms’s First Violin Sonata (G major, Opus 78) was played with poise and eloquence, never losing sight of its Classical heritage but also enthused with warmth from the Romantic era. The evening concert was a double-opera bill; a new work (premiered the previous evening in the same venue of St Andrew’s Church), Hagar in the Wilderness, music by Sally Beamish, libretto by Clara Glynn, followed by a respectful interval for Curlew River.

Hagar in the Wilderness is a serious attempt to bring the dilemma of choice within a religious context to a contemporary (presumed largely non-religious) audience. The brutality of Abraham, acknowledged patriarch of the three monotheism faiths, is highlighted so that no-one can but wonder as to whether the supposed goodness enshrined in such religious impulse really does exist. The fact that the divine, in the form of God, intervenes over the mere mortal weakness of Abraham perhaps points to hope in the future of faith. Beamish opens her hour-long opera with an impressive melodic pulse provided by the percussion section. Thereafter the story unfolds with too much dialogue and not enough music. This imbalance was bought into defined relief in Curlew River, an adventurous (as opposed to revolutionary) work by the mature Britten, in which the composer amply demonstrates how less (in the form of dialogue) is more (in the form of storytelling through sounds). In the authentic church setting Richard Williams’s production was a perfect replica of the original undertaking in Orford Church near Aldeburgh in 1964. Almost sublime and certainly most beautifully crafted, the opera proved a credit to all concerned. 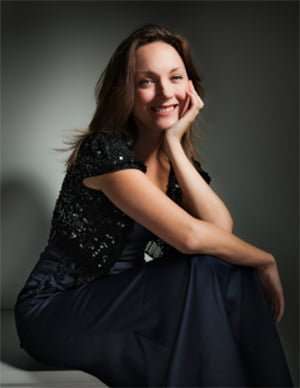 George Vass conducted both operas with care, and concern for balance. Kirsty Hopkins as Hagar was authentically wretched in her role as someone betrayed by a supposed-better human being and the standout singer in Curlew River was Mark Milhoffer in the role of Madwoman, dramatic but never melodramatic. Superb in every sense. Indeed the evening was a triumph for Vass and his performers.

The following day’s afternoon concert was given by the talented Claire Hammond in the usual Festival mix. Hammond made a big impression at the recent Cheltenham Festival in a short but virtuosic programme of modernist works At Presteigne the demands on her fingers were slightly less (no plucking the inside of the piano strings!) but her stamina carried equally deserving high marks. Two of Shostakovich’s Preludes and Fugues (Opus 87) – 18 & 15 – were dispatched with calm authority and exciting zeal. Her playing of Schubert A major Piano Sonata (D664) showed how the opening singing line pointed towards the Romantic sensibility of future composers but that now in today’s contemporary music seems lost forever.

Certainly no evidence of a singing line was heard in the works in between. Instead, the elaborate use of musical imaginations struck home in Reflections on Debussy, Five Aquarelles for Piano, one each from: James Francis Brown (Dunwich Bells), David Matthews (Cap Gris-Nez), Peter Fribbins (L’extase des jets d’eau), Alan Mills (Narcissus) and Robin Walker (Rocked in the Cradle of the Deep). Robert Peate’s Pearl was an elegiac piece about loss and mourning which embraces reflection and anger. It was moving and transient.

A preconcert talk given by David Matthews, Michael Berkeley and John Bridcut provided insights into Britten’s character, often from first-hand sources: Berkeley was Britten’s godson and Matthews acted as Britten’s late apprentice. Britten seems to have cultivated deliberately the appearance and manner of a prep-school master, middle class and respectable, devoted to writing music of use to the widest possible audience. This, indeed, is how I grew up knowing him from a distance. Underneath, of course, was a flaming river of anxiety and torment. His homosexuality hung over him (at a time when it was illegal) like the Sword of Damocles. Trying to understand these dilemmas in Britten’s life only helps with a mature response to appreciate the music he produced.

The final concert I attended was one of superb richness. Was Lennox Berkeley an ‘English’ composer after his main studies in Paris? Well, his delightful Serenade for Strings, written in 1939, was probably over-shadowed by two contemporary masterworks for strings by his friends, Britten and Tippett. Today we can enjoy the Serenade on its own delightful merits. David Matthews’s new Double Concerto for Violin, Viola and Strings is surely very English with its wistful opening melody so beautifully carried on by the two soloists. It is full of invention; the contemplative middle movement has a central episode where the soloists imitate nightingales; the finale breaks into a jubilant Irish jig.

Roxanna Panufnik rearranged music by her distinguished father into a brief, effective string piece, Moditwa. This has the merit of a uniform style, unlike the recent Clarinet Concerto by Joseph Phibbs, whose three movements rather disconcertingly change modes in a rather alarming way. It was impossible to feel that this music had any semblance of unity about it. After the cornucopia of British music the edgy sounds of Stravinsky in his Concerto in D fsounded the most modern work of the evening! George Vass was the impeccable conductor throughout. Sarah-Jane Bradley, viola and Sara Trickey, violin, conjured up delicious sounds in the Matthews and Catriona Scott bought a sense of clarity where she could in Phibbs’s work.