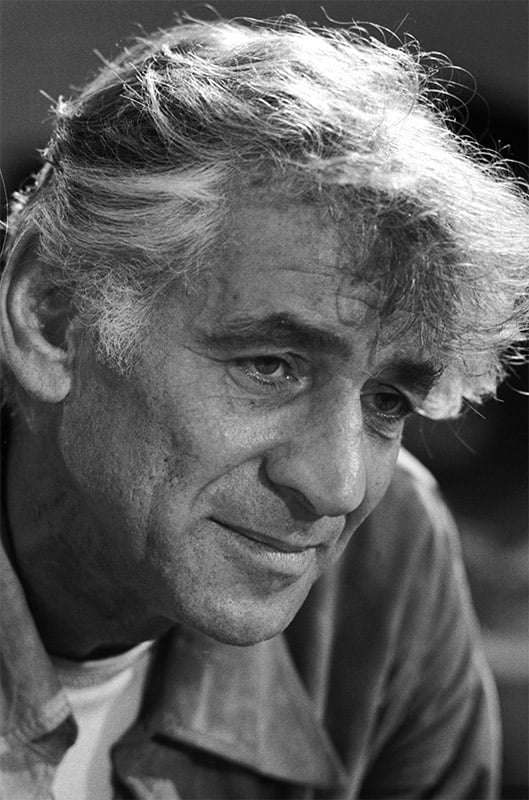 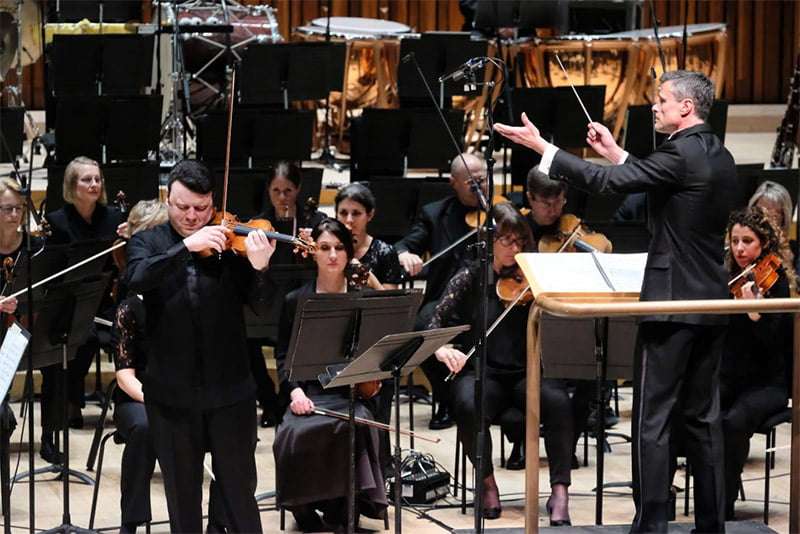 While the LSO, with Marin Alsop and Simon Rattle, had already kicked off the Leonard Bernstein centenary celebrations, the most concentrated focus on Bernstein the composer came with the BBC Symphony Orchestra’s latest Total Immersion day. With works from five decades, the three concerts explored perhaps the less-familiar repertoire, although there was an unexpected nod to his Broadway hits. Coupled with a screening of one of his fifty-three Young People’s Concerts with the New York Philharmonic and an interview with Edward Seckerson this fleshed out not only the music of Bernstein but also the man in a day that was definitely more than the sum of its parts.

Starting with What is Impressionism? – first broadcast by CBS on 1 December 1961 – we joined the massed well-dressed children and parents in Carnegie Hall for a whistle-stop explanation of Debussy’s La mer, topped by a brilliant performance of the final music from Ravel’s Daphnis et Chloé. With sound quality better than the picture (some of the shots looked as if the lens had been smeared with Vaseline), this showed off Bernstein’s communicative flair not only to the youngsters bur also the Philharmonic musicians. The musical analysis may have been at times perfunctory, but it illustrated facets of Debussy’s genius in an approachable way and it was nice to see a concert filmed warts and all – during the final movement of La mer Bernstein’s microphone fell off and they had to improvise while he introduced the Ravel.

Young people – though not quite so young as those 1961 New Yorkers – were the focus of the first concert of the day, in Milton Court. Guildhall School students got a chance to shine in this cradle-to-grave programme, which included one of Bernstein’s earliest published pieces – the two-movement Clarinet Sonata from 1942 – and his final large-scale work, Arias and Barcarolles from 1988. There’s relatively little Bernstein chamber music, and both the Sonata, and Touches from nearly four decades later (1980), were two of only three pieces during the day that doesn’t have a direct textual basis. You could tell Bernstein was still finding his compositional voice in the Clarinet Sonata, composed for David Oppenheim. There’s a rigorous Hindemithian quality in the opening slower movement (Hindemith had been at Tanglewood the first year Bernstein attended, 1940), while Latin rhythms seep into the faster, lighter second (Bernstein having heard Cuban music on the radio when holidaying in Key Largo). Charlotte Bartley negotiated Bernstein’s twists and turns neatly with Michael Sikich taking the virtuosic piano part. More impressive was Ryan Drucker’s impassioned performance from memory of the crunchy music Bernstein composed for the Van Cliburn Piano Competition in 1980, Touches, subtitled ‘Chorale, Eight Variations and Coda’.

The other non text-based piece is Prelude, Fugue and Riffs which ended the lunchtime concert, from the fervent hands of Professor of Jazz, Scott Stroman, who explained how affected he had been growing up in Indiana by seeing Bernstein’s Young People’s concerts. His nineteen-strong student jazz band more than filled Milton Court Concert Hall, leaving clarinettist Gustavo Clayton Marucci rather too refined and demure – I wanted a little more character and volume from him and a dash of showmanship. Having said that, Bernstein’s jazz compendium never fails to make a thrilling impact; interestingly, composed for Woody Herman in 1949, his group disbanded before it could be premièred, honours falling Benny Goodman (who made the first recording).

The most substantial work of the lunchtime concert had come first – the half-hour cycle of vocal duos and solos, accompanied (like its inspiration, Brahms’s Liebeslieder-Walzer) by two pianists at one keyboard: Arias and Barcarolles. This brought the day into focus, with Bernstein’s overriding musical facets – lyricism and lyrics. He was an irrepressible melodist and had an acute ear for words, whether poignant or witty. Each of these eight miniatures is a little drama – and his technique here is the same as ten years earlier in his setting of numerous poets in Songfest. Anne Reilly and James Newby had the measure of Bernstein’s own texts and the two from elsewhere: the nonsense ‘Little Smary’ (a lost cuddly toy) attributed to Bernstein’s mother Jennie, and the Jewish song about a young red-haired violinist showing the older musicians a thing or too, supposedly a tribute to Bernstein’s grandfather. Pianists Michael Sikich and Krystal Tunnicliffe (sometimes solo, most often as a pair), also had their own vocal parts, scatting and whistling in ‘Mr and Mrs Webb Say Goodnight’. It is also typical of Bernstein that Arias and Barcarolles has an overtly personal inspiration – that of his life and family.

Over at St Giles Cripplegate, the BBC Singers featured four vocal works – again stretching Bernstein’s career – starting with his only mature work commissioned for a synagogue, Hashkiveinu (‘Lay us down to sleep’) in 1945. For organ (Stephen Farr) and cantor (Tom Raskin) its three sections came over strongly in the resonance of St Giles’s, before we turned to Christianity for the Missa Brevis composed – some three decades after Bernstein had been asked for it – for Robert Shaw, and only premièred in Shaw’s final season at the helm of the Atlanta Symphony in 1988. Shaw had expressed a liking for Bernstein’s incidental music to Anouilh’s play The Lark which made it to Broadway in 1954, and we not only heard the wonderfully intricate Mass, with percussion accompaniment, reworked from the play’s score, but one of the original French choruses, so short that the chant was repeated twice by Ragnar Bohlin before the Singers took to whistling as Owen Gunnell’s tabor-tapping receded into silence. The best-known work (to me) took a little while to settle, Chichester Psalms – in its original ‘reduced’ scoring prepared by Bernstein in advance of its premières in 1965 (for mixed chorus in New York, for boys’ and men’s voices in Chichester Cathedral two weeks’ later): organ, harp (Tanya Houghton) and percussion (Gunnell again) – seemed more poignant in this church setting.

One of the problems with Total Immersion days is stamina, and finding time to eat. So forgive me, reader, for missing the education project creating a piece based on Bernstein’s music that overtook the Barbican’s foyers while I dined. Thus fed and watered, the final performance featured the BBC Symphony Orchestra under sprightly David Charles Abell in a high-octane rendition of the Candide Overture, making me wonder if conductors should take Bernstein’s advice about the Scherzo of Mahler’s Fifth Symphony which – as Seckerson had related in the interview – Bernstein thought most took too fast. Here Candide might have benefited with just a little bit of air.

Vadim Gluzman was the spruce soloist in Serenade (1954), written for Isaac Stern and inspired by Bernstein’s reading of Plato’s Symposium and taking the idea of the nature of love, with each movement a different ancient authority expounding their ideas. It’s a curious idea, which perhaps shouldn’t work, but with Bernstein’s innate melodic invention that can turn from melancholy to merriment on an instant, it is an infectious concoction. Gluzman even danced a step or two in the first movement, the faster section portraying Pausanias. There’s a rhythm in the ensuing Aristophanes Allegretto that seems to have come straight from Candide (yet to be composed), while following the dogmatic haste of Eryximachus increased the pathos of the music, Agathon’s Adagio, before Socrates himself brings the work to a close. Cellist Susan Monk got special mention and an embrace from Gluzman for their duet.

Words to be sung – which is where we’d started earlier in the day – is where we ended, with Songfest in what is only London’s third full performance since Bernstein conducted the UK premiere with the BBC Symphony Orchestra in 1982 (the composer also led it at the Proms and Leonard Slatkin conducted a Festival Hall account). It is a glorious work – setting thirteen poets in twelve songs (the fifth pitches Langston Hughes’s ‘I, Too, Sing America’ against June Jordan’s ‘Okay Negroes’) for six singers, who start together in Frank O’Hara’s ‘To the Poem’, reconvene after three solos and three ensembles, for E. E. Cummings’s ‘if you can’t eat you got to’, and – after a final trio of solos – end the piece with Edgar Allan Poe’s ‘Israfel’. The trick is to get a set of well-matched sextet, and this performance achieved that with some aplomb, not only colourful in attire but characterful in timbre. Nmon Ford (a future Crown in Porgy and Bess for ENO) persuaded in Laurence Ferlinghetti’s surreal ‘The Pennycandystore Beyond the El’ while facing J’Nai Bridges’s opulent tone in the clash of African-American poets, while Brandon Cedel, backed with humming by others, eloquently traced Walt Whitman’s personal anguish in an unpublished poem that alludes to his homosexuality, ‘To What You Said’. Sophia Burgos sang in Spanish Julia de Burgos’s poem to herself ‘A Julia de Burgos’, while Nicky Spence (Gregory Corso’s ‘Zizi’s Lament’) and Fleur Barron (‘What Lips My Lips Have Kissed’ by Edna St Vincent Millay) had to wait to the end, following Bridges’s ‘Music I heard with You’ by Conrad Aiken, to contribute.

Each setting is delivered in a distinctive soundworld with a little bit of Bernstein genius, seeing the drama and teasing out the fun or pathos depending on the text. As David Charles Abell mentioned, the penultimate song (‘What Lips My Lips Have Kissed’) is perhaps the most Mahlerian and, in the spare dark scoring, I might have even gone further to suggest Berg. It’s a curious melange, for which I’ve always fallen and this performance succeeded effortlessly, and Abell was able to hold the audience so that applause only graced the very end. That the performers were having fun was clear in the encore – ‘(I Like to be in) America’ from West Side Story, with our three gentlemen getting into the spirit by imitating a trio of Puerto Rican girls.