Gerard McBurney introduces Richard Rodney Bennett on film and an interview with Tom Service, with Gill Graham and Meg Peacocke 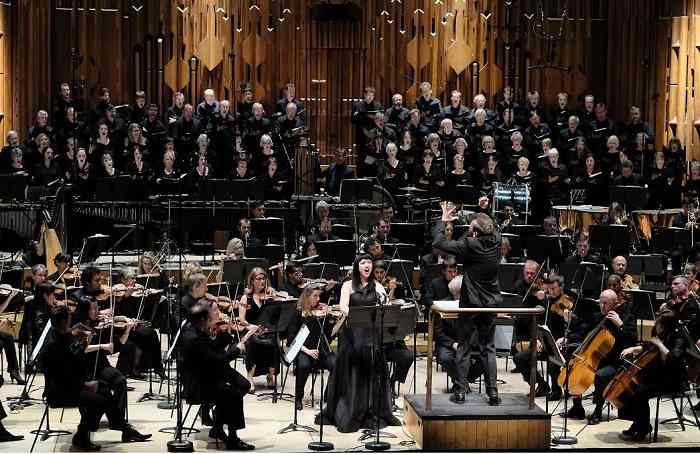 The latest in the BBC Symphony Orchestra’s Total Immersion days paid long-overdue tribute to one of Britain’s most versatile musicians, Richard Rodney Bennett. Just how versatile I found out during the day itself, especially in the talk that formed the centrepiece of the five events. Given Bennett’s fondness for collage, quondam pupil and later friend Gerard McBurney offered a collage of Bennett himself, from two films – the first a documentary made in 1979 for Central Television, just as Bennett was emigrating to New York; the second a series of filmed interviews with Tom Sutcliffe made in the year of Bennett’s death, 2012. McBurney chipped in with anecdotes about Bennett’s irascibility in the face of any sort of officialdom, anything in fact that got in the way of doing what he loved, and the talk ended in a panel discussion with Bennett’s publisher and friend Gill Graham and Bennett’s sister Meg Peacocke, who latterly collaborated with him by providing poetry for him to set. Even though he took to teaching (and a later pupil, Scott Dunn conducted the middle concert), he didn’t enjoy his own studentship at the Royal Academy of Music, even though he and his good friend there, Cornelius Cardew, forged their own path and, after six months subterranean practice, gave the UK premiere of Pierre Boulez’s Structures Book I.

Extraordinarily, not only did Bennett hitchhike annually to Darmstadt (he didn’t really like Stockhausen’s lessons), he went to Paris in 1957 to study with Boulez (the Frenchman was never really sure why). While his internal disposition, which always wanted to find an audience, saw his main musical career head towards film music and jazz (the latter both as composer and performer), he retained a keen eye for the kernel of a score and saw this ‘serious’ side of his character just as one of the many rooms in his musical house. While the day offered nothing really serial, it ended with two determinedly modernist works which also unashamedly display Bennett’s likeable qualities. The talk portrayed him as an engaging and genial man, with the widest range of musical interests. 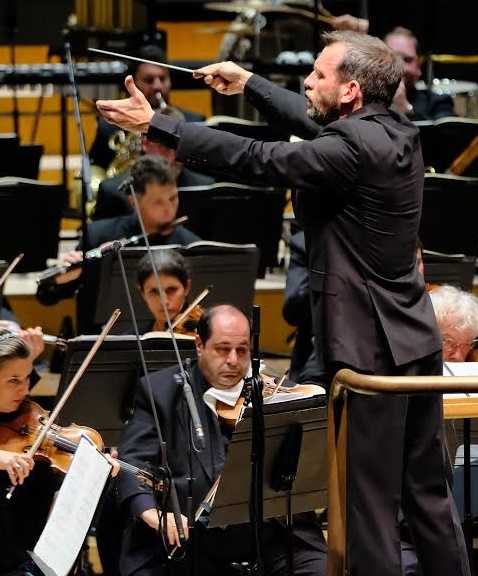 He fell into film music (his first score was for a documentary about insurance) and that’s where the day started, with a screening of Sidney Lumet’s 1974 adaptation of Agatha Christie’s Murder on the Orient Express with an all-star cast joining a heavily made-up Albert Finney as the great Belgian detective Hercule Poirot solving the case of the murder of an American art collector (Richard Widmark) as the famous Pullman steams through the Balkans (before getting stuck in a snow drift). It’s all fabulously stagey stuff, and over forty years on, I lapped it up, with Bennett’s fantastic score astutely knowing exactly when it needs to lift the visual element onto another plane. The long shot when the titular train slowly takes leave of Istanbul, accompanied by Bennett’s gradually accelerating waltz, perfectly adopts a rhythm of the wheels and speeds the carriage of murderers into the plot, is one of those great staging-posts in my cinematic journey, and it was fascinating to compare the film’s use of this recurring theme to David Lindup’s Suite from the score we heard later, where episodes are largely undeveloped and all-too-quickly the waltz theme returns. And the Suite ignores Bennett’s Grand Guignol opening sequence (the newspaper headline résumé of the horrific kidnap and murder of young Daisy Armstrong) which collides together film noir and horror in its musical fingerprints. In some senses the screening was like a period performance; rarely now do you see film reels, with characteristic beginning and end-of-reel deterioration of the stock. Also the titles – with not only composer but orchestra in the opening credits, and the abrupt final credits, without the legions of names scrolled through as in modern production – were from a different time. And there’s another difference over the years – nowadays everything is underscored, but Bennett (and Lumet) knew the value of silence, so the whole of Poirot’s exposé needs no musical pointing.

Next up was the chamber concert at Milton Court, courtesy of Guildhall students. The opening work, the marimba solo After Syrinx II (one of five works inspired by Debussy’s for-flute Syrinx), seemed the least idiomatic of Bennett’s works on show, the numerous short movements not cohering even under Molly Lopresti-Richards’s dedicated beaters. Oboist Janice Chen fared much better in the appositely titled Arabesque, perfectly judged to exploit the throaty nasal sound of the instrument. Clarinettist Heather Ryall was given similarly characteristic music for her instrument, contrasted in three movements, in the Sonatina, written for a Northumberland young musician’s competition in 1980. More substantial – and recognisably fun – were 2002’s Songs before Sleep originally written for Jonathan Lemalu and here taken by fellow Samoan, Benson Wilson accompanied mercurially (as the score demands) by Dylan Perez. The five extended fairytale rhymes are heightened in their comic surrealism by Bennett’s music, delivered with wry dryness. I hope the songs become a major weapon in Wilson’s recital arsenal. Best of all, though, was Noctuary for piano – a 25-minute set of variations on Scott Joplin – originally intended for the ballet but dazzling enough in Emiko Edwards’s scintillating performance.

Over at the Barbican Hall, the BBC Concert Orchestra and BBC Singers were conducted by Scott Dunn. The BBCCO started with 1995’s Partita (a BT/ABO co-commission for professional and amateur orchestras) and continued with Dunn’s orchestration of four of Bennett’s jazz songs sung by his friend and collaborator Claire Martin. She reinforced the picture of Bennett as a warm, loyal friend and a brilliant, versatile musician. Partita is a three-movement tribute to publisher Sheila MacCrindle and was, by his own admission, “the hardest thing I ever did in my life.” From its propulsive Walton-like opening, with febrile solos contrasted with the lyrical second subject, via its central ‘Lullaby’ – not for the last time in the day with a fantastic viola solo (Timothy Welch), later supplanted by a gorgeously mellow horn contribution (Mark Johnson) – and dancing Finale, Partita is energetic, robust and tender by turns. 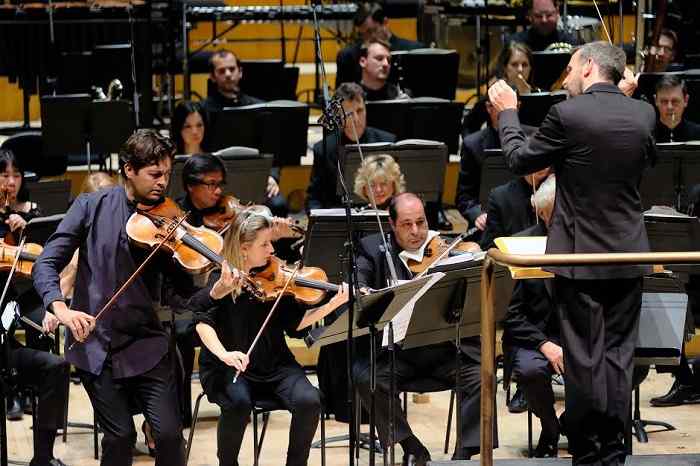 The songs from Claire Martin showed the delicious cabaret style of Bennett – following in the footsteps of his earlier duo with Marion Montgomery. Dunn’s orchestrations were apt and witty, starting with what you might term Bennett’s ‘singing will’, Goodbye for now, which adopts a Sondheim-esque demeanour and even some musical phrases from ‘The Ladies that Lunch’, followed by ‘Early to bed’ written for Blossom Dearie. Bennett’s love-affair with New York, ‘I Never Went Away’ and his hate-hate relationship with the countryside ‘Let’s Go and Live in the Country’ both sported Bennett’s expertise as lyric writer as well as composer and are consummate examples of the modern song, lovingly delivered by Martin.

From eighteen BBC Singers, we had two carols – ‘What sweeter music’ (1968) and ‘Puer nobis’ (1980) – and the more substantial Andrew Marvell setting ‘The Garden’, perhaps an odd choice given Bennett’s avowed dislike of ‘green’ (i.e. the country), but explained by it being a 2006 gift to the young singers of Glimmerglass Opera (the then summer home of the now-defunct New York City Opera) after its 2004 revival of his opera The Mines of Sulphur. I was reminded of Vaughan Williams’s Serenade to Music, not least in the subtle solo lines that emerge out of the choral textures, beautifully rendered and with occasional ‘backing’ from pianist Anna Tilbrook. Scott Dunn has the deepest affection for the work.

Vaughan Williams also came to mind with the BBC Concert Orchestra’s strings in place for Reflections on a 16th Century Tune, with a quartet similarly rising out of the texture. On the back of that, the Suite from Murder on the Orient Express was not strictly necessary; its quick-fire repetition of the waltz, and the all-too-brief episodes of foxtrot and tango, fails to do Bennett’s score justice. 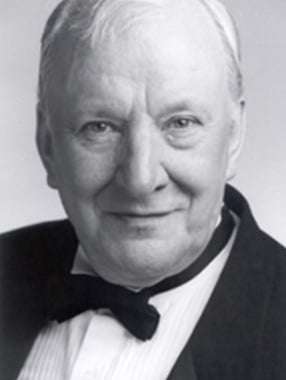 The evening concert, with the BBC Symphony Orchestra, started with two pieces broadcast live: Bennett’s Third and final Symphony from 1987, smaller in orchestration and more tonal than his earlier two such works (from the 1960s); and, taken from his 1972 score for Lady Caroline Lamb, the Elegy for viola and orchestra, here with rich-toned Laurence Power. The Symphony – like Partita – is in three movements, but largely slow in tempo with feverish outbursts. Its overall design and ease of accomplishment (if Partita was his hardest to write work, the Symphony “wasn’t written with any huge difficulty; it was somehow saying spontaneously what I wanted to say; and I loved it”) pour naturally from the page and Rumon Gamba and the BBCSO wore it lightly. Elegy was like a sorbet, lighter in emotional content if lyrical and involving.

Best of all was the second half, ending with Bennett’s 1982 BBC commission for the Corporation’s 60th, to which he added the 60th of his fellow-composer Irwin ‘Bud’ Bazelon: Anniversaries. Like a concerto for orchestra with six tutti sections separated by episodes featuring different sections of the orchestra, this was a fitting climax to the Total Immersion day, deserving it’s fresh outing following – a decade ago – one celebrating Bennett’s own 70th; definitely worth hearing more than once every ten years.

Preceding Anniversaries, the orchestra had been joined by the resplendently assured BBC Symphony Chorus and Allison Bell for my highlight of the day, Bennett’s Spells – in essence a choral symphony, in the style of Rachmaninov’s The Bells. With a text taken from Kathleen Raine’s collection of the same name and commissioned by the Royal Philharmonic Orchestra for the 1975 Three Choirs Festival, it is formed of six ‘spells’ – against sorrow, of safekeeping, to bring lost creatures home (appositely just as the new JK Rowling franchise – Fantastic Beasts and Where to Find Them – is released), of sleep, love and, finally, of creation – and conjures up a world of musical alchemy. Two of the spells are for soprano only and one for a cappella chorus. I caught a whiff of Birtwistle here, particularly in the solo writing (Love Spells shorn in the programme of more than half of Raine’s text, unfortunately), as well as some Britten-esque choral fingerprints. Both in conception and performance this, the most substantial work performed during the day, was the most satisfying.

Gamba – having recorded Bennett’s film music for Chandos – conducted with panache and enthusiasm. More of him and Bennett please. Performances are available on the iPlayer and the websites of the BBC orchestras until Christmas.