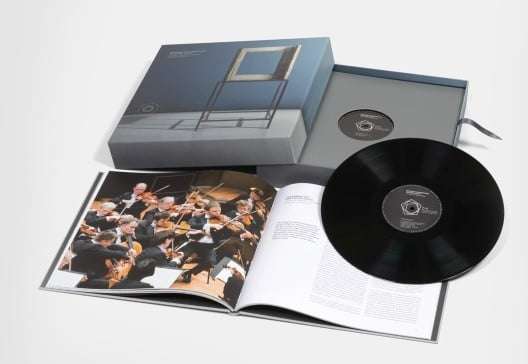 Recorded October 2015 at the Philharmonie, Berlin

Traditionally reviews tend to concentrate on performance with little – if you are lucky – other than a few lines on the engineering. Here we focus on a comparison between the sound of Simon Rattle’s Berlin Philharmonic Beethoven cycle taken from dress rehearsals and concerts recorded on vinyl and a two-channel, 24bit, 192 khz download.

This cycle is Rattle’s second traversal of these Nine Symphonies (following the Vienna Philharmonic in 2003 for EMI) and unfortunately by 2015 he had bought into all of historically-informed performance nonsense that disfigures so many renditions of these supreme masterworks. As the beautifully produced fifty-three-page hardback book informs us: in numbers 1 to 8 he uses forty-seven to fifty-nine players, with small timpani, it is with the Ninth singularly that we have a full Philharmoniker. Rattle also uses the Jonathan Del Mar (who contributes a three-page essay) edition of the scores, observes all the repeats and – thankfully – uses antiphonal violins. Tempos are never extreme, although for all the beauty of the playing, the slow movements of Two and Five are still too fast, as is the Ninth’s Finale, where the soloists are no better than average. Rattle is not afraid to adopt – by modern standards – a leisurely pace in the great Adagios of the ‘Eroica’ and Ninth; nor is he averse to introducing changes of tempo, and there are innumerable instances where the dynamic levels are micro-managed, which makes the line undulate in a highly unusual, sometimes irritating, manner. 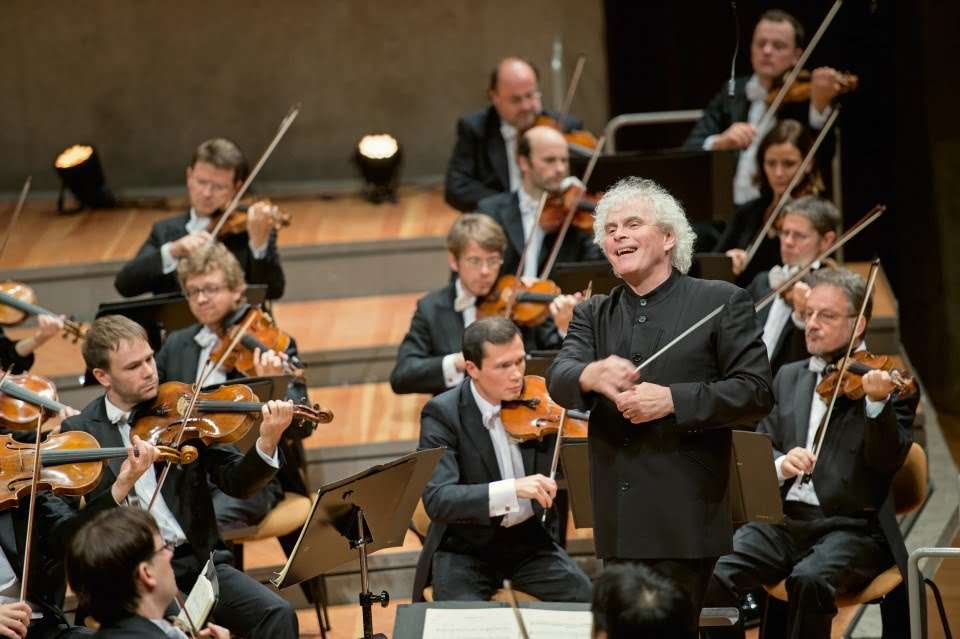 In terms of the general spirit of the performances, nothing really reaches out and grabs. There is nothing like Toscanini and the NBC Symphony Orchestra, live in 1939, nor Mravinsky’s masterly control of tension and driving power in the ‘Eroica’ with the Leningrad Philharmonic. Nothing like Carlos Kleiber and the Vienna Philharmonic giving surely the greatest studio account of the Fifth on disc, nor the Berlin Philharmonic under André Cluytens (mono and stereo versions) singing its heart out in the ‘Pastoral’. But, then again, the last great Beethoven cycles were those by George Szell and Otto Klemperer. Rattle is, however, superior to all of the hopelessly under-powered ‘period’ versions spawned by Roger Norrington and the London Classical Players; which brings us to the sound.

In the UK the London Symphony Orchestra pioneered own-label recordings many years ago, but the Berlin Philharmonic is a comparative newcomer to the field, and its website only lists seven products. Nevertheless, the move into vinyl is a first, and this Beethoven cycle is also offered on CD and Blu-ray and as 24bit, 96 and 192 kHz Flac and WAV 2-channel, or surround-sound Flac downloads. The reason for using a high-res download is straightforward: when speaking to one of world’s greatest recording engineers, he called dead, compressed CDs the digital equivalent of a music-cassette and they are indeed absolutely incapable of reproducing anything so sophisticated as the acoustic signature of a hall or instrumental and vocal timbres, whereas 24/192 – while still some way short of the finest analogue or DSD256 (be it pure or converted DXD) – played without filtering in native format, usually offers a more vibrant image. 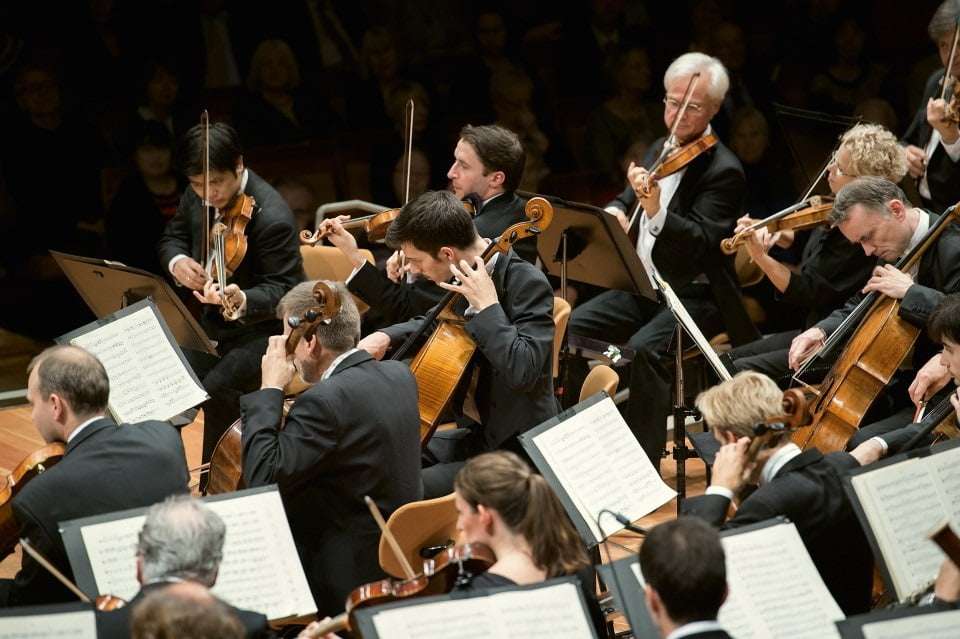 Cost-wise, the download (where the number and type of download is unlimited) is €49.99 and the LP set is €299.99, which comes in a strikingly designed box, whose front boasts one of Isa Genzken’s concrete window sculptures, the aforementioned book and a cloth tab to help lift the LPs out.

With regard to the vinyl, the Philharmoniker had clearly hedged its bets, in that in among the multiple-microphone set-up, a single, centrally placed two-mic stand was used to capture a signal that could be used to create LPs, where the analogue lacquer-cutting head amps are two-channel. It seems that the orchestra then waited to see how well its analogue Brahms cycle sold on LP before taking the expensive step of cutting lacquers and stamping discs. It sold well. To be clear though, the lacquers were cut from 24/192 files as opposed to analogue, two-channel production master-tapes. It is also interesting that only two mics were used, whereas as soon as it became available in the early days of stereo, virtually all of the major studios moved over to three and, later, multi-channel recording, which brought improved internal balancing, imaging and better captured omni-directional bass frequencies, although the microphones and settings used in Berlin have in fairness created a sound-stage with almost all of these attributes.

The Scherzo of the ‘Eroica’ and the whole of the Ninth have been chosen for comparative purposes, because the former’s horn-led Trio exposes any issues around balance, ambience, clarity and definition, while the dynamic-variation in the first movement of the latter, the way in which the timpani are captured in its Scherzo, the string sound in the Adagio and the choral forces in the Finale are going to expose even the slightest fault. 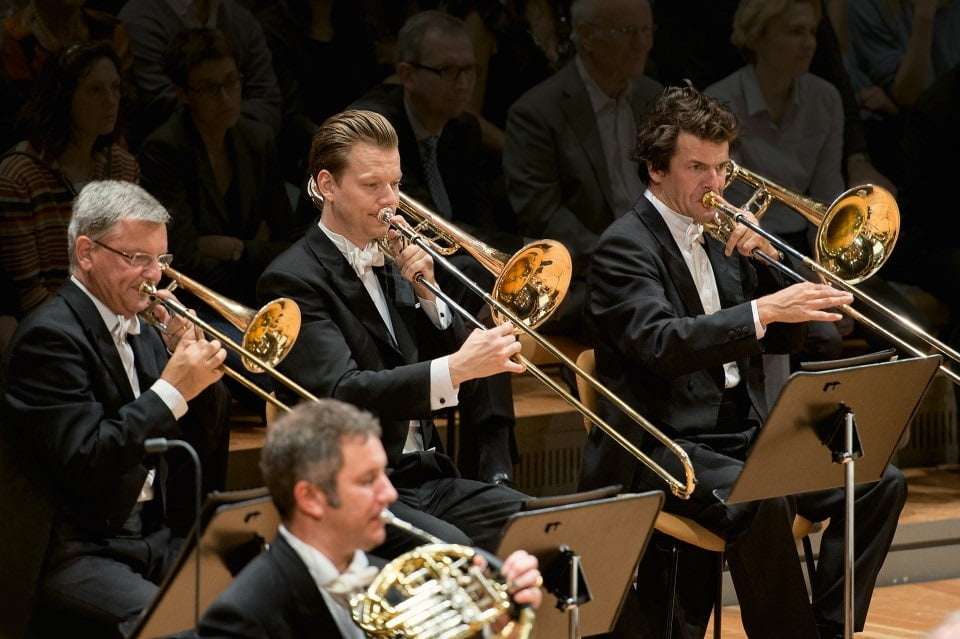 With the download the first thing one notices in the ‘Eroica’ is that the level is quite low, the overall balance slightly recessed, the orchestra has reasonable presence and clarity, and definition is excellent. However, when the horns enter they don’t rasp and seem to hang somewhere upper-left as though they are in a different acoustic, in a way often found on mono and early-stereo discs. Turn to the LP and the level is higher, the balance more forward, the image has greater projection, the horns – and indeed the whole orchestra – much more bite and body, and the dynamic range is exceptional for vinyl (the latter presumably being down to the producers having decided that no side should exceed twenty-five minutes, so the Finale of the Eighth is unusually on the flip-side, although the Finale of the Ninth is also split). Unfortunately, the over-reverberant acoustic of the Philharmonie is even more tangible on disc, and while the woodwinds are audible, on both formats the image depth paradoxically makes them sound distant, which might make you wonder if most of the movement derives from the dress-rehearsal, when the hall would have been empty. Unless I have missed it, throughout the cycle there is absolutely no audience noise in either format and very little change in the acoustic.

When one turns to the Ninth’s first movement pianissimo prologue, the pulsating second violin, cello and horn accompaniment that prefigure the first subject are more vibrantly alive on LP, as is the towering forte unison statement of the theme itself. The second subject is announced by flutes, clarinets, oboes in succession and here again the wonderful tone of the Berlin wind-players is better realised on vinyl, although later, in the development section’s massive climax, the download has greater clarity, if less weight. The Scherzo might be called a concerto for timpani, and on LP one does hear better the hard-sticks hit the skins.

As one might expect in the Adagio, the massed string sound on vinyl is far richer and lifelike, but at the end of the side the mastering team somehow lost the plot, in that there is the first few minutes of the Finale, up to the start of the ‘Ode to Joy’ theme! One can see why this was done: as mentioned, throughout the cycle the dynamic range is extended, the overall level high and as especially towards the end the Finale there are some very loud passages, which create far wider groove widths, and so they were going to struggle to accommodate it on one side, and even if they could, there is always the potential for distortion. A slightly reduced level of the entire performance could have rectified this.

What you then hear is rather bizarre, because on vinyl when Dimitry Ivashchenko enters the acoustic is more reverberant than anywhere else on the set, indeed he could be in a barn, whereas he is reasonably firmly centred on the download and yet there is much less reverberation on the LP. Hearing this you do feel that the recording team should have listened to the magnificent sound a group of Decca luminaries gave Georg Solti, the Chicago Symphony Orchestra and a large chorus (Rattle’s less than half the size) in 1972 to hear what a multi-microphone set-up can produce in the Ninth. Despite this the vinyl better reproduces the timbre of the soloists and choir and yes – as throughout the cycle – the concentrated power of the Berlin Philharmonic. Despite the cost, I would have to say the vinyl is the version to go for.