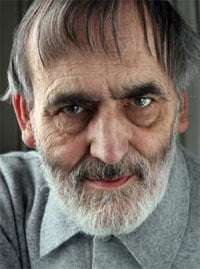 The Helmut Lachenmann retrospective at the Royal College of Music several years ago marked a belated recognition for this most unequivocal of contemporary composers, its momentum furthered during this Southbank Centre Weekend. The two-part chamber recital on the Saturday enclosed a less than scintillating discussion with the composer (born 1935), while the following day’s orchestral concert was preceded by a Mahler-centred debate that promised more of interest than it delivered: far more informative than either was a screening of Bettina Erhardt’s film Šwo ich noch ich war, a portrait of the composer at the 2006 Lucerne Festival in which his humour and willingness to engage in debate with musicians and audiences would have come as no surprise to those who have spent even a limited time in his company: seriousness, rather than earnestness, being central to the man as well as to the music.


Lachenmann’s three string quartets (to date) have emerged at regular junctures, and the Arditti Quartet began proceedings with the first and third of these. Admittedly Gran Torso (1972) is not so designated and has only been referred to as ‘No.1’ as the composer’s deep though always provocative relationship to his Austro-German heritage gradually came into focus. Among its most fascinating aspects is the manner in which its recourse to unorthodox playing techniques, hence the resulting timbral and textural extremes, is fused with a sonata-form dynamic such that the piece evolves almost in spite of itself. Lachenmann has spoken of the need to “feel” rather than merely perceive structure in his music, and this thinking was viscerally to the fore in the latter stages of the present performance – in which the Arditti members did comparable justice to the music’s near-silences as to its explosive apexes.


By comparison, Grido (2001 – its title derived from the initials of the then members of the Arditti Quartet) is appreciably more inclusive in technique and diverse in its expression. For all its temporal fluidity, however, the follow-through – across several interrelated phases rather than independent sections – is not one of even gradual reprise, but one of cumulative intensification. The result is a wide-ranging yet unified span which exudes completeness at every level – keenly dispatched in what was an unfailingly sensitive and assured account by the Arditti Quartet; one in which the interplay between harmonies and harmonics during the initial stages found contrast in the fragmentary episode at its centre, before a sudden gathering of intensity toward what must be Lachenmann’s most translucent culmination and, by the same token, most eventful winding-down into a deep though pulsating silence.

After the discussion the composer himself played, in typically self-effacing but absorbing fashion, Ein Kinderspiel (1980) – seven short and ostensibly simple yet far from naïve pieces that home-in on specific technical procedures as if to make the piano ‘his’ alone. Music, moreover, whose often quizzical allusions to earlier eras evoke a child-like (though not for a moment childish) dimension: would that more aspiring pianists were introduced to these pieces in their formative stages. After this, two other solo instrumental works could easily have seemed mere novelties, and though Oliver Coates effortlessly mastered the extended cello techniques of Pression (1970), Clio Gould rendered those for violin in Toccatina (1986) with a restraint bordering on self-effacement: ‘less is more’ is a viable but hardly inevitable blueprint on which to base one’s interpretation of Lachenmann’s music.

The most important performance, however, was Got Lost (2008). Lachenmann has often spoken of his desire to “take on” the Lieder tradition and did so in a characteristically combative yet imaginative way. The outcome being a 24-minute continuity which draws on lines from Nietzsche’s Der Wanderer as basis for a repertory of vocal and pianistic motifs that undergo ever-changing transformations in a sequence centred upon Fernando Passo’s Todas as cartas de amor são ridículas. A poem that concerns the ridiculousness of love-letters, the eliding between abstraction and concreteness makes the final stage, featuring an anonymous ‘Got Lost – Announcement’ of a laundry basket stolen from a Berlin apartment, more affecting in its fusion of inanity and profundity. Sarah Leonard and Rolf Hind gave their all in a work that takes Lachenmann’s equating of sound and sense to a whole new level.


On the following day, in the Royal Festival Hall, there was a pairing of the composer’s most recent work for full orchestra with one in which he makes explicit his belonging to a constantly evolving tradition. Heard in the context of the weekend overall, Schreiben (2003) left the impression of consolidating existing procedures rather than of breaking new ground. Certainly the subdued though expectant initial stages are much as one might have expected, but not perhaps the visceral immediacy with which the work then effects contrast and culmination – an unabashed revelling in sonority that makes it akin to a ‘concerto for orchestra’, prior to its breathless final dispersal. This, at least, was the impression conveyed by Brad Lubman and an expanded London Sinfonietta in a performance that seemed to cover all the necessary bases admirably, making for a piece that was ‘listener-accessible’ without being wantonly ‘user-friendly’.


After the interval, a second UK outing for Ausklang (1985) – Lachenmann’s largest orchestral work that is neither concerto nor symphony; partaking of both genres so as to create a piece sui generis out of their fusion. Its title derives from the penultimate section of Richard Strauss’s Eine Alpensinfonie – a work whose situation between late-Romanticism and nascent Modernism is paralleled uncannily by pivoting between Modernism and a post-Modernism where many once-radical procedures were atrophying. Taking its departure from the idea of ‘resounding’, the work unfolds over four large sections ¬ approximating to first movement, slow movement, scherzo and finale – and it is the degree to which the material plays on expectations of such archetypes, as when a cadenza is superimposed on the music’s unfolding, which ensures that sense of familiarity from within a new musical context.


Rolf Hind was the formidable soloist, with Lubman securing a dedicated response from the Sinfonietta in music seeking not to tear up the rulebook as to transcend self-imposed rules altogether. Wherever Lachenmann goes next will doubtless be keenly anticipated by those in attendance at this Weekend.