Those of you with long memories will recall that I wrote an extensive article last year about the first Malar International Music Festival. I was enthusiastic about that event, and so wanted to visit the Festival again this year.

Pianist Patrik Jablonski and his colleague Gunnar Dalborg have continued their work in building a festival that seeks to attract new listeners to classical music, and there were a number of highlights this year which were extremely encouraging. I will mention just three of them as an insight into their thinking. 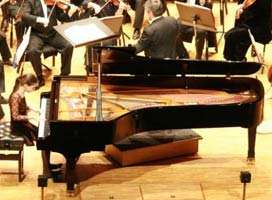 Firstly, we were thrilled by the performance of a 12-year-old Russian pianist, Julia Vanushina. Technically flawless (which seems almost to be par for the course nowadays) it was a joy to hear such musical, unaffected playing in Chopin’s First Piano Concerto. This was not just brittle ‘perfection’, but a thoroughly thought-out and affecting performance of a much loved work. The subsequent standing ovation was well deserved. We will hear more of her!

The second highlight was a new ‘Children’s Opera’. This year, Petra Hallberg and Patrik Jablonski gave two performances of a 45-minute introduction to Gluck’s “Orpheus and Eurydice”. At each, more than 100 children were invited, free, to the Concert Hall and were intimately involved in the drama of the piece. Petra sang some of the wonderful melodies from the opera and the children joined in with dance and movement.

I attended the second performance, and while walking to the hall I was passed by the children from the first, who were all visibly thrilled and excited by their experience! It is encouraging to see that the organisers have been able to expand this activity due to substantial sponsorship from ABB.

Finally, I would like to mention the last concert, which included a large, dramatic work for the percussion ensemble Kroumata by Sven-David Sandström, Lutoslawski’s Paganini Variations played splendidly by Patrik Jablonski (a pleasant change from the ubiquitous Rachmaninov) and finally Saint-Saëns’s Carnival of the Animals, in which Patrik was joined by the Swedish jazz-pianist Bobo Stenson.

Many people were attracted to this concert by the presence of Bobo, and he interpolated some jazz improvisations into the Saint-Saëns that were highly successful and greatly appreciated by the large audience.

Again, I applaud the imagination of the organisers in taking the chance of inviting both Bobo and Kroumata in order to try and broaden the horizons of the audience. The third festival is already being planned…