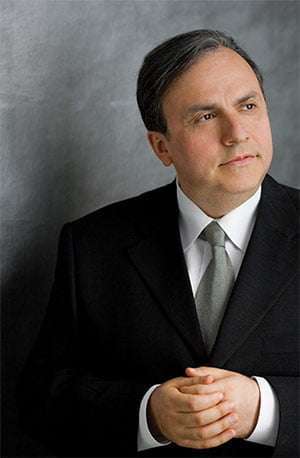 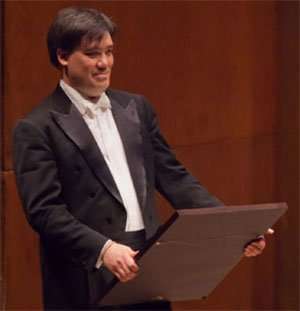 Music Director Alan Gilbert has capped off each of the New York Philharmonic’s last three seasons with a special event, such as spectacularly staged performances of Janáček’s The Cunning Little Vixen, then Stravinsky’s Petrushka and The Fairy’s Kiss. The 2011-2012 season ended with an extraordinary “Philharmonic 360” concert in the Park Avenue Armory’s cavernous 55,000-square-foot Drill Hall, the musicians surrounding the audience for Stockhausen’s Gruppen, the three orchestras finding Magnus Lindberg and Matthias Pintscher joining Gilbert as conductors.

The current season ended with the inaugural “NY Phil Biennial” – eleven days of new-music concerts followed by Beethoven Piano Concertos: A Philharmonic Festival’ with Gilbert conducting and Yefim Bronfman performing the five numbered Piano Concertos. The Triple Concerto marked the end of Glenn Dicterow’s 34 years as the Philharmonic’s concertmaster, including 6,033 concerts and over 200 appearances as a soloist. The festival also concludes Bronfman’s season as the NYP’s artist-in-residence. Bronfman’s long association with the Philharmonic dates back to a performance of the Triple Concerto (with Shlomo Mintz and Yo-Yo Ma, conducted by Alexander Schneider) in 1978, the first of more than a hundred performances with the Orchestra in 62 programs.

Bronfman’s traversal of the Piano Concertos offered insights into Beethoven’s development as a composer, this being most clearly evident in their opening, sonata-form, movements, composed at roughly five-year intervals from one another. The breezy Second in B flat (composed before the C major) owes most to the heritage of Haydn and Mozart, yet Bronfman brought out the harmonic inventiveness and wit already present in the young Beethoven, augmented by the usual if much-later-composed and stylistically more advanced cadenza. Here Bronfman was brilliant, from its fugal beginning and lightning-fast runs to the final trill that surprisingly returns to the tonic, almost reducing the concluding orchestral passage to an afterthought. Although the C major Concerto still shows its Mozartean roots, it takes significant further steps along the path toward the mature Beethoven, beginning with its weightier orchestration, with pairs of clarinets and trumpets as well as timpani added. Bronfman’s playing was largely playful, but also powerful when appropriate, as in the cadenza – the longest and most dramatic of the three composed by Beethoven.

The Third Concerto was composed at what was still a relatively early stage of Beethoven’s career; it was premiered at the same concert as the Second Symphony. The only one of the five Piano Concertos in a minor key, it has a darkly dramatic aura that Bronfman and Gilbert projected admirably. Bronfman showed off his virtuosity in the cadenza (which also was added by Beethoven several years later), following which the orchestra’s return was accomplished with subtlety. The pinnacle of Beethoven’s output in this genre is the Fourth Concerto, which begins, unprecedentedly, with a piano solo. (This unaccompanied entry was somewhat marred by a loud remark by an audience member, freshly returned from intermission, who apparently did not realize that the Concerto had begun!) Bronfman played this brief but vitally important passage with just the right weight, and Gilbert did the same with the orchestra’s quiet response, maintaining a delicate balance between them throughout the Allegro moderato, and giving eloquent voice to its inherent poetry. Here again, Bronfman opted for the longer and more dramatic of Beethoven’s two cadenzas, and played it brilliantly.

The Fifth Concerto (the ‘Emperor’, although not so named by Beethoven) exceeds its predecessors in length and grandeur, but does not measure up to the Fourth in beauty of expression. In the opening Allegro, the piano part is heavier on scales, arpeggios and trills – all played by Bronfman with great virtuosity – than on interesting melodic development. The orchestra, though, is given considerable opportunity to shine, and the Philharmonic was in top form, with the strings and woodwinds creating a quintessentially Beethovenian texture punctuated by horns, trumpets and timpani.

Gilbert and the Philharmonic excelled in each of the slow movements, the strings prominent in setting the mood, whether surging, lush or gentle, providing a backdrop for Bronfman’s delicate touch and deeply expressed emotions. Particularly notable were clarinet solos in the First Concerto’s Largo, as well as contributions from horns in the Second and Third, flute and bassoon in the latter, and flute in the ‘Emperor’. It was, however, the Fourth Concerto that stood out, its Andante con moto having been compared by Liszt to Orpheus taming the beasts – the connection that inspired Cheung’s Lyra. Bronfman responded at first with utter gentility to the strings’ dramatic urgings that impatiently cut him off, the piano finally exploding into a series of trills then softening with rapidly rising and falling scales, and ending with what seemed a dying breath. 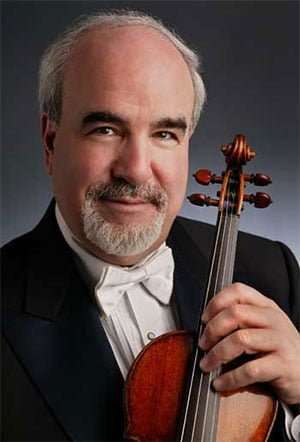 Joy abounded in each of the finales, Gilbert at times all but dancing on the podium. He and Bronfman were particularly effective in the Second Concerto, with its catchy rhythms and Gypsy-like episode, in the fugal passage in the Third, and in communicating Beethoven’s wit in the Fourth and Fifth Concertos – the former jolting us with the trumpets and timpani that had hitherto been silent.

The Triple Concerto, composed about the same time as the ‘Eroica’ Symphony and the ‘Appassionata’ Piano Sonata is less weighty than those works, but abounds in genial tunes, often resembling a ‘piano trio’ to which orchestral interludes and accompaniments have been added. A successful performance requires that the soloists have a keen chamber-music sensibility, which all three amply demonstrated here. The double basses and cellos created a mysterious aura at the work’s outset, and the soloists’ initial turns were sandwiched between expository tutti passages until finally Brey’s cello sang out with the principal theme, a highlight of the performance as was his playing in the Largo – both melodies echoed sweetly by Dicterow’s violin. The pianist is less challenged technically, often playing accompanying scales and arpeggios, yet these contributions, from Bronfman, gave the music a consistently sparkling aura. It seemed appropriate for Dicterow to end his Philharmonic tenure with a work that showed off both virtuosity and musical teamwork, qualities that have been hallmarks of his service as NYP concertmaster. In the Fall he will assume an endowed chair at the University of Southern California’s Thornton School of Music in Los Angeles, the city where he grew up and began his musical career.

Gilbert discussed the new Cheung and Shepherd works with their composers, including these pieces’ connections to Beethoven’s Piano Concertos, but I found it all but impossible to discern any such links during the performances. Both compositions were engaging, however, with the colorful, percussion-dominated soundscape of Sean Shepherd’s Songs being especially appealing. Taking off from the supposed connection between Beethoven’s Fourth Piano Concerto and the lyre of Orpheus, Anthony Cheung’s Lyra begins with a harp playing the G major chord that opens the Beethoven, and later incorporates recorded snippets on a variety of lyre-like instruments as well as allusions to earlier composers’ settings of the Orpheus legend. Shepherd’s Songs, as its title suggests, emphasizes melody, its seven interconnected episodes each suggesting a different locale for a song. Its architecture is palindromic, with the shimmering atmosphere of ‘The Fair’ that opened the work returning in the concluding ‘The Meadow’. Shepherd’s score calls for a large orchestra, but much of the melodic content is supplied by vibraphone, xylophone, harp, piano and celesta, with a huge array of other percussion instruments adding multihued touches.