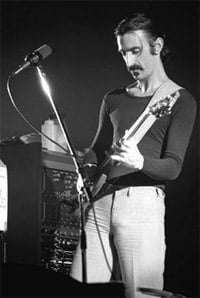 My sixth-form English teacher was fond of saying that of all the divisions that set man apart from man, the only one that mattered was between those who thought that Thomas Hardy was a poet who also wrote novels and those who thought that he was a novelist who also wrote poems. If I recall correctly the teacher was firmly in the former camp. He was of course wrong about that. The only division that matters is between those who think that Frank Zappa was a misogynistic buffoon and those for whom he was one of the great creative artists of the twentieth-century. Since his most untimely death in 1993, Zappa’s stock has risen exponentially in the ‘classical’ world and those of us who have spent a lifetime in the latter camp are witnessing a vindication of their once-derided eccentricity, as his reputation not only lives on as a rock musician but his work is now a regular fixture in the world’s contemporary classical music festivals – George Benjamin programmed a Zappa retrospective at this year’s Ojai Music Festival in California.

It was only a matter of time before the UK caught up and it did so in spectacular fashion with this three-day event promoted by the Roundhouse in partnership with Sky Arts HD (which will broadcast a film of the festival next month). The declared intent was to transform the Roundhouse into “a facsimile of Zappa’s brain”. Corridors were adorned with Zappa album artwork, Roundhouse Radio played him non-stop, computers were loaded with Zappa material, DJs presented Zappa mash-ups as after-show entertainment, films by and about Zappa were screened throughout the day and his wife Gail, son Dweezil and former Zappa associates and band alumni held forth in various ‘audiences with’. Slowly ageing Zappaologists lurked everywhere, in the venue itself and the nearby pubs, in their permanent twin mode of unbridled enthusiasm about what had been included and obsessive nit-picking about what hadn’t (John Adams is wickedly accurate about these guys in his blog, ‘Hellmouth’). A healthy influx of the young and curious provided a welcome leavening, particularly on the Saturday.

The main fixtures were a performance by Dweezil’s Zappa Plays Zappa band flanked by classical ensembles performing orchestral and chamber works by his father together with compositions by his lifelong hero Varèse (whose splendidly combative rallying-cry “The present-day composer refuses to die!” is emblazoned on many of Zappa’s album covers) and Boulez, with whom Zappa collaborated on The Perfect Stranger album in the early 1980s.

The Friday concert featured the London Contemporary Orchestra performing selections from The Yellow Shark project which Zappa wrote for Ensemble Modern shortly before his death. Advance publicity had promised the whole thing but we got around three-quarters of what is on the 1993 album, which is itself around three-quarters of what was written for the original event (some disapproving stroking of Zappaologist goatees was in evidence). The members of LCO – a first-time encounter for me and most definitely a major new force to be reckoned with – threw themselves into this challenging music with an enthusiasm and verve that was a joy to hear and was exactly what these teeming scores require. A few raw notes and ragged ensemble in the opening ‘Dog Breath/Uncle Meat’ medley were quickly forgotten when the melancholic ‘Outrage at Valdez’ that followed and later the mesmeric ‘Get Whitey’ (surely one of Zappa’s most beautiful compositions) were dispatched with such intensity. The glistening curlicues and tendrils of the Boulez homage ‘The Girl in the Magnesium Dress’ were quite overwhelming in their cumulative effect. Gentle amplification brought out the inner workings of the wind and string quintet segments, including a blistering ‘Questi Cazzi di Piccione’ which easily trumped Ensemble Modern’s version in its sheer unreasonableness. The committed direction of LCO artistic director and principal conductor Hugh Brunt drew dynamic performances throughout from the mainly young players and the closing ‘G-Spot Tornado’ brought the house down, as intended.

Table seating added to the relaxed but attentive atmosphere, something that I would be pleased to see more of. It was a pity however that the air-conditioning made its presence felt in the more exposed passages.

The LCO had given a slightly hesitant performance of Varèse’s iconoclastic Intégrales, preceded by an apparently nervous or overwhelmed Gail Zappa bestowing her blessing on the weekend. For opener, the Roundhouse Music Collective – a group of young musicians formed last year under one of the Roundhouse’s enlightened outreach projects – presented a boldly abstract suite of compositions and improvisations loosely based on Zappa’s music and its influences. It shone a particular light on those Zappa compositions that have a gnarly be-bop flavour, most obviously ‘Be-Bop Tango’ (brilliantly rendered by LCO later) but also the ‘Eric Dolphy Memorial Barbecue’ and the little-known gem ‘Kung Fu’. The composition and arrangements were credited to Leon Mitchener, whose name I shall look out for, and all credit to the Collective for not taking the easy route for a concert opener.

Despite being a highly talented composer and guitarist in his own right, Dweezil Zappa has in the last few years nobly put his own career on indefinite hold while he tours the world with his Zappa Plays Zappa band. Since Frank was mind-boggingly prolific, ZPZ has no difficulty in avoiding repetition but its concert here was a one-off in any event, specially tailored to display all facets of Frank’s writing. The centrepiece was a complete performance of the Apostrophe album in the exact same sequence and using the exact same arrangements. Slavish obeisance was however avoided by a convention of having the solos orbit in the same general climate as the solos on the album but with (after a few literal quotations) a specificity of their own.

The downside of the literal approach was the omission of the virtuosic ‘Rollo’ finale to the ‘Yellow Snow’ sequence, which whilst logically correct because it isn’t on the album, nevertheless left a conspicuous gap since Frank’s own performances (subsequently released) always included it. Apart from that caveat (more goatee-stroking) this was a huge success. The dazzling unison line that races through ‘St. Alphonso’s Pancake Breakfast’ had to be heard to be believed. I doubt even Zappa’s own bands could have pulled that off so accurately.

An innovative feature of the concert was the sporadic use of projections of Frank singing and soloing (I can’t improve on Dweezil’s description of his “idiosyncratic mixolydian flurries”) with the rest of the recordings peeled off and the ZPZ band supplying live accompaniment. The technology worked seamlessly and at one point we had the moving spectacle of Dweezil soloing while Frank, in a haze of cigarette smoke, appeared to be concentrating on Dweezil’s solo and nodding sagely in approval.

Other highlights included Dweezil’s enticingly Bulgarian solo in ‘Cruising for Burgers’, a stunning ‘RDNZL’ with the whole band on fire, note-perfect renditions of dense and complex songs such as ‘Inca Roads’ and ‘Montana’, the appearance of an unrecognisable Scott Thunes, the stalwart bass player in Zappa’s bands of the 1980s and an encore sequence featuring the exquisite instrumental ‘I Promise Not to Come in Your Mouth’ and an appearance by Frank’s daughter Moon Unit reprising her celebrated performance of ‘Valley Girl’.

Brief support was provided by the Mighty Boosh Band from the cult BBC television and radio series. Zappaesque by dint of their surrealism rather than musical content, Mighty Boosh was an effective opener and may have contributed to the capacity audience. Sadly a promised enactment of part of the Royal Albert Hall obscenity trial failed to materialise.

The first half of the final concert of the weekend, given by the London Sinfonietta under the relaxed but authoritative Nicholas Collon, seemed positively decorous after that. Revised Music for Low Budget Orchestra was disappointingly soft-edged compared to Zappa’s recording, although I think this was a problem with Ali Askin’s orchestral arrangement as much as the performance.

(A parenthesis on performing editions of Zappa’s early orchestral scores, which have textual complications that make Bruckner symphonies seem a model of clear authorship. Neither of the works featured in this concert were published by Zappa in the form of printed scores. Ensemble Modern commissioned Ali Askin, who had worked with Zappa on The Yellow Shark project, to notate an orchestral score for both pieces, drawing on available Zappa manuscripts – themselves a patchwork of instrumental modules from material performed by the 70/71 and 73/74 iterations of Zappa’s band – and filling in the gaps by aural analysis of the recordings. Askin undoubtedly did a great job but some of his instrumental choices lack the incisiveness of the Zappa originals.)

Boulez’s Mémoriale for flute and ensemble (which from my position at the front of the circle was more like a concerto for air-conditioning unit with flute obbligato) was beautifully realised by Michael Cox with string halos hovering on the threshold of audibility.

It took a gripping performance of Varèse’s Octandre to introduce an element of drama into the concert. As always when I listen to Varèse, I experienced the aural illusion of hearing what sounded like the influence of Zappa on Varèse’s compositional manner.

The excitement level however really ramped up after the interval, when Zappa’s early 70s masterwork The Adventures of Greggery Peccary was given its UK premiere. The stirring tale of a wild pig that invents the calendar and is pursued by ‘henchmen’ for his troubles is the repository for some of the most brilliant sequences of music Zappa ever penned. These include the ‘steno pool’ episode with its clattering notated typewriters à la Satie and complex vocal harmonies (gamely rendered by the three LS typewriter performers), the breathtaking chase sequence with its impossible brass writing and the irresistible ‘brown clouds’ motif that achieves its apotheosis in the blazing coda. The vocal parts were taken by Tim Dickinson (Greggery) and Mitch Benn (Narrator and everything else). Benn delivered and juggled his parts with aplomb and Dickinson was a touchingly upbeat Greggery. The London Sinfonietta handled the turn-on-a-dime cartoon gear-changes with virtuosic ease. Having evidently spent a great deal of rehearsal-time perfecting this realisation, I do hope the LS will keep the work in its repertory. The audience went wild and the last segment was encored; a great way to end the festival. A projection of Frank’s face hung over the concert – knowing, sardonic, bemused – the man himself simultaneously absent from the proceedings and yet everywhere.

Dweezil intimated that the Zappa Family Trust hope to make this an annual event. They should not hesitate. Meanwhile there is still one more concert to go in this year’s event. On Saturday 13 November the Royal Academy of Music’s Manson Ensemble is performing a mixture of Zappa originals and arrangements by Phillip Cashian and RAM students. You should go.