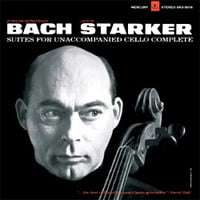 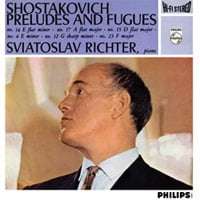 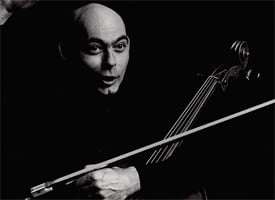 These Speakers Corner LPs have certain similarities: recorded between 1963 and 1965, when both oeuvres were little-known, other than to cognoscenti – and Shostakovich’s Preludes and Fugues are an homage to Bach. Both feature Eastern European artists of the same generation (Richter born in 1915, Starker in 1924) neither of whom were conventional virtuosi. Sviatoslav Richter’s solitary, introspection was legendary and Hungarian-American János Starker has (he is still alive, as of October 2011) little interest in self-promotion or aggrandisement, considering teaching to be just as important as concert-giving – but there the similarities end. Richter never made a complete recording of the Preludes and Fugues, and, after 1963, they did not feature much in his concert programmes, until he returned to some of them in the 1970s and 1980s. He did however (in 1954) record No.4 for Supraphon (014588, a 7-inch 45rpm disc) and, two years later (for the same company), five of them (LPM 288,10-inch disc). Starker, however, recorded four of Bach’s Cello Suites in the early 1950s for Nixa, and between 1956 and 1992, four complete cycles, for Columbia, Mercury, Seffel and RCA. The artists’ performing styles are also very different: Richter highly subjective, Starker conveying a sense of Olympian detachment. 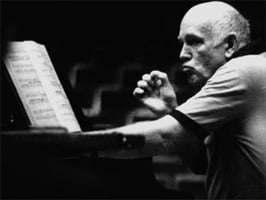 With regard to the Shostakovich, the catalogue has long been dominated by Tatiana Nikolayeva’s recordings. But it is pointless comparing Richter with her or anyone else, because his performances are – in the best sense of the word – unique. In every bar there is an extraordinary sense of concentration, where the sound of each note seems to have been carefully crafted. The range of dynamic and tonal shading is exceptional, rubato completely natural. Richter takes the Prelude of the E flat minor at the marked Adagio, the ostinato bass – after a very emphatic opening – rises and falls, with subtle use of the pedals and the transition to the Fugue (which is taken molto moderato, as opposed to the marked Allegro non troppo) is seamless, while the angular power of the D flat is totally uncompromising. One will probably never hear the Prelude to No.4 taken so slowly or so beautifully voiced and few pianists would dare to reverse the tempo markings of Andante and Adagio. The only major regret is that Richter did not record the complete cycle.

Philips used the term Hi-Fi Stereo to describe its early catalogue, but few audiophiles would rank even their best discs with Mercury, Decca, Columbia, or the finest of the HMV catalogue. Originals (SAL 3458) do not fetch huge prices, but they are not easy to come by. Speakers Corner has done a reasonable job with the transfer. The bass in particular is very sonorous and imposing, the mid-range has excellent presence, and the treble is full-bodied. However, compared with the Universo reissue (6580 084), the sound lacks sparkle and life. One can only assume that too much filtering has been used, and/or the tape was compromised.

In terms of price and collectability the Starker discs are in a different league. The originals were made iby the celebrated Mercury Living Presence label, which some rank alongside Decca for quality of sound. Collectors usually go for the 3-LP boxed set (SR3-9016), a choice of the standard maroon or gold promotional labels (which fetch between £500 and £2,000 at auction) and are – needless to say – rare. The set was re-issued on the Mercury Golden Imports label and then remastered by Philips (who owned Mercury) and compressed onto two discs. These, and especially the latter, are – according to received opinion – of inferior sound quality, so enter Speakers Corner, re-pressing its 2004 transfer.

The First Suite’s ‘Praeludium’ emerges from the loudspeakers with startling presence and realism, and there is a sense of reverberant acoustic and space around the sound, which makes any SACD crude by comparison. Each register is controlled, with no spurious bass echo and an exceptionally full treble, which allows one to appreciate Starker’s masterly control of variable vibrato and almost complete absence of finger noise. The Second and Fifth Suites were recorded earlier, and the cello sound is far larger and very different – most of this is down to Starker having changed cellos in 1965, from the huge ‘Lord Aylesford’ Stradivarius to a more conventionally sized Goffriller instrument – and there is less reverberation. By any standards this is marvellous sound.

In the superb eight-page booklet (LP size!) Starker writes about Bach and the difference between performing in the concert hall and recording studio. He says that “on stage minor technical mishaps are of little significance. Personality, communicative power and convincing artistry take precedence. On a record repeated hearing magnifies shortcomings, technical and musical.” After listening to the Suites in one sitting, I can only say that by the cellist’s own standards these sound like live performances, without any shortcomings. The technical mastery is absolute (the Fourth Suite was recorded in one take), there is sweep, power and a frightening intensity of expression that is exhilarating and ultimately profoundly moving. Like all great Bach-players Starker effortlessly conveys an underlying sense of timeless logic and, to use a word that seems to have gone out of fashion: spirituality. As you would expect and hope for, each of Starker’s complete recordings of the Suites has differing points of emphasis, but this Speakers Corner/Mercury set is one of the few that deserves, and stands, comparison with Pablo Casals. Yes you can buy them on CD for considerably less, but the sound on these LPs is immeasurably superior.