It is good to be in Lahti in September. For those who love Sibelius arrival in Lahti allows an entry into a sort of paradise, one where the human spirit assumes an enhanced state of mind, receptive to the special sounds conjured up by the Finnish master.

Much has been mentioned about Sibelius’s unique relationship with his natural surroundings, his ability to express in music an experience of Finland’s varying climate, ranging from the heat of the summer months to the seeming frozen wastes of a Nordic winter. Many listeners of Sibelius will never divorce their love of the music with the pictorial images of Finland’s weather. So be it.

My own response to this music stubbornly resists pictorial images. Any mention of snow, ice or frozen wastes seems to be of absolutely no consequence to an abiding fascination with the music itself. The opportunity to hear the cycle of seven symphonies surely allows an immersion into Sibelius’s interior world, one created by his early upbringing without a father, reared with musical siblings, which resulted in the gradual emergence of a special genius through hard graft in the medium of chamber music.

Sibelius’s youth is characterised by wild flights of fancy, a determination to be a violin virtuoso and a desire to be a composer of consequence in a small, narrow community that he inhabited in Helsinki. It was his friendship with his contemporary musician, Busoni, which focused his determination to develop beyond his Finnish confines. Busoni was light years ahead of Sibelius in musical development and skill when they first met at the Helsinki Institute of Music. Sibelius was a student; Busoni was on the faculty as a professor. An enduring friendship began that lasted until Busoni’s death in 1924. This early friendship created a springboard for Sibelius to enter the wider world of European music through studies in Berlin and Vienna.

At the end of this study period, in 1892, came the most extraordinary change to any composer’s outlook and ambition. A composing career solely based on chamber and instrumental music moved to one focused on writing for the orchestra. Only one substantial chamber work, the string quartet Voces intimae followed many years later in 1909.

It was Sibelius’s discovery of the potent stories in the Finnish national epic, The Kalevala, which illuminated his mind towards poetic description through music. The series of tone and symphonic poems that he wrote between the Kullervo symphonic poem (as described in the score, 1892) and the tone poem, Tapiola (1926), are testimony to a heightened imagination expressed through a developing musical syntax. These works alone place Sibelius at the forefront of illustrative composers.

Sibelius’s peculiar genius allowed him simultaneously to embark and complete a series of seven abstract symphonies, freed of any Kalevala/mystic associations. Modern scholarship shows that many of these works did indeed begin life with a programmatic influence; hence symphonies 1, 2, 3 and 4 all had this background but, in each instance, such stimuli were quickly discarded in favour of a quest towards symphonic compression and cohesion within structures that eventually became indivisible. At the end of the cycle, in Symphony 7, the mainstay of the symphony since Haydn (a work in separate movements to illustrate different moods and tempos) was replaced by a single movement of great complexity where different sections blended into each other in a seamless fashion.

How did Sibelius achieve this extraordinary odyssey, from the Slavic romanticism of Symphony 1, written in the traditional four movements, to the final symphony’s quest for cohesion and organic unity between the different elements?

The annual festival at Lahti, this year performing the seven symphonies in order of composition, allowed considerable thought to be given to this question.

The festival was played by the now world-famous Lahti Symphony Orchestra through Osmo Vänskä’s tenure, under its new conductor, Okko Kamu. The Finnish conductor won the first International Herbert von Karajan Conductor’s Competition in 1969 and proceeded to record symphonies 1, 2 and 3 for Deutsche Grammophon. Expectations were high for the first concert and indeed Symphony 1 displayed the familiar virtues of this orchestra and a keen awareness of the Sibelian idiom from Kamu. This was a fresh, invigorating, not too fast and an utterly unsentimental rendition that enhanced the stature of a work that can sound derivative and overtly romantic.

It was a good opening but completely failed to prepare for the performance that followed. Put simply Symphony 2 received a resplendent and magnificent interpretation, the finest this writer has ever heard. It held a mirror up to our human condition where anxiety, instability and despair seem to rule our daily lives, at the very least through the news media. These conditions lie latent in this score and are generally passed over in most performances. A study of the biographical period of composition shows Sibelius experiencing all these feelings himself resulting in a (near-) nervous breakdown while sketching the work in Italy. On this occasion the question arose as to why this work is so popular. To which there is probably no answer except to say Sibelius faces down his demons and provides one of the most magnificent examples in all music of the human spirit overcoming adversity.

Judging subsequent symphonies against the extreme rhetoric heard in the Second is not only hard but largely unnecessary. Sibelius moved away from displays of overt emotion towards a cooler, more classical approach where to quote from his conversation with Gustav Mahler – soon after Symphony 3 received its premiere – he stated that he “admired the profound logic that created an inner connection between all the motives.” To repeat the oft-mentioned transitional nature of Symphony 3 does it scant justice. Surely this work has originality in its own right; Sibelius created a symphony that looked back to a Haydn-like use of form in the first movement, and forward in a finale where integration of contrasting motifs sets up a new model for future symphonic thought, both for himself and others. Kamu’s approach was almost to perfection with well-judged tempos (not overly hasty although the middle movement could have been a notch or two slower). The sense of religious overtones was incorporated by giving the various chorales their full due not least at the very end when emotions, gathered up from earlier, were released in the joyous coda of truly epic proportions. 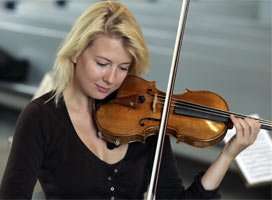 Sibelius’s Violin Concerto is popular probably because it largely avoids the angst heard in the symphonies. Instead what Sibelius imbues throughout is a sense of sexual tension which is released through his peculiar gift for following a highly potent moment with post-coital repose. This effect is well used in the three orchestral interludes in the first movement. The soloist on this occasion, Elina Vähälä, a young lady with an iconic Finnish appearance, has the fierce task of balancing extreme demands for virtuosity with moments of idyllic, dream-like repose. There was some grumbling about over-use of vibrato but my sense was of a superbly judged view where the love poetry at the heart of the concerto was well stated. Nor can there be any complaints of a lack of technique; most of the notes were played in tune unlike some others I have heard.

If Symphony 3 concerns shadows, Symphony 4 is about utter darkness. If that sounds an impossibility, it is to most mortals, but Sibelius has this ability to make, what in other’s hands is pure tribulation, a moment of supreme self-reflection leading to a greater degree of our own self-awareness. When asked why he loved Sibelius, Sir Colin Davis replied “Look in the mirror”. Symphony 4 is a supreme example of this and why many people rate the work as the best of all in his output. For those lacking self-awareness and -reflection the music’s grandeur passes them by. It becomes merely “dismal and doleful”, as an American critic called it. Even then such thoughts could hardly apply to this performance under Kamu whose grip on the work was as strong as I have ever heard. He adopted tempos that were compatible with his playing the first and second and the third and fourth movements without a break – they are each joined by the same note. An expansive first movement of ominous gloom and swirling tensions was followed by a scherzo that literally deteriorated before our ears. The slow movement crowned the whole work by careful attention to dynamics and details, the evolving theme appearing and disappearing in a thoroughly disconcerting fashion. The climax, short but really strong, was a cathartic moment. The best was saved for last in that the finale produced emotions that combined bewilderment with sheer belief in the power of another dimension to our own. Taking risks galore Kamu ended the hero of the night; he guided us through the trepidations contained in this work so as to allow a final feeling of ultimate relief that the world had not come to an end, merely a pause.


Symphony 5 bought forth the most radical interpretation of all. Kamu’s daringly broad opening tempo allowed numerous small details in the orchestration to be heard, producing an effect of a truly modernist work in both form (structure) and content (the mechanism of sound). Thereafter the transition to a faster tempo was gradual acceleration towards an eruptive coda of great excitement. Kamu’s gift is to subtly vary the perceived speed in the music, thereby allowing suspense to reign over otherwise fairy ordinary passages. It has to be said that his view of this work, spacious at times, hectic at others, produced the only poor performance by the Lahti Orchestra. The brass could not cope with the long-held notes demanded, sounding ill-at-ease and sometimes downright awkward.

If the finale’s wonderful ‘Swan Hymn’ failed to make its transcendental mark, the performances of Symphonies 6 and 7 eclipsed earlier disappointment. Both were of world-class stature in execution and interpretation. In Lahti everyone did full justice to this most ethereal work in the entire symphonic repertoire. Following this elevated end with the darker sounds of the opening of Symphony 7 somehow produced a sense of profound unease. By the end of this extraordinary work such was fully justified. In the last five minutes images of the ageing composer, drinking heavily, battling with his demons, uncertain of his future musical development, came to the forefront in the musical argument. The effect was dramatic. Kamu released a torrent of sustained angst to such an extent that we were rendered unable to respond at the end. A terrible quiet followed.


Could Sibelius possibly see the way forward after the tribulations metered out in this work? Ultimately he failed. Symphony 8 was finished then burnt years later. An act of cowardice or of heroism? Few other composers did any such thing. Mahler would surely have completed his Tenth Symphony if he had lived and wanted it performed. The content of Sibelius’s concluding symphony, the Seventh, gives a clue. Could any composer produce a work with such potency and escape unscathed? The answer appears to be No. The rest, in symphonic terms, was silence.