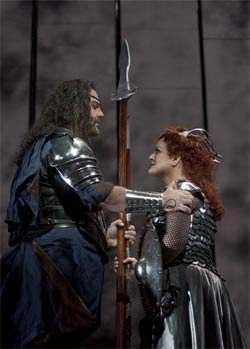 On the final day of its 2010-11 season, the Metropolitan Opera broadcast world-wide in HD its new production of Die Walküre, the second instalment of Robert Lepage’s high-technology take on Wagner’s ‘Ring’ cycle that is to be completed next season. Before the performance could begin, however, a problem with the gigantic, computer-driven ‘machine’ that serves as the set for the entire cycle had to be solved, delaying the start of the opera for some 45 minutes. During the first interval, the HD audience was given a detailed and fascinating explanation of the problem and its solution by the Met’s technical director, John Sellars.

Although James Levine, the Met’s music director, has sharply curtailed his conducting duties for reasons of health, Die Walküre is one of only two operas that he kept on his Spring schedule (Berg’s Wozzeck was the other), and he brought undiminished energy to the task, evoking from the orchestra a performance rich both in sweeping grandeur and in fine detail. The cast was equally brilliant, with Deborah Voigt shining in her first run as Brünnhilde, and Bryn Terfel giving an even more powerful and sensitive characterisation of Wotan than his portrayal in Das Rheingold earlier this season.

Terfel’s every note and gesture conveyed Wotan’s seething anger – at Fricka for not allowing him to aid Siegmund, at Hunding for his abuse of both of the Volsung twins, at Brünnhilde for her disobedience, and at the Valkyries for protecting Brünnhilde – and then became poignant and tender as he bade farewell to his beloved daughter. Voigt was a youthful and energetic Brünnhilde, hitting exuberant high notes with assurance and evoking sympathy with her dismay at the severity of her punishment. 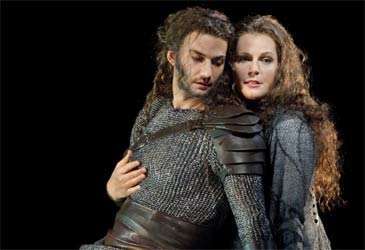 As Siegmund and Sieglinde, Jonas Kaufmann and Eva-Maria Westbroek sang superbly, with beauty and accuracy of tone. Being attractive in appearance and of equal and appropriate age, they also matched perfectly how we might imagine the twins whose coupling sets in motion the plot not only of this opera but also the two that follow it. Kauffmann’s youthful and heroic appearance was a particularly welcome change from the often over-sized or over-aged Siegmunds that had been cast at the Met in recent years, however well they may have sung.

Stephanie Blythe’s commanding portrayal of Fricka took up where she left off last Fall in Das Rheingold. The imperious goddess’s confrontation with Wotan was gripping, her unwavering commitment to principle compelling her husband’s acquiescence, with Terfel conveying effectively the god’s pain as he reluctantly accedes to her demands. Hans-Peter König’s rich, pitch-perfect bass and stern demeanour made a chilling and menacing Hunding. The octet of Valkyries also excelled, and their singing of Wagner’s eight individual vocal lines (without some doublings used in the previous Met production) came through especially clearly in the HD venue.

During the opera’s brief opening ‘storm’, the ‘machine’ went into action. Its 24 planks at first bore projections evoking the icy, wind-swept tempest that raged in the orchestra, then tilted, separating to become trees in a forest through which Siegmund is seen being pursued by Hunding’s kinsmen. Finally, the planks rotated forward to become the sloping roof of Hunding’s house, with the two central planks remaining upright and, via projection, becoming the ash-tree with the sword set between them, waiting to be discovered by Siegmund. This dramatic portrayal of the action being depicted in Wagner’s score was quite effective, and Lepage used this idea again later in the opera during two extended monologues that challenge the stage director to create visual interest. As Siegmund relates his life story to Sieglinde, shadowy projections on the roof show the events of which he sings, and in Wotan’s extended monologue in Act Two, Lepage used a sequence of projections in the shape of a circle to represent Wotan’s lost eye and his shield, and then to illustrate his retelling of the entire plot of Das Rheingold. 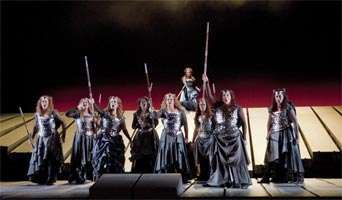 Lepage began and ended the final Act with manoeuvres of the ‘machine. As the orchestra accompanies their ‘Ride’, the eight Valkyries, reins in hand, sit astride as many planks, which rock up and down to simulate galloping steeds. This ingenious high-tech effect was more amusing than realistic, but was a considerable improvement over most stagings in which there are no horses at all to be seen. (It could not, however, top a staging that I had the pleasure of seeing in Seattle some years ago, in which the Valkyries sat astride carousel horses that flew high above the stage suspended on wires – an effect that alone was worth the price of my ticket!). In the final scene, the planks rotate to give the audience a birds-eye view of the sleeping Brünnhilde (actually a body-double for Voigt), suspended upside-down and surrounded by fiery red projections. This, together with the magnificent ‘Magic Fire’ music, brought the opera to a touching close, although I did miss the realistic fire and smoke of the Met’s just-retired Otto Schenk production.

As in Lepage’s production of Das Rheingold, virtually all of the action had to be set in the relatively narrow area of the stage in front of the ‘machine’. That constraint brought the singers closer to the audience, but also made the staging more static and less interesting, deficits only partially compensated for by the beauty of the projections and lighting effects created by lighting designer Étienne Boucher and video image artist Boris Firquet. HD viewers also benefited from the multiple camera angles, close-ups, and reaction shots that were directed for TV by Gary Halvorson. Thus, although Lepage’s staging of Wotan’s confrontation with Fricka was quite dull – she was seated or standing directly in front of her ram-drawn cart through the entire scene – Halvorson created some memorable images, including one with Wotan and his spear in close-up in the foreground, with the seated and stern-faced Fricka looming above him. François St-Aubin’s costumes were rather more pleasing than those in Das Rheingold, with Wotan’s eye-patch being a distinct improvement over having his hair hang down across half of his face as in the earlier opera.

Seeing the performers’ facial expressions, both as they sang and as they reacted to the other characters, added a marvellous dimension to the HD experience, but it also made some production glitches more visible to HD viewers than to most of the audience in the Opera House. For example, whenever one of the performers stood in front of the ash tree in Hunding’s house, the projected image of the tree’s bark was cast upon the performer instead, making part of the “tree” look like the bare plank it actually was.

This continuation of the Ring remains on the path on which Lepage set out in Das Rheingold – a straightforward telling of Wagner’s epic tale without imposing any external ‘concept’ upon it. Although the staging was somewhat less interesting than in Rheingold, all of the singers in this performance of Die Walküre were superlative. Siegfried and Götterdämmerung will offer many more opportunities for creative use of the ‘machine’, as well as for great music making, so the ultimate assessment of this Ring must await its completion in the spring of 2012.