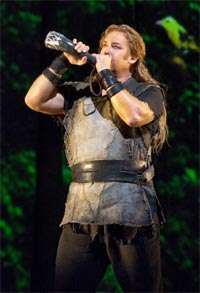 Wagner
Siegfried – Opera in three acts to a libretto by the composer [Second Day of Der Ring des Nibelungen; sung in German with English Met Titles] 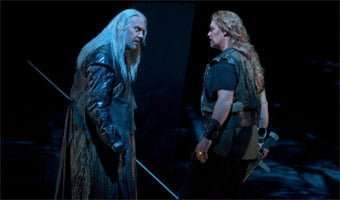 Siegfried may be the most difficult of Wagner’s ‘Ring’ operas to bring off – the title role is stupendously difficult to sing (and hence to cast) and there is not much real action to stage. On this occasion, however, the necessary elements were in place for a solidly successful performance, highlighted by the sensitive conducting of the Met’s new Principal Conductor, Fabio Luisi, who took over this assignment from the still-recuperating James Levine, and also the winning Siegfried of American tenor Jay Hunter Morris, who was to have understudied the part, but was thrust into the title role just days before the production’s October 27 premiere. Morris has now been engaged for the entire Met runs of both Siegfried and Götterdämmerung this season.

The balance of the excellent cast were (with one exception) returning to their roles from previous installments of this ‘Ring’. Bryn Terfel as the Wanderer, the aging Wotan’s alter ego, brought marvelous vocal and dramatic power to the role, which he is singing for the first time in this production. The portrayals of the two feuding Nibelung brothers – Gerhard Siegel as the scheming Mime and Eric Owens as the vindictive Alberich – were powerfully gripping, Deborah Voigt brought terrific dramatic presence to the newly-mortal Brünnhilde, Hans-Peter König was a suitably stentorian Fafner, and Patricia Bardon again excelled as Erda. A newcomer to the cast was Mojca Erdmann as the Wood-Bird, who sang beautifully as her character was represented visually by an animated figure projected onto the set. 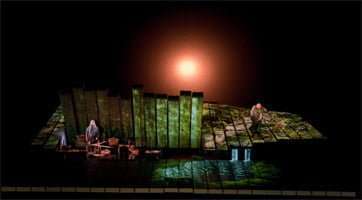 In this third installment of Robert Lepage’s ‘Ring’ at the Metropolitan Opera, the massive ‘machine’, designed by Carl Fillion, that serves as the set for the entire cycle provides many striking images and effects, aided by Pedro Pires’s video images and other electronic wizardry and high-tech stagecraft.

Each Act begins with a series of transformations of the twenty-four huge planks that comprise the ‘machine’, in order to set the mood and define the setting of the action that will follow. Act One begins with an animated projection depicting snakes or worms slithering underground among tree roots, after which the planks rotate to become the trees of the forest, through which Siegfried, as a child, is chased by Mime. A further transformation creates Mime’s hut, alongside which water cascades into a stream in which Siegfried later observes his reflection – a brilliant computer-generated effect. Other special effects in this act were less successful: the bear was gone after just a few seconds and was never fully visible; the burst of steam when Siegfried dips his sword into the stream during the forging scene was unrealistic, and the forge itself unimpressive; and a few sparks at the act’s climactic moment were a meagre substitute for an anvil split in two.

Another transformation from under- to above-ground also sets the scene of Act Two – the lush forest adjoining the cave where the giant Fafner, in the form of a dragon, guards the much-coveted gold. Computer-generated images of the Wood-Bird, electronically synchronised to the text, added an element of realism, but the balloon-like representation of Fafner was much inferior to Alberich’s transformation into a dragon in Das Rheingold and was anything but terrifying. Better was Lepage’s staging (and König’s depiction) of the mortally wounded and bewildered Fafner, who emerges from his cave in his original form as a giant and expires after berating Siegfried and warning him of the perils ahead. 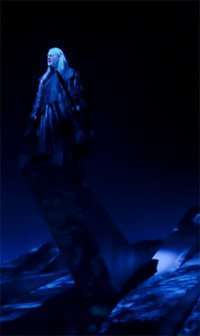 Act Three opens with a projected image of a moonlit lake on which concentric circles ripple outward from the Wanderer’s touch as his two ravens and then the Wood-Bird fly across. The planks transform into a rugged, barren hillside where he wakens the slumbering Erda. In an interesting bit of stagecraft, Wotan’s spear is revealed to consist mainly of a long scroll on which his treaties are inscribed, and when the God unrolls it on the ground, the spear is reduced to a slender reed that is readily broken by Siegfried’s sword. As the young hero ascends to find his bride, the planks glow with the flickering magic fire with which Wotan surrounded the sleeping Brünnhilde at the end of Die Walküre. 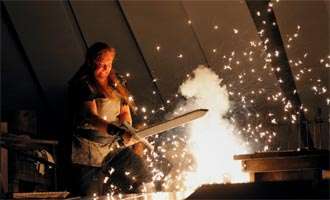 Jay Hunter Morris spent four years preparing to sing Siegfried, as he explained in an interview screened for the HD audience, finally getting to perform the role when tenors for whom he was covering withdrew – first Ian Storey this summer at San Francisco Opera and now Gary Lehman at the Met. By this performance, the third and last in the current run (there will be three more in complete ‘Ring’ cycles next spring), he fit into the production as smoothly as if he had been slated for the role all along, portraying the young hero with convincing naïveté and good comedic timing, especially in his interactions with the animated Wood-Bird. I would have wished for a bit more power in the final measures of Act One, but Morris was probably wise to reserve enough energy so that in the opera’s final scene – the extended, ecstatic love duet with Brünnhilde in which many a Siegfried has run out of steam – his stamina held up well enough for him to hold his own opposite Deborah Voigt, who appears only in that climactic scene. Voigt began her performance auspiciously, both dramatically and musically, teaming with Luisi to depict Brünnhilde’s awakening in brilliant fashion. But although she sang well thereafter, her voice lacked a truly thrilling character in the extended duet with Morris’s Siegfried.

Bryn Terfel’s Wanderer was made up to reflect the passage of some seventeen or eighteen years since the events of Die Walküre. His hair is now long, gray and stringy, he has a grizzled growth of greying beard, and he wears a floppy hat to conceal his false left eye. In the first two acts Terfel’s singing was strong as the Wanderer toyed with and taunted Mime and Alberich, but in Act Three his characterisation took on an even deeper dimension as the Wanderer struggled to come to grips with the consequences of his earlier deeds, meeting first with 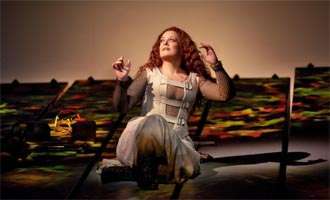 Erda and then encountering Siegfried. This Act, which Wagner composed after a twelve-year hiatus – he wrote Tristan und Isolde and Die Meistersinger von Nürnberg! – following the completion of Act Two, contains some of the Ring’s finest and most powerful music, and Terfel did it full justice. Viewers in HD also had the benefit of close-up views of his facial expressions, reflecting the Wanderer’s changing emotions – tenderness and affection toward his grandson, then angry defiance and finally defeated resignation, but with just a trace of a smile to reflect the God’s satisfaction that his plans are working. This was Terfel in top vocal form, bringing insight and intelligence to his portrayal of the Ring’s most complex character.

Gerhard Siegel is firmly entrenched as the Mime of choice at opera companies worldwide, and this brilliant performance demonstrates why. His tenor voice was always spot-on, and his expressive reflections of Mime’s emotions were terrific, especially close-up in HD. Eric Owens, who stole the show as Alberich in Das Rheingold, again brings his dark, penetrating voice and sinister characterisation to the role. François St-Aubin’s costumes made the two Nibelungs appear deformed and smaller than their portrayers, and were effective in reflecting the ageing of the characters since the events of Das Rheingold.

As was the case with both earlier ‘Ring’ operas, the HD experience brought welcome visual variety to the rather static staging that is all but compelled by the dominant presence of the ‘machine’. Multiple camera angles, close-up images and subtitles help viewers appreciate the drama, and the enveloping digital sound is the next best thing to the immediacy of the Opera House’s acoustics. Indeed, some details may have come through even more clearly in the cinema setting; for example the violin pizzicatos that punctuate the rapid duple figures on the flutes as the Wood-Bird flies off at the end of Act Two.

It will be interesting to see what visual effects lie ahead when Luisi conducts the premiere run of Götterdämmerung in January and February, and whether James Levine’s health will permit him to return to the pit for the three ‘Ring’ cycles scheduled for April and May. It seems safe to conclude, however, that the ‘Ring’ will be musically secure in Luisi‘s capable hands even if Levine is unable to resume his conducting duties this season.