Three concerts in two days provided a brief glimpse of this year’s Aldeburgh Festival and a welcome chance to catch up with one of its artists-in-residence, Thomas Larcher.

On Monday June 17 there was an intriguing Schubertiad at Snape Maltings Concert Hall, for a retrospective of the benefit concert the composer gave on 26 March 1828 in the hall of the Vienna Philharmonic Society – an event that harvested a handsome profit of 800 florins. Today its miscellany of disproportionately scattered items seemed remote from modern practice.

The recital’s centrepiece was the E-flat Piano Trio, D929, given an understated account by Trio Isimsiz, whose restraint beautifully captured the work’s intimacies,
Pablo Hernán Benedí (violin) and Michael Petrov (cello) responding expressively to its many confessional-style exchanges and both smoothly integrated with Erdem Misirliogio (piano). The expansive first movement and discursive Finale held the attention, but it was the rage and resignation of the Andante (and the humour of the Scherzo) that gripped. Earlier, Quatuor Diotima gave an atmospheric rendition of the first movement of the String Quartet in G, D887. This farewell to the genre was suffused with gentle mystery and emotional disquiet. 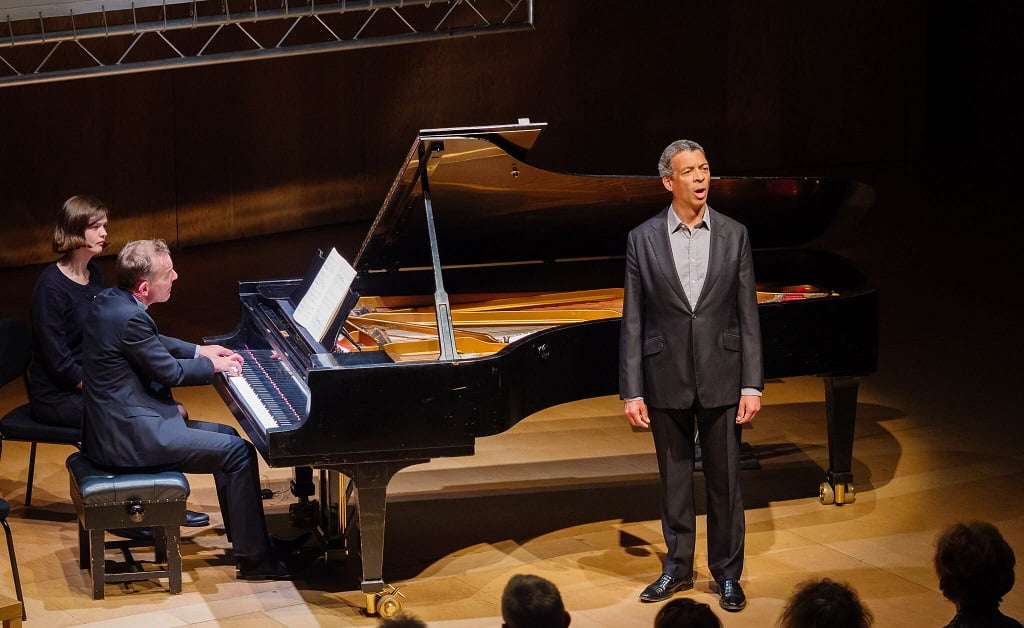 The rest of the programme occupied vocal music. Songs conceived for Johann Michael Vogl were given distinctive outings by Roderick Williams in collaboration with Roger Vignoles. Other offerings included mezzo-soprano Fleur Barron and eight male voices from the Chamber Choir of London in Ständchen, D920. If surging emotions were only marginally present, there was much to enjoy from Schubert’s expressive harmonies. Waiting in the wings were Mark Padmore and Richard Watkins (horn) who with Vignoles gave a wonderfully vivid account of the little gem that is Auf dem Strom, D943.Flawless horn-playing and impassioned vocal tone conveyed the poet’s grieving narrative.

Quatuor Diotima reappeared the next morning (June 18) at Aldeburgh Church. First off was Szymanowski’s stylistically far-reaching Second String Quartet (1927). The first movement’s exquisite otherworldly sonorities (often compared to Ravel) were given delicate expression, shaping its languor and nervous tensions with single-minded focus and affection. Echoes of Bartók which colour the Vivace were no less intense. Up next was Larcher’s Fourth String Quartet (Lucid Dreams, 2015). Light pouring through a stained-glass window inspired the work’s title and serves to underline the luminous calm of the second movement where quiet chords evoke a kind of devotional stillness. The first three movements have dedications to deceased friends but the final one transfers the theme of loss to a universal level including “those who have died trying to reach Europe in their desperation.” All the more fitting perhaps to follow with the emotional ambiguities of Schubert’s ultimate String Quartet begun the previous evening now in a complete performance which crystallised its defiance and resignation.

The afternoon featured the third of four poetry and music slots. This one at the Britten Studio focused on his Songs and Proverbs of William Blake, Opus 74, composed in 1965 for Dietrich Fischer-Dieskau. The performance was prefaced by an engaging panel discussion (mercifully not on bar-stools with guests talking over each other). Williams sang with clarity of diction and musical intelligence. There’s plenty of dark colouring in his tonal palette, almost tailor-made for the unflinching brooding of some of the settings; and with Andrew West’s impressive handling of the disturbing accompaniments the whole was utterly absorbing.