With Yannick Nézet-Séguin conducting the Philadelphia Orchestra in the final, an unprecedented amount of prize money on the table – US$150,000 to the winner – and, endeavouring to refute charges of favouritism or partiality, an assurance that “none of the competitors currently study or have ever studied with any member of the jury”, the inaugural China International Music Competition sets the bar ambitiously high. Of the twenty pianists taking part over the past seventeen days, three each came from China, Russia, South Korea and the United States. No one from Britain – though Dmitri Alexeev was on the jury, currently Chair of Advanced Piano at the Royal College of Music, along with Ronan O’Hora, Head of Keyboard and Advanced Performance Studies at the Guildhall School of Music and Drama. Yoheved Kaplinsky, in charge of the Juilliard Pre-College Division, co-chaired. 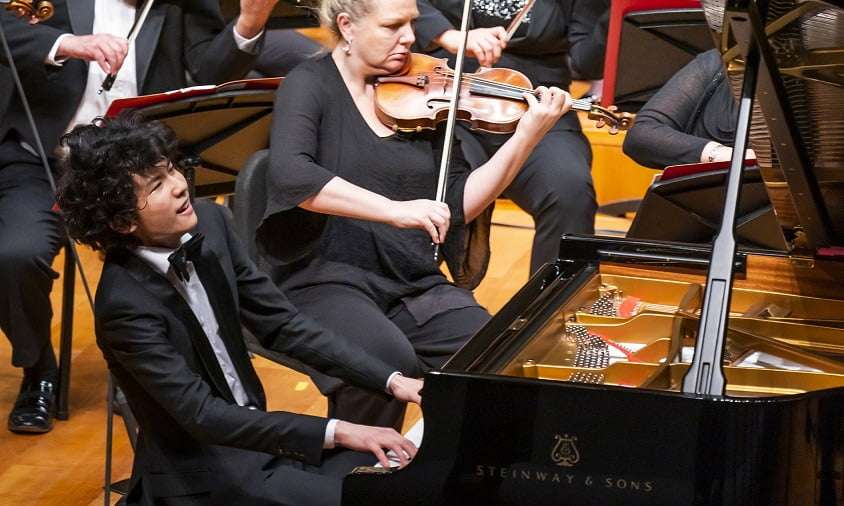 Competitions are never comfortable affairs. The best participants don’t always get through the rounds, winners can be forgotten, losers can be remembered. For sure, they are a bear pit, testing nerves and personality. An arena for the fittest. And, whatever the professed desire for integrity, too frequently a place where the underbelly should not be examined too closely. If you believe everything is white and pure these days, think again. It isn’t.

Following a Classical Concerto round, the Beijing final was whittled down to three pianists taking on three warhorses. Thoughts, concerns, cheers, hasty scribbles.

Mackenzie Melemed (USA, twenty-four, studying with Robert McDonald and Emanuel Ax, winner last year of the Juilliard School’s Arthur Rubinstein Piano Prize, and the Paris Recital Prize at the Prix de Tarnów Competition). Rachmaninov Rhapsody on a Theme of Paganini. Strong, clear, temperamental piano-playing, rising to the occasion, with orchestra and conductor actively engaged. A pianist who listens and has a sense of performance. Sonorous D-flat poetry in Variation XVIII, a natural, matured feeling for shape, climax and cadence – beautifully sighed pause at the end. At his best, up there with the greats. A degree of life experience. Two curtain calls.

Alexander Malofeev (Russia, seventeen, a student since 2007 of Elena Berezkina, winner of the 2014 International Tchaikovsky Youth Competition). Prokofiev Piano Concerto No.3. A seasoned player, one of the Gergiev/Matsuev circle, used to working with the best conductors and orchestras around. Fearsome, prodigious technique, as drilled and faultless as a Cold War Olympic gymnast. He’s a slight young man with presence. This is a 10/10 high-wire performance, as terrifyingly fast as it is remarkably slow. Malofeev hasn’t always been the most poetic of pianists (one of his up-and-coming Moscow peers, Maria Andreeva, an Ovchinnikov student, penetrates deeper, more-tender recesses of the soul), but in the central variation movement he finds real mystery and fantasy: all the woods and sprites and corners of a Russian fairytale are here. The balance between trill, scale, bass and treble at the start reminds me of Kissin. So, an account born of the idiom. With fingers that seem (and look) like an extraordinary extension of the keyboard – locked, rhythmic yet fluid, left-hand conducting occasionally – every gesture, chord and lining, every colour and attack is for the savouring. Visceral. Normally giving nothing away, he permits himself a faint smile. Nézet-Séguin and his Philadelphians, on the edge of their seats, exhilarated and animated, go the distance, from lonely opening to final carillon blaze. Four curtain calls.

“Scores throughout the entire competition are not cumulative”, the published rules read, “there is no weighting of any phase.” Voting is by a “yes/no” procedure. So, discarding the evidence of earlier stages – Malofeev, Melemed, Yun. Obviously. An hour on, following burdensome speeches and the kind of sanctimonious pomposity, pedagogy and bureaucracy that kills art, expectations are dashed. Yun, gold; Malofeev, silver; Melemed, bronze. Surely not? Even Yun looks baffled. How, I wonder, will he conjure the demands and stresses of continuing education with the touring dates and extras of international management? He and Malofeev are of a similar age, but it’s Malofeev who’s the tougher, more hardened campaigner, a pianist for the big time.

Competition juries – customarily the same elders jet-setting the same circuit – come up worryingly often with perverse not to say crass decisions. Decisions that impact on lives and people. Last September’s period-instrument Chopin Competition in Warsaw, marred by some insensitively crushing ‘kick-outs’ along the way, left me resigned. This latest Chinese venture doesn’t ease my mind. A popular result locally, perhaps, but a face-losing one internationally.