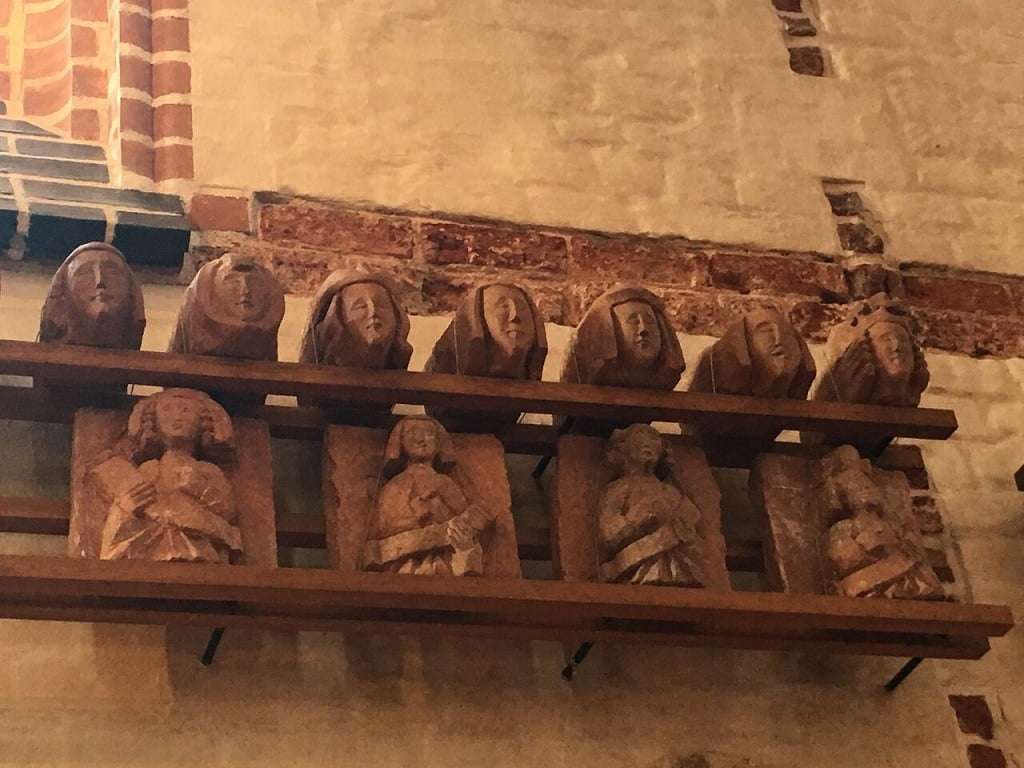 The eyes of a thousand terracotta figures watch over the audience and performers at the Glasperlenspiel Festival (Klaaspärlimäng in Estonian). For over half a millennia, these sculptures have decorated the fourteenth-century St John’s Church in Tartu where all of the Festival concerts are held. Tartu is a charming city; Estonia’s university town and it attracts scholars and academics from all over the world.

The first annual Glasperlenspiel Festival was in 1995, and has developed a following, drawing audiences from around Estonia and beyond, with loyal fans coming from as far away as Australia. Throughout its existence, it has taken pride in its unusual programming, which this year included a contrabass balalaika soloist and a hand-bell choir. St John’s Church’s acoustics are best suited to early and choral music. Fortunately, both genres were well represented. Audio of the concerts is live-streamed, and most of these recordings are archived for on-demand listening via the ERP Live app. There is a strong visual component in the festival. At every concert, the artist Anna Litvinova is at her easel, creating a portrait in real time. The result is a colorful oil painting of the performers in action.

Opening night was a hodgepodge of works and styles. The Festival Orchestra, led by Andreas Mustonen, was at its best in the most conventional work, Boccherini’s Symphony in D-minor (La casa del diavolo). The virtuoso contrabass balalaika player Mihhail Dzudze, along with a complement of winds, brass and percussion, joined for Alfred Schnittke’s Polyphonic Tango, the balalaika lending an exotic flavor to the conventionally classical group. 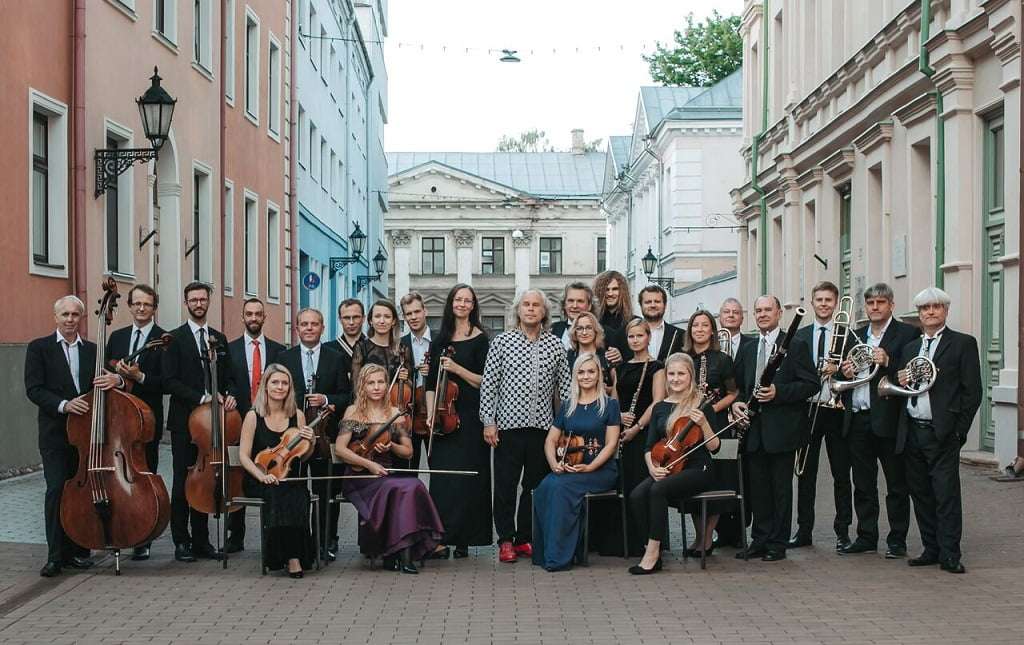 The composer and violinist Kristjan Kannukene was the soloist in the world premiere of his ORG#MAD. Tall, dressed in long black coattails, with a mop of long hair that often covered his face, Kannukene drew intense forte slashes with his bow, over a repeated motif on marimba, punctuated by regular whacks on timpani. The work was powerful, forceful, and mercifully short.

The major work was Concerto of Light and Shadow by Peeter Vähi, the artistic director of the festival. The thirty-minute piece featured the Slovenian violinist Nadezhda Tokareva. The first movement includes a modal, lyrical section, which dovetails into the next section, which began with the orchestra clapping – at first as if applauding, then rhythmically. Other sections showed off Tokareva fiddling in a folksy style, impressive virtuosic displays, and delicate high ethereal passages, concluding with Tokareva playing a cadenza of arpeggios as she walked off, and ended with a simple chime on glockenspiel.

All three concerts on July 13 stood out. The noontime program, The Hanseatic Way, was performed by the combined forces of Canto Fiorito from Lithuania and Musica Antiqua Salzburg, music from the countries of the Hanseatic League – merchant guilds in towns on a trade route from London to Tallinn, a northern counterpart to the Silk Road. It was a well-conceived and beautifully-performed program that began with a set from England by Anthony Holborne, William Byrd and Thomas Tallis. The singers of Canto Fiorito were captivating in Byrd’s Miserere. The combination of sackbuts, cornettos and organ with singers worked nicely in this space, and for Schütz, Andreas Düben and Bartlomiej Pękiel. One of the most enjoyable points was the jaunty instrumental Chaconne by Johann Valentin Meder (Latvia/Estonia) performed by two recorders and organ. 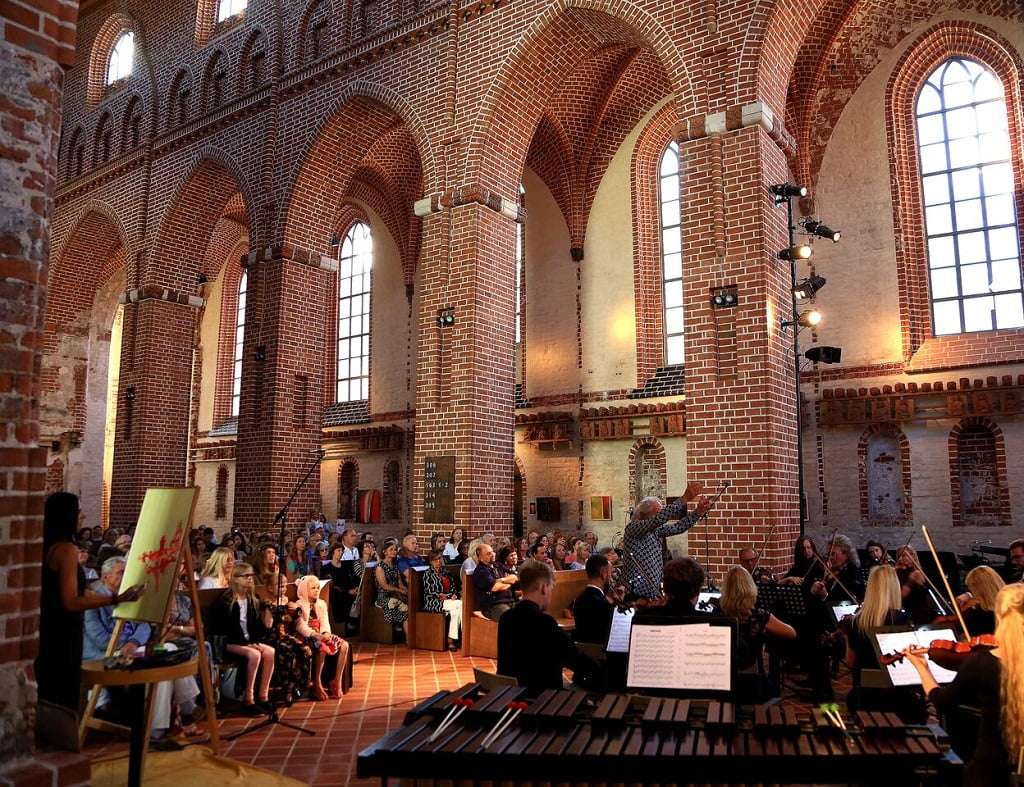 The concert was accompanied by a video of historic images of Hanseatic cities interspersed with contemporary children’s drawings. Though the video was a good concept, it was difficult to see – the light in the room washed out the projected images – and I found it distracted from the aural experience.

For the late-night show, the captivating Collegium Musicum brought music by Cyrillus Kreek, and the electric guitarist Jaak Sooäär. The program consisted mainly of selections from Kreek’s Sacred Folk Tunes for Mixed Choir, and the composer’s unquestionably beautiful music takes full advantage of the Estonian tradition of singing, with its beautiful intonation and close harmonies. I was afraid that the timbre of the electric guitar would clash with the warm tones of the choir, but it complemented effectively – Sooäär understood very well when to join in and when to stay out of the way. 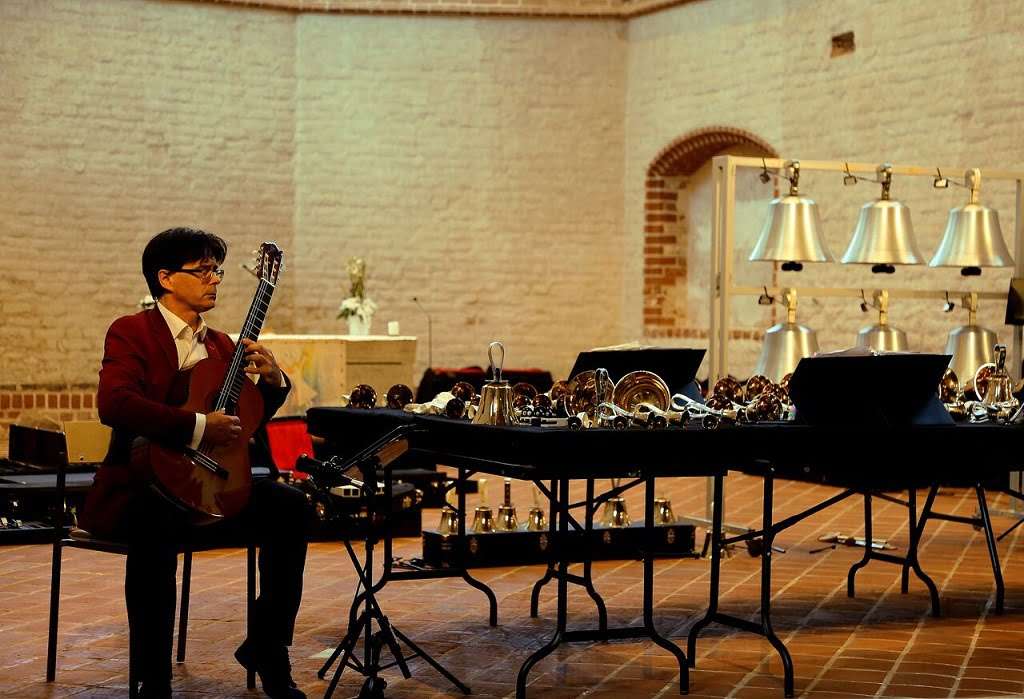 The Russian violinist Maria Krestinskaja and harpsichordist Imbi Tarum shared July 14’s early-evening concert with soprano Kädy Plaas and pianoforte player Reinut Tepp. This was the most traditional program of the festival, a recital of Baroque and Classical music, Sonatas by Bach and Biber, with ornamentation and colour, Plaas and Tepp’s half of the program was less well suited to the acoustics. Plaas has a lively quality to her voice, and her diction in two Mozart songs was excellent. In works by Haydn, Tepp’s accompaniment was full of grace and good humor. He proved his virtuosity in a solo turn, Haydn’s Andante con variazoni, and in his Arianna a Naxos Plaas did not give a convincing performance; though her voice quality was lovely, the result was uninteresting.

Late-night entertainment on July 14 it was contrabass balalaika, cello and guitar. Dzudze was joined by Boris Andrianov and Dimitri Illarionov, one classical bonbon after another, Bach, Couperin, Rameau, Albéniz, Schubert, Piazzolla… and Moldovan folk-music

Evening Bells, on the 15th, was striking. The Arsis Handbell and Chime Ensemble presented an Estonian program that showed off myriad colors, timbres and textures, as well as considerable talents. The arrangement of Arvo Pärt’s Spiegel im Spiegel was absolutely mesmerizing, aurally and visually, with the very graceful and deliberate movements required to play these bells. The world premiere of Alisson Kruusmaa’s Two Watercolors featured rarified harmonies, including augmented chords that hung expectantly in the air. The Canadian guitarist Rémi Boucher, had the stage to himself for two short pieces: René Eespere’s romantic In Doubt, which was sensitively and beautifully played, and Boucher’s own arrangement of Heino Eller’s Homeland Tune, expressively telling a story with the music. He was joined by eight hand-bell players for another work by Eller, Evening Song. Two-dozen teenage bell-players joined the core ensemble for Bells by Tõnu Kõrvits and Peeter Vähi’s Bronze Reflections, which ingeniously employed the bells of St John’s Church.