Bright sunlight greets me as I arrive at Greenwich’s Old Royal Naval College, which looks even more spectacular than usual in the unseasonably summery swelter. This imposing World Heritage site, on the banks of the River Thames, is home to Trinity Laban Conservatoire of Music and Dance. Between Friday 29 April and Sunday 1 May, it will play host to the second Greenwich International String Quartet Festival. I’m here to meet David Kenedy, festival director and string chamber music co-ordinator at Trinity, who tells me how this location is particularly suited to the weekend of events. “We’re very fortunate”, says David. “We have, less than one-hundred metres away, this amazing chapel that the Greenwich Foundation gives us extensive use of and I can’t imagine a better space for string quartets.” The Old Royal Naval College Chapel sits opposite the site’s celebrated Painted Hall and possesses a wonderful acoustic; it a grand and beautifully decorated space with none of the sound problems of many similar venues. 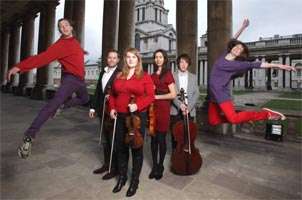 This 2011 festival is the second such event, following a success in 2009, and many of the groups heard previously return this year, such as the Wihan Quartet, celebrated in central European repertoire, and the Carducci Quartet, Trinity’s string quartet in residence, are old friends of the college and frequently visit to work with students. David explains the involvement of another of the leading ensembles at the festival: “The Kopelman Quartet, who aren’t directly associated with Trinity, have still been in here several times and played for us at no cost to the college as an act of generosity.” There are, however, new visitors. “The Turtle Island Quartet concert is a first in the UK, so that will be a very exciting event for us just to see what they are doing.” The Turtle Islanders bring a programme of their mould-breaking crossover material, which features music based on songs by Jimi Hendrix, an event that sums up the festival’s commitment to new and unusual approaches to the string quartet. David tells me about another unusual event, Marathon: New works for string quartet & dance, which brings together Trinity Laban’s two constituent colleges. “Teams of composers and choreographers – composers from Trinity and choreographers from Laban – they’re all students – were invited to submit proposals for works that could be completed and eventually performed as part of the festival. We had a competition last November with, I think, seven groups that presented sections of works that they could then complete if they were asked to. They were teaming up with Trinity string quartets and Laban dancers so it’s very much a student event. They were presenting us with works that were astonishingly imaginative and we selected four which have now been completed and will be presented right at the heart of the festival on the Saturday afternoon in the Maritime Museum which is an amazing space.”

Students from many of the country’s conservatoires will take part in the Cavatina Intercollegiate String Quartet Competition and this year’s contest has led to the commissioning of an intriguing new work from Cecilia McDowall. “Remembering what it was like at the first festival, sitting through seven or eight performances by competing string quartets of the same work repeated in rather similar form, I asked Cecilia if she could write something that had variable constituents. The example I gave was when I’m playing a Bach Suite there are no dynamics in front of me, there are no articulations marked, there are no tempo markings – that’s one of the reasons why all the performances you listen to by different artists are so different – can you do something similar in the piece that you’re writing for string quartet so the audience don’t have to listen to seven or eight versions that are amazingly similar and she really rose to the challenge. In the score she’s put the dynamics and some suggests for execution, but in the parts she’s left a lot empty and it’s up to the performers to put their own dynamics in, to change things – a lot of the ingredients that she’s written in can be changed at the whim of the performers so we should get to hear some very different performances during the festival.”

Keen to reflect the naval heritage of the venue, the festival has commissioned another new work, from Rob Fokkens, which involves members of Trinity’s junior department. “He’s written a piece called West Africa Squadron, which is linked to the maritime theme of Greenwich and the ships that used to go out from here and has links to the slave trade; but it’s a ‘good’ slave story about how the British Navy was trying to prevent other ships and other countries from continuing the slave trade after it was banned, so this was a kind of good slavery story when we went onto the good side and were defending the people who had been enslaved – there’s a core of string quartet parts and then around it a string orchestra – a very exciting piece from what I’ve heard.”


It’s a weekend packed with events – almost twenty in total – including talks by Rob Cowan and Roderick Swanston, and a performance of Mendelssohn’s Octet in which audience participation is very much encouraged. “The fact that we’ve got eight very good players taking lead roles in it means that the whole thing won’t fall apart. Anyone who could play anything would be welcome to join in and if they just play along for a few notes and try to keep vaguely with, it still doesn’t sabotage the performance. If the weather’s alright we’ll put it on in our courtyard and there’ll be the sound ringing out all round the site – some probably more pleasant than others! – of people playing Mendelssohn’s Octet.”


With one successful festival behind him, and with high hopes for a repeat of that success, I ask David if the festival has become a more difficult proposition since the economic downturn. “The planning for this started before the credit crunch really hit. Thank goodness we have some very understanding and supportive sponsors who see all the more need to put on events like this that help inspire our students and they are very committed to what’s going in here. We have some new sponsors too, but a lot who’ve supported us through thick and thin, thank goodness, and hopefully will continue to do so; but I haven’t yet seen a serious downside and I think people will see more and more the need for institutions such as ours to turn to private sponsorship as the fact that the government withdrawing funding becomes more and more publicised, hopefully it could even work in our favour.”