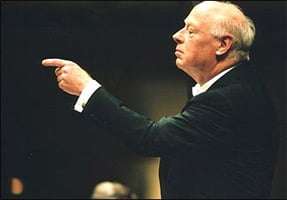 That would make all the Bs in German musical nomenclature – B (H), B flat (B in German), B flat, B – add in Eightieth and you’d get a rather odd theme B, E, B flat, B flat, B – anyone up for making a double set of variations, with a finale introducing of Happy Birthday to You as a counterpoint?

Celebrations are in order. Bernard Haitink turns 80 on 4 March 2009 and he doesn’t seem to be cutting down his schedule. He’s just been on a Far East tour with the Chicago Symphony, of which he is currently Principal Conductor. He’s in Amsterdam with the Royal Concertgebouw Orchestra for the birthday itself, then coming to London with the Dutch band for two concerts at the Barbican Hall the following week (14 & 15 March). He’ll be back in London in June, for a French programme with the London Symphony Orchestra and two performances of Mahler’s Ninth Symphony at the Royal College of Music Orchestra. Then – touring again with the Chicago Symphony – giving his first concerts in the refurbished Royal Festival Hall in late September as part of the Shell Classic International series. In January 2010 he’ll be back with the LSO for Schubert and Mahler programmes, which he then takes to New York for the orchestra’s annual residency.

Haitink has a particular standing and popularity in Britain, where he has held numerous principal positions. In his native Holland he was chief conductor of the Netherlands Radio Philharmonic from 1957 and, after sharing honours with Eugen Jochum, the Principal Conductor of the Concertgebouw Orchestra from 1963 to 1988. In the UK, he was Principal Conductor of the London Philharmonic Orchestra from 1967 to 1979, overlapping slightly (and remaining in close contact with the LPO) with his Music Directorship at Glyndebourne (1978 to 1988) and then, again with a slight overlap, through 15 turbulent years at The Royal Opera, Covent Garden between 1987 and 2002. Since then he has remained faithful to London audiences with appearances at the Proms and the Barbican Hall (LSO), even though his connection with the London Philharmonic seems to have slipped. 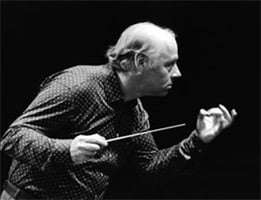 I first saw him, with the Concertgebouw, in Shostakovich’s Fifth Symphony at the Royal Festival Hall and then, in Edinburgh, in Mahler’s Fourth Symphony, in the early 1980s. Looking back to the Royal Festival Hall diaries from that period, I could have seen him do so much more – particularly with the London Philharmonic. Unfortunately I hadn’t then fully realised the quality of Haitink’s unobtrusive music-making. He’s not an egotistical director; instead, every gesture is devoted to clarifying for the players the composer’s meaning behind the notes. Haitink’s not interested in appearing flashy for the sake of the audience – he stands on the podium simply at the service of the composer, and he expects the musicians to be just as devoted.

Perhaps the Dutch and British are similar in that respect: regarding with suspicion the “flash Harrys” of the conducting world. Certainly my concert-going life in Britain has been much enhanced by Haitink’s scrupulous and peerless performances. Of the hundreds of performances I have heard him conduct over thirty years, there are less than a handful that were not satisfying (an oddly uneasy Don Giovanni and one inert Simon Boccanegra at Covent Garden, and the Mahler 6 with the Chicago Symphony at last year’s Proms, with its hopelessly mishandled cowbells). 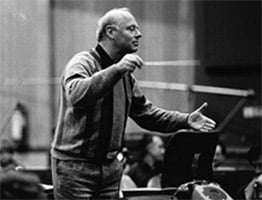 However, those such are wildly outweighed by his outstanding performances of Mahler 3 (the BBC Symphony Orchestra performance at the Proms exceeding even his 75th-birthday performance with the Berlin Philharmonic at the Barbican), and the Bruckner canon. Then there’s his return to opera after five years and his Covent Garden experience – Debussy’s Pelléas et Mélisande which I went to Paris to see in June 2007, before he returned to Royal Opera for Parsifal. Also memorable was a BBC Proms’ Martinů 6 with the Boston Symphony (of which he is currently Conductor Emeritus); and the Chicago Symphony Shostakovich 4 also at the Proms (last summer), a volt face from the disappointing Mahler 6 the night before.

Also worth a particular note are his performances with youngsters – both the European Union Youth Orchestra, which he led for a number of years (a Shostakovich 4 in Edinburgh and a Mahler 7 at the Proms spring to mind), and at the Royal College of Music. Mahler and Bruckner have been the main stay in his performances at the RCM – and continue in this June with Mahler 9. After receiving an Honorary Doctorate there, post-performance, he gave one of his rare, but incredibly moving speeches about how much he enjoys conducting new generations of musicians, because that is where the future lies. 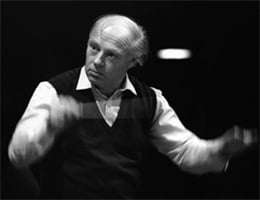 Up the steps from the RCM to the nearby Royal Albert Hall, the previous decade – in 1998, when the Royal Opera House was undergoing its redevelopment – Haitink had just finished conducting a Ring Cycle, performed Prom-style (but not as part of BBC Proms). At the end of Götterdämmerung, he turned to the audience and appealed for our help in saving the Royal Opera Orchestra and Chorus that was then under funding threats. The pity of his tenure at Covent Garden was the constant politics, but the rude health of the company now under Antonio Pappano is almost single-handedly due to Haitink’s stand against those that wanted cuts until, potentially, nothing would have been left. Earlier he had had a similar battle with the Dutch funding authorities that might have lost 23 permanent players from the Concertgebouw Orchestra.

Haitink’s stand for Royal Opera was as heartfelt and honest as Hans Sachs’s appeal to the importance of art (the nationality of the art is, in essence, immaterial), and so it is utterly appropriate that one of Haitink’s very greatest achievements at Royal Opera was Die Meistersinger von Nürnberg, in Graham Vick’s beautifully observed and colourful production. Now available on the Opera House’s Heritage label (although it is a shame that the final scene was not included as a bonus DVD, given that the BBC relayed Haitink’s farewell performance at the Garden, ending with this scene), his long-standing relationship particularly with John Tomlinson (Sachs) and Thomas Allen (Beckmesser) making more sense of the opera than probably any other production.

In recording terms, Haitink is particularly associated with the Philips label. For his 65th-birthday (15 years ago!), Philips released a box set of complete symphonies – Beethoven, Brahms, Bruckner, Mahler, Schumann and Tchaikovsky. Over on Decca, there is a complete Shostakovich cycle (now in various editions), which was recorded by the Concertgebouw and the London Philharmonic. For EMI he recorded the complete Vaughan Williams (LPO) and Elgar’s two (Philharmonia), and that company also recorded the Mozart/da Ponte operas from Glyndebourne, Wagner with the Bavarian Radio Symphony Orchestra, and Der Rosenkavalier in Dresden.

Now with a strong relationship with the LSO, he appears in Brahms and Beethoven cycles on LSO Live, and perhaps his fantastic Strauss performances from last year will also appear there. On the Chicago Symphony Orchestra’s own label, ReSound, there are new Mahler and Bruckner recordings and DVDs of him conducting many Glyndebourne productions are also available (not least the David Hockney-designed The Rake’s Progress). DVDs of him conducting Mahler with both the Concertgebouw (the Christmas Day matinee concerts) and Berlin Philharmonic are also available, as well as a rarer DVD, which is very recommendable, a masterclass on Brahms’s Third Symphony, with young conductors at the Royal College, where he comes over as a gentle, thoughtful and amusing personality – exactly as you would hope he would be.

I hope you will join me in wishing Bernard Haitink the happiest 80th-birthday.