The Swedish soprano who appears in the production of Don Giovanni, which opens the new season at Covent Garden, talks to Mansel Stimpson… 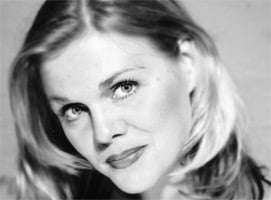 Many of us can point to some incident that affected us and changed the whole course of our lives, and that’s certainly true of Miah Persson who has already triumphed at Covent Garden in Le nozze di Figaro as Susanna and at Glyndebourne in Così fan tutte as Fiordiligi. Moving on but still staying with Mozart, she is now preparing her very first Zerlina. She will appear in the first of two distinguished casts when Francesca Zambello’s production of Don Giovanni starts off the 2008/09 season at Covent Garden. That’s where we meet, and no-one could be more natural and easy in her manner – less diva-like one might say – than Miah who was born 200 miles north of Stockholm but who now resides in Sussex where she shares a home with her husband, the tenor Jeremy Ovenden, and their two children, Ella and Edward.

Miah would not now be living in Lewes but for her career in opera and, as she readily acknowledges, she wouldn’t be an opera singer but for an action taken by one of her teachers, Helena Tydén. You could see the working of destiny in this. Unfamiliar with classical music until she turned twenty and not having a musical background but being possessed of strong interests such as psychology, linguistics and the possibility of working in social science to help people in crisis, she was not an obvious candidate for the career that would be hers. It’s true that from the age of six she loved performing in her home town of Hudiksvall and that she relished singing – each Christmas she would appear in a cabaret.

But, when the opportunity to study singing in a classical context came along, she took it as an experiment only to be disillusioned by the teaching at the college in which she found herself. She felt this so strongly that she was on the point of abandoning all thoughts of a singing career. Fortunately, she had already studied with Helena Tydén and the latter, aware of the situation in which Miah now found herself, put her name forward for a singing competition without first discussing it with her pupil. Since it was a fait accompli, Miah agreed to do it, and she won.

“I would have continued to sing in choirs and the like because of the enjoyment that singing gave me, but it would not have become my career so Helena is actually the reason why I am singing professionally today. It was she who made me love singing and performing, but also important to me was another teacher who came along a little later, Ingrid Eksell-Elders. She was the same age as Birgit Nilsson and they studied together, so she was from the ‘old school’ and she did something completely different for my voice. She made me use it in its full range, which, of course, makes it bigger, richer and fuller, and that was crucial to my being accepted by Stockholm Opera.

“I was lucky because students at the opera school I attended were regularly selected by Stockholm Opera for small parts and I was picked. But then the Susanna in their production of Figaro fell ill, and that was a role that I had already done. So, although I was there to sing Barbarina, they asked me if I could jump in as Susanna instead. I had just one day to rehearse but it went really well and that, I think, was what made them offer me a place as a new contract singer when a vacancy came up. That was just the experience that I needed having just come out of school because it taught me so much. When you find yourself rehearsing one show in the morning, doing another in the evening and then in a third the morning after, you just have to keep things in your head and learn how to use your voice in a way that enables you to do all that is required. On top of that, it was fantastic to start off with a group of people that you enjoy being with, and every time I come back to Stockholm now it feels like I’m coming home.” 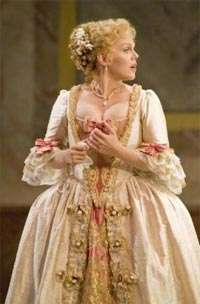 The role of Sophie in Der Rosenkavalier has introduced Miah to a number of important opera houses including that in Salzburg but, not just in the anniversary year of 2006, Mozart is the composer who seems to dominate. “He could never become too dominant because, if and when my voice starts developing into something a little bit richer or fuller, I will start doing the Countess instead of Susanna and Donna Elvira instead of Zerlina. I would also like to look into more Donizetti and Bellini and see if that would take me into Verdi later on – I mean the lighter roles, of course – and one day I hope I will be able to do the Marschallin as a step-up from Sophie. But my voice is so suited to Mozart that I expect him to remain central to my repertoire.”

For Miah, who now has Roger Vignoles as her pianist-partner for recitals, song came to the fore even before opera. “I love poems and in Lieder I love understanding and working with the text. Normally you do recitals in smaller halls and that means you can use your voice in a completely different way. A song is itself a mini-opera with a beginning, a middle and an end which you need to express and act out, but with Lieder, although you can use your operatic side, you can whisper and convey something through the tiniest details.”

Despite the differences in scale and otherwise, what Miah says here has definite relevance to how she approaches a role in opera and we go on to talk about her debut as Zerlina. This role, that of the peasant girl who on her wedding day finds herself confronted by the philandering nobleman Don Giovanni who is out to seduce her, is one that can be played in various ways and I ask her to elaborate on the rehearsal process and on how her own ideas, those of director Francesca Zambello and of the bass Robert Gleadow who sings the role of her betrothed, Masetto, are brought together.

“Francesca is back for this revival. We were working on Zerlina’s first aria ‘Batti, batti’ and on the recitative that precedes it in which she is trying to persuade Masetto that nothing happened when she went off with Don Giovanni. Here the question that arises is how Robert and I play off each other. His response will be decided in part by whether I’m being pushy in asserting very, very strongly that nothing happened or whether I’m pleading with him to accept what I say. Then, should Robert decide not to be convinced but instead to imply that he doesn’t believe my denials at all, I in turn have to work on that. As we played with those possibilities yesterday, the recitative took on three quite distinct forms as we felt our way to the one that led most effectively into the aria. Francesca was absolutely involved in this. After we started off she would say ‘maybe you should think about it’ and that would make us came back with another approach that felt really good. But we were aware of yet another possibility, and she said ‘OK; try that’. So in the end we found something that felt right for all of us, but we were playing with different tones and colours.”

If that shows what one short passage calls for, there’s also the need for Miah to take a line on Zerlina generally, “She’s a tricky character, and the only thing that is absolutely clear-cut is that, like Susanna, she is restricted by her position in the hierarchy. Don Giovanni is of the nobility and she is not. Donna Anna and Donna Elvira being on the same level can tell him off, even slap him. But Zerlina can’t because she knows that for that he could kill her, and Masetto knows it too. But it’s also true that she is tempted by Don Giovanni.

“I’m thinking that when they meet it’s the first time that someone of the nobility has even approached her, and here he is telling her that she’s beautiful and gorgeous and should come away with him. You could say that she forgets everything and just gets carried away without realising what she’s doing, but that really turns on how Giovanni is presented. If he came on her too strongly, she might question it more, but my Giovanni is Simon Keenlyside and his approach is to make the Don appear very gentle so that he seems chivalrous. He is really giving space to Zerlina and, by giving her time to realise that he is a person she would like to go with, it becomes a situation in which he can successfully deceive her. But by the last occasion on which Giovanni carries her off, the time when she cries out towards the end of the opera, things have changed. She has heard the accusations of Donna Elvira and, although she doesn’t know if this woman is honest or even fully in her right mind, I do believe that there’s a kind of female bonding between them, and that means that this time she’s not going willingly: it’s forced.”

With a great cast and Sir Charles Mackerras conducting (Miah describes a Salzburg performance of a Mozart Mass under his baton as one of her most cherished musical experiences), Miah is looking forward to opening night, and the more so because the politeness of English audiences appeals to her. “I love singing in England and apparently I’m quite liked.” With that understatement so contrary to what you expect to hear from a diva, the interview comes to an end. It has been a pleasure.