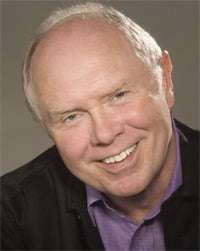 The conductor Stephen Lord is making his second visit to English National Opera to conduct the first revival of Jonathan Miller’s production of La bohème. On entering the room for our interview at the Coliseum, his enthusiasm is immediately apparent. “I have a great time here; it’s a wonderful place to work. The atmosphere is very collegial but always familiar, which you don’t always get in a big city, especially in a place that has so many operas going on simultaneously. The only downside is the rehearsal places are so far away from anything. It’s a commuter’s nightmare, especially at the wrong times of day, but it’s a great place to work.”

Lord enjoys a special connection with the Coliseum itself, as he explains. “A close friend, a friend who pushed me into conducting, was Colin Graham, the resident producer and artistic director here before he moved to the States. He did all those operas with Britten. I had heard so much about the Coliseum, so last year when I made my debut here for Rigoletto it was very bittersweet, because he died a couple of years ago, and this place meant so much to him. We once did a performance of Curlew River, which we put together in St Louis, where he ended up living. After the premiere we were all moved to tears. Colin said, ‘Oh if you like this, then let me show you something’. So he took me to his home and we watched his production of Gloriana from here, and as we watched it, it was fun looking at the old choristers that had remained his friends. So the company here has a great feeling of nostalgia for me.” 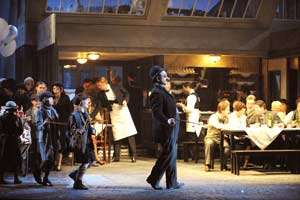 For La bohème, Lord will be conducting performances in October and November with Gwyn Hughes Jones as Rodolfo, then resuming in January with Alfie Boe reprising the role. Does he find it a problem with the principal singers changing? He smiles in response. “You know, everyone brings their own set of strengths and liabilities, including me! The interesting thing about it is that it will keep things fresh – very fresh! A piece like La bohème is a blood-type, ‘O negative’, if you know what I mean. Alfie Boe’s a wonderful artist and he’s probably that type too, so he will come in and we will find our way. The cast works so happily together that it will be tough, but it will be like your brother went off to university, and now we have a foster brother. They will be wonderful and welcoming. Our baritone, Roland Wood, did it with Alfie last time, and because they work together a lot they will be fine. I like it actually, I’m one of those perverse individuals that if a singer happens to go ill, and we have a substitute come in, I kind of like it. In a sense it’s quite good for the cast, because nobody takes anything for granted, and for the orchestra too. Everything could be different, and so I like that challenge, but heaven forbid that should happen because we have a wonderfully rehearsed cast now!”

The cast also includes Elizabeth Llewellyn, making her ENO debut as Mimi, and Stephen speaks with some pride at the occasion. “We want to give these young people a chance. I came in early for this opera, so that we could find interesting things in it with Elizabeth, and we have had a wonderful time together. It’s always a proud moment for me to be involved in somebody’s first operatic performance.”

When I move on to ask him what the challenges of conducting Puccini are he exhales for a long time and laughs again. “I wrote an article for Opera News in America on finding the right tempo in Puccini operas. I wish they’d given me Bellini because those are really hard! Today we have some iconic recordings of all these pieces, and because they sell, they’ve been recorded over and over again. Sometimes, rather like with Glenn Gould, a lot of those recordings happen in a studio, and in a studio you can do whatever you want. Because it’s a magic orchestration you can play with this, and play with that, you can slow things down and make them really pretty, and that’s fine. That’s the standard that most people listen to when they buy the record.”


He moves on to discuss tradition and tempo. “The first one I heard was the famous Thomas Beecham recording, which starred great but perhaps not the most theatrical of singers. On the other hand if you listen to the old recordings with Gigli, or Toscanini, you find they are rather unfashionable because it’s ‘too fast’. But they have an urgency, and the one thing Puccini does have is theatre. They’re not so hard to direct because everything you do is dictated by the music, and so if you play things as much as possible in real time then they really work rather well. The problem is people want to luxuriate in the ‘sticky toffee pudding’, and I find it rather difficult sometimes to get people to find the rhythm, the crispness. I keep saying this is like a Rossini finale, everything has to fit like a clock within this incredible sonic velvet, but it’s easy to just go for the velvet. Conducting Puccini is always a challenge in this sense.” 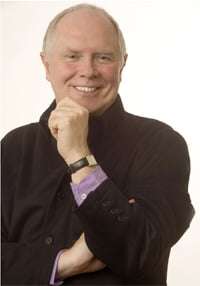 He is enjoying a run with this composer. “I just did Tosca at the Lyric Opera in Chicago, and it’s a great opera company with a huge Italian tradition. I had a totally new cast for that production, and the critics were gaga because we played it for the theatre. I was very pleased with it, and me being a strange American with a strange name, when I do it with Italian singers they say, ‘how do you know our music better than we do?!’. It’s not that I know it better at all, but I do love the theatre of it, and that’s the key to it. Conducting Puccini is such a challenge because it’s so popular, and everyone has their own idea of what it should sound like, or what it should look like! But in La bohème, if you think about it, maybe those people [the opera’s characters] aren’t so rich, and maybe they’re not like the dinosaurs they sometimes convey in it, you know? Maybe they have fun together! We do when we’re performing it, I mean this is theatre. This is not Bach, it’s Puccini – he was a composer for the theatre, not the concert hall!”

Lord is an energetic presence, highly enthusiastic about the first stage rehearsal the cast has just completed. “It’s a difficult set for the conductor because they’re often so far away upstairs. I look for peoples’ eyes, mouths and stomachs! I want to see when they breathe, how long the note can be held judged by the look of panic in their eyes or not, and we all want to breathe together. It’s challenging, but as long as it works at the end, then who cares?! We’ll just try to do our job. Because it’s a revival the orchestra time is short, and that’s also a challenge. It’s always fun though, it’s like Jell-O, you have to kind of mould it and then you have to hold on to it. Maybe that’s the best, rather than to worry too much about what Beecham or Karajan did.” Audiences have changed since then, of course. “Yes they have, and we’re doing it in the vernacular too. My training was in St Louis, where they do everything in English. I’d rather have a singer in a language they understand, rather than have them sing a lot of nonsense. These composers knew how to write for English – Weber wrote Oberon in English, for instance – so they knew what they were doing.”


Miller’s setting, in 1930s’ Paris, gets the thumbs up too. “It’s about a whole bunch of people who don’t have any money – and really that could be anywhere! It’s about a lot of people whose circumstances are somehow beyond them, and that’s what brings them together. This version as opposed to Leoncavallo’s, which was watered down for the women characters who are in some ways very loose! I suppose we don’t really know that Mimi is a woman of easy virtue, but she’s come back to a love that she knows, that doesn’t involve money. And today, maybe that’s not a bad lesson, with everybody struggling as they are!”