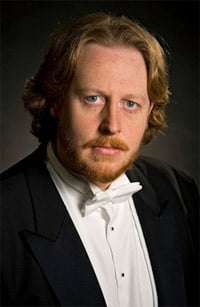 This season at English National Opera is a remarkably intense one for bass-baritone Iain Paterson, who, not content with singing and performing the role of Mephistopheles in Gounod’s Faust, is also cast as the lead role in Don Giovanni. Yet when we meet he is an energetic presence, seemingly thriving on the demands place upon him. “It’s been a long season so far”, he says with graceful understatement, “and there has been quite a lot of overlap between the shows. We opened Faust on a Saturday night, and on the following Monday we had rehearsals for Don Giovanni. It’s been like that all the way through, with that overlap between them.” Has he found that particularly difficult? “Yes and no”, he smiles. “The tiring thing about it is the size of the roles, I was onstage for a lot of Faust, and there was only about half-an-hour that I wasn’t in. There was lots of standing around, devilishly observing things! So consequently I was called to every single session for that for weeks, and then because we were losing time on Don Giovanni, I was called for pretty much every single rehearsal for that when Faust wasn’t on. So it’s been pretty full on. I went on the wagon for a month with the healthy life style, eating the rabbit food and the five-a-day, trying to keep myself healthy, and touch wood I’ve made it through!” 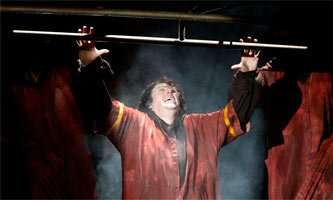 But shouldn’t Paterson be allowed to cut loose, playing as he is one of opera’s great womanisers? “Onstage, yes. Off-stage it’s a big old tiring sing, and you’ve got to look after yourself. I think the heyday for bad behaviour among actors and singers is long past, as audience expectations are now much higher. Generations that have grown up going to the cinema and watching television expect realistic acting onstage, and these days a far greater investment. You’re expected to be far more mobile and energetic, whereas in days past it used to be about the beauty of the voice. You’ve got to have so much more these days.”

In his research for playing the Don, Paterson reveals a wide range of source material. “I’ve got more recordings of Don Giovanni than any other opera – about ten. I started out as Musetto many years ago, and then did quite a long stint as Leporello, so I’ve got to know it that way too. I’ve got the Abbado recording of it, and Bryn Terfel’s Leporello is just sensational, I think it’s hands down the best recitative I’ve ever heard, and because I’m a big Bryn fan I rather like his Don as well. So my ideal recording would be Bryn Terfel and Bryn Terfel! There are others, going back to Nicolai Ghiaurov, who was an unlikely Don, and of course Cesare Siepi.” Iain’s thoughts on range are clear. “Generally I prefer lower voices in Mozart. You often find the Count and the Don are cast with high baritones, but what’s unusual about this one is that we have three basses and three sopranos. We have Brindley Sherratt as Leporello and Matthew Best as the Commendatore, and then with the three ladies we’ve got Sarah Tynan as Zerlina, Rebecca Evans as Donna Elvira and Katherine Broderick as Donna Anna. There’s no middle ground, no ‘mezzo ground’, if you like! It’s a huge privilege for me to be singing with all these people, I think it’s going to be fantastic. The find of the cast I think is going to be Katherine; she is sensationally good as Anna.” 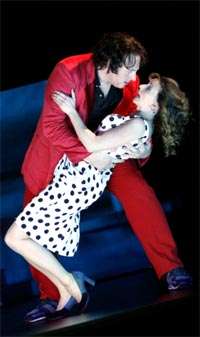 The translation, by Jeremy Sams, is a new one. “As with all translations there’s a bit of to and fro”, admits Paterson, “but Jeremy’s been very good at accommodating us. In terms of idiom it’s modern, there’s not a lot of florid language in it, but anyone who is familiar with his translation in The Marriage of Figaro, or Figaro’s Wedding as it’s called, won’t be disappointed, as it has all his trademark witticisms.” Given his part’s roguish qualities, would Paterson even be permitted to use a Scots accent? He laughs loudly at the thought. “No. I’m not! The temptation was there, and we did have a rehearsal where we tried everyone’s accents, because we’ve got people from all over the country. John Molloy, our Musetto, he’s from Northern Ireland, Rebecca is Welsh, and Sarah is from the East End, so we had a day where everybody sang in their own accent.” Ultimately the idea did not catch on. “I don’t know what the problem was, but it was very quickly decided that I should not sing in a Scottish accent!” Paterson seems relieved, however. “I’m generally not a fan of singing in accents. When we did Sir John in Love here I had to do the accent of a Welsh parson. The accent is written into the way Vaughan Williams composed it, but thankfully we had a few Welshmen in the cast who set me straight. One of the problems growing up with such a strong accent is you spend so long trying to get rid of it. If it’s not meant to be there, people don’t appreciate it if they hear it.”


This production will also mark the ENO debut of conductor Kirill Karabits (conductor of the Bournemouth Symphony Orchestra, who Paterson refers to warmly. “Kirill’s fantastic. We started out and had a chat about what we wanted to do with the recits and the musical numbers, and the tempi. Because of the way the production has developed it has become clear it would be easier with a faster tempo, and he’s been very generous about that.”


Rufus Norris, the director, has had to make a few adjustments, too. “Rufus was saying how in straight theatre you have the preview weeks, where you have an invited audience and you hone the show, and then you have your first night. You don’t have that in opera – you have a few stage rehearsals, a few dress rehearsals, and then on you go. For him it’s a big adjustment to give up that week of tweaking, but we tend to preserve our energy and try to ramp-up the energy towards the opening night, so that if we judge it correctly we arrive at our peak performance.”

Over the course of our conversation it becomes clear that Paterson’s biggest enthusiasm in opera is Wagner. “I think because the pieces are so long, and because the characters are so well drawn, I think you get far more psychological depth to the characters than in something like La bohème. If you think of Act Two of Götterdämmerung, it’s just extraordinary the journey the characters make. There is this huge development, especially with someone like Hagen. I used to sit in the library at university and listen to it for hours, and I’ve always liked heavy metal, so I think it’s maybe the heavy metal of opera. There is something strangely, deeply romantic about it. Wagner is one of the few things I will go and watch if I’ve got a night off.”


Referring back to the two productions in which he has been involved in the past month, Paterson talks of the unusual take on Faust, realised by director Des McAnuff. “It’s not what people would have expected, but equally it’s not a ridiculous concept to base it upon, the idea of the physicist who helped to develop the nuclear bomb, seeing the effects of his work and not being able to live with that, and wanting to go back to his past. It’s not such a bizarre concept, and it fits quite closely with the actual idea. I think in that sense ENO are very good at finding exciting directors to work with, and in Rufus Norris I think they have found one of the stars of the future.”


Regarding Don Giovanni, he is aware of the potential to split opinion. “I think people will be divided, and anyone turning up to see tights will be disappointed. It’s definitely not a traditional Don Giovanni in that sense, but in terms of telling the story and the development of the characters it’s very traditional. I think the way he has set a path through the story and set it up, it is going to be as clear as any production you’ve ever seen. The visuals I think will be a surprise to a lot of people, but I think they’re fantastic.” Without giving too much away, what will he get to wear? He smiles broadly. “I get to wear lots of fun things, none of which are my own! I never have my own costume, which is a nifty idea that Rufus has come up with. As to why, you’ll have to come and see the show! If we’ve done it right it will be fairly clear early on. I think it’s a fresh approach, and the one thing he’s found that is so lacking in Don Giovannis that I’ve seen lately is humour. The best tragedies also have comedy I think, and Da Ponte and Mozart knew what they were doing! There are some moments in Don Giovanni that really should be laugh-out-loud funny, and I think he’s really found them. Correspondingly, when it gets dark, he’s not afraid to go there either. I’m really excited by it, and it’s possibly going to be a ‘marmite’ production, our code for not knowing if people are going to like it or not, but I think it will win quite a lot of them over.”