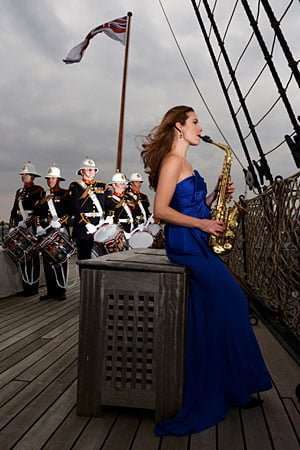 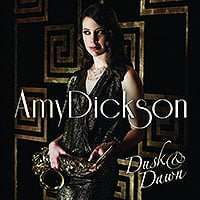 I met saxophonist Amy Dickson on 19 March this year (2013) at Sony Music UK’s offices in West London. A cold and snow-threatening day, which was a far cry from a year previously when the UK was experiencing a balmy spring feel and an even farther cry from the Australian summer that Amy had just left – returning to England for both the release of her third album, Dusk & Dawn, on 29 April and for her ‘second’ marriage of the year to fellow musician James Barclay (one in Australia, and then in London).

So, did the weddings inspire the CD or the ideas encapsulated in the CD inspire the weddings? Inevitably, subconsciously if not consciously, every album she has made has been inspired by what has been going on in her life at the time: “The first album was Smile, and I had just met Jamie, and I remember putting the ideas together when I was in Sydney and we were apart for a few weeks. I really missed him and that’s exactly what that album is all about – it’s all the songs that really touched my heart.”

This latest CD is a bit of a hotchpotch that puts Vincenzo Bellini in one corner and Hoagy Carmichael in the other, with Gabriel Fauré, Jerome Kern and Tom Waits. So, what is the glue that holds the album together? “We were trying to capture this one soundworld for the entire album. When we were putting the tracks together, even though they are very diverse I think they are all brought together by this one soundworld – the film music of the 1960s.”

Amy clearly feels passionately about the genre: “I was listening to the original soundtrack of The Thomas Crown Affair and it was so beautiful and elegant with the shimmering strings and the alto flutes – it was just stunning. I thought that if I was going to do a really diverse album, which you are going to do as a saxophonist – it is just the nature of the instrument – to pull it all together we tried really hard to capture this same sound. James McMillan, the producer, was fabulous at that, and he booked Angel Studios, in Islington, which was used to record a lot of those sound tracks. That studio contributed much to achieving the right sound mainly because of the wood panelling that is there.”

This is more than just a nod to the musical style of the 1960s: James McMillan used microphones and amplifiers from the period to be sure of the authentic feel of the album, and it works well. Of course, the fantastic arrangements help; Chris Walden, perhaps best known for his Big Band and work with artists such as Michael Bolton and Christina Aguilera, is responsible for many of the tracks, but Amy is no mean arranger herself (she transcribed Philip Glass’s Violin concerto and some of John Tavener’s The Protecting Veil – both recorded by Amy in 2009), so I wondered how the relationship with the arrangers worked on the present release. “This CD was highly unusual for me. Usually, I am really involved, but for this one they gave me the sheet music and said do what you want with that. With this kind of music you can. It is mainly to do with interpretation – some of it more than others.”

Tom Waits’s In the Neighborhood is one of the tracks that has strayed far from the original but retains the key ingredient – a great tune: “It was mostly done by James McMillan – Chris did the string parts and James came up with the rest.” The breathy opening for just piano and saxophone reflects on an age gone by: “it’s me doing Stan Getz I guess,” Amy laughs. 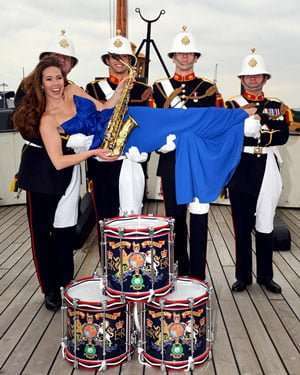 Another gem is found in Nan Schwartz’s arrangement of Skylark. Schwartz quotes at the start from Debussy’s saxophone Rapsodie: “On the album, Skylark comes immediately after ‘Dr Gradus ad Parnassum’ (from Debussy’s Children’s Corner) and so it goes Debussy and then Debussy-Carmichael. I used to play ‘Dr Gradus’ on the piano when I was a teenager so it was fun to try it on the saxophone.” Amy has played the sax from a very young age: “It was huge and I used to have to sit on a chair and rest it on my ankle and a pillow.” Did she not consider the soprano sax? It is certainly smaller. “Don’t put that in the hands of a child! It is so out of tune.”

Even though the saxophone has been used in classical orchestras for well over a century it is still considered by many to be mainly a Jazz and Big Band instrument. I wondered if Amy had had the experience of playing in jazz ensembles: “Not so much anymore, but I certainly grew up playing in bands. I had a very diverse musical education. I was still a pianist until I was 20 – that was my first instrument. On Friday nights I would play in a band and on Saturday I would play harpsichord in a baroque orchestra. It was really diverse. I grew up on the northern beaches in Sydney and there was surfing-rock on the radio all the time and my parents listened to the Doobie Brothers. I would practise and listen to classical music for many hours a day.”

Her first album, Smile, and this current one are both melodic in character. Is there a theme developing? “No, but I think I will always lend a little bit of that to whatever I do; I like lyrical expressive stuff” citing American saxophonist Michael Breckeras as a major influence. Brecker, who lost his fight with the blood disorder Myelodysplastic syndrome (MDS) in 2007, is remembered for the sultry sax solo on Paul Simon’s Still Crazy After All These Years as well as his many performances in the Saturday Night Live band in the 1980s.

Do composers that write for you take on board this lyrical style? “It’s really interesting as I find that it’s happening quite a lot. I strongly believe that I should not ever limit what the composer wants to do. I have allowed composers to write right up in the gods and very fast music and had to practice that little bit or a little phrase for months to get it right because it was previously impossible for me. Technically I always want try new things and sometimes, where things haven’t been done before, say okay – I will try that. However I find that my personality is reflected in the phrasing of things and just the general feel of a piece.”

Amy has been in the UK for the release of the CD on 29 April. This is a very busy time for her but she appears relaxed and completely in control. Her fiancé must be very understanding? “Yes, he is one of the most chilled-out guys in the world – I am sure it’ll be fine and we’ve done it before – we’re old hands at this wedding thing now. I have got the dress and all of the main things have been done.” This is going to be very different from the Australian ceremony in Sydney: “two days before the wedding it was 43°C, but, fortunately, it cooled, and on the day it was only 27°C, so we were very lucky. We had a sandstone church for the ceremony, and then went to the beach for photos. On that beach there is a beautiful restaurant where we had the reception.”

Once the wedding is out of the way, what are the plans? “I’ve got quite a few concerts in the next few months to promote the album around the UK, then I will be going to Europe and then back down to Australia and New Zealand. We’ll be releasing the album in other territories.” And, after the wedding – are you going away? “We’ve already had a big honeymoon so we’ll probably go to France for a few days.”

Amy came to England to study at the Royal College of Music when she was 18. Now she has married an Englishman – clearly an anglophile, what are her English connections? “I grew up in Australia but I don’t think I ever felt completely 100-percent like I belonged to that culture, although I love it dearly and I spend quite a few months of the year there. My ancestors all came from England, and there must be something somewhere that makes me have an affinity for England.”

And English music? A delightful arrangement of Walton’s ‘Touch her Soft Lips and Part’, taken from his music for the 1944 Olivier-directed film Henry V, is heard towards the end of the disc, but is she familiar with other saxophone music from the same period? How about Ronald Binge’s Concerto? “Yes I have played it a few times. It is gorgeous! The second movement is incredible. I would love to record that and Eric Coates’s Saxo-Rhapsody one day. There are a few other things of exactly that ilk that one-day I will put together on a disc. There is some Turnage as well. I have also played Birtwistle’s Panic.”

Amy is an ambassador of The Prince’s Trust and the Australian Children’s Music Foundation. Charitable work is dear to her heart. “I’ve had more to do with the Australian Children’s Music Foundation than The Prince’s Trust, but I am starting to do more for it. For my part it is the giving of concerts for the charity. Various projects are being planned for the Foundation – it goes into schools and prisons in very under-privileged areas and finds that the introduction of music into these societies has an enormous impact on the reduction of crime. You never know what an audience takes from a performance. This way you feel that you are really giving something back. I love it. What a privilege to be asked to do that.”

Amy is a true delight; her passion for her music is infectious and her technique effortlessly flawless. Her latest album Dusk & Dawn is an introspective consideration for saxophone of music from the Classical, Jazz and Popular repertoire.