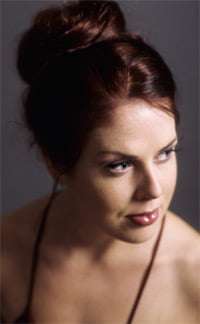 Sun or shade? “Sun every time for me. We don’t see enough of it in this country.” So it is that my conversation with Opera Holland Park’s latest principal soprano unfolds by a newly-planted flowerbed just outside the thousand-seat auditorium. It is no great surprise that Anna Leese is so much at home here; after all, it’s an open secret that she has joined the likes of Amanda Echalaz and Elizabeth Llewellyn as part of Opera Holland Park’s elite soprano ‘family’. “I particularly like the lack of snobbery in this place. Everyone who works here is so down to earth.” A diva in the making she may be, but the fast-rising young singer is refreshingly free of the baggage we tend to associate with that word.

Not only did her performance as Biancofiore in Zandonai’s rarely-performed Francesca da Rimini earn Anna an award as best supporting female artiste at OHP 2010, it also prompted invitations from the company to return this year and next in a mouth-watering pair of leading roles. Mascagni’s opera L’amico Fritz (which opens on Friday June 10) may not be as ubiquitous as the composer’s perennially popular Cavalleria rusticana, but the character of bride-to-be Suzel is a gift for a youthful lyric soprano. Anna will then return to Holland Park in 2012 to sing Tatyana in Tchaikovsky’s Eugene Onegin – a role she first sang in 2009 in her native New Zealand, and which she revisited in February of last year for Flanders Opera.

This new production of Fritz is directed by Annilese Miskimmon and conducted by Stuart Stratford, two more OHP regulars, and will be set in the 1950s’ New York of Cary Grant and Doris Day, or perhaps even of TV’s Mad Men. Anna is recovering from a badly-timed cold – “although it could be worse; at least I’m getting it out of the way now, before we open. It doesn’t help that I’ve had to work seven days a week in the run-up, because I’m also at this year’s BBC Cardiff Singer of the Year competition. That falls smack in the middle of the run of Fritz so I’ve been preparing for Cardiff at the same time. I’ve had to skip the Song Prize option because it clashes with our performances here, which means that my first taste of the competition will be the concert at St David’s Hall on June 13. Fortunately I’ll be singing music I know well, so it hasn’t involved too much extra preparation, but it’s still been tough to juggle two simultaneous commitments. I’ve managed to do it without skipping any rehearsals at Holland Park.”

As a proud New Zealander, Anna grabs every opportunity to return to her homeland and work alongside her compatriots. “The problem is there’s only really one opera company [New Zealand Opera], so I have to travel to where the work is.” She’ll be dipping a toe in Wagnerian waters soon in New Zealand, a concert performance on 29 July in Auckland – with her first Freia in Das Rheingold (link below). “I’m mapping out my career carefully. I’m aware that my voice has only just lost its girlish tone so I’m looking ahead to roles that are going to suit my changing vocal quality. I’m quite keen on exploring more of the Slavic repertoire, and then it’s on to Puccini and Richard Strauss. I find that people often try to draw parallels between me and Dame Kiri Te Kanawa, because we’re both from New Zealand, but really our voices are quite different. Even now I’m looking at roles that Kiri would not have sung.”

Despite the whirlwind of her early career, Anna seems unfazed by her growing reputation. A glance at her daunting schedule is enough to explain why: she barely has time to draw breath, let alone savour her successes. She has learnt the hard way how important it is to factor a degree of fallow time into her diary, even when planning engagements two or more years ahead. Nevertheless, when she looks back there is one honour that she treasures above all: the creation of the ‘Anna Leese Rose’ – an original bloom that was bred in her honour by Tom Varruth of Weeks Roses in California. “It’s still quite rare because they can only farm six new plants at a time from a single bush. But gradually it’s making its mark.” The same can be said for Anna Leese herself.