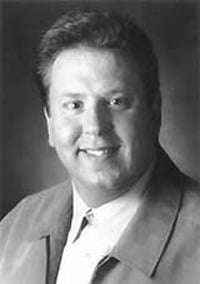 Surely an international Verdi specialist named Bruno Caproni should not have a Northern Irish accent? “It’s always a big surprise for people when I open my mouth to speak for the first time. I was born in Bangor, County Down, and that’s where I grew up. My family originally hails from a small town called Barga just outside Lucca in Tuscany; it’s known as the most Scottish town in Italy because the majority of Italian immigrants to Scotland came from that one town. It’s twinned with East Lothian! My forebears lived in Scotland for 10 years and then moved to Northern Ireland in the early 1900s. But my life’s come full-circle and now I live in Barga, back in the family home.

“When I was growing up, while every other kid was playing outside or watching television we were eating Italian food and playing Italian music. I have vivid early memories of my mother sitting me on her knee listening to Tosca or La bohème. Everyone has an idea of what they want to be when they grow up; my wish was always to sing Verdi as a baritone, and so it was. I started with roles like Marullo [Rigoletto] and then moved on to the major Verdi roles. I must have sung fifteen or sixteen now, but this will be my first as Simon Boccanegra. It’s great to come to this one now because it’s the one most baritones would say is their favourite role. The music is glorious and the character is so interesting, torn as he is between politics and family. You can see why Plácido Domingo chose it as his first venture into the baritone repertoire.”

I’m glad that Bruno has raised the spectre of Domingo first. I ask whether memories of last year’s high-profile Royal Opera staging loom large over the present ENO production. He shakes his head. “That was a classic setting, whereas ours is an updated production. It has been a wonderful experience so far, although at the beginning it took me a while to settle in. Dmitri [Tcherniakov, the young Russian director] is very intense. We went through an interpreter, who did a wonderful job, but Dmitri has ideas that are not always translatable into English. He likes to tell you something once and expects it to stay. Eventually there was a bit of give and take and now we’ve got quite fond of each other. I’m doing my best to interpret his ideas.”

How does Bruno Caproni go about preparing to perform a role like Boccanegra for the first time? Does he start from the notes or does he think about the character first? “A bit of both, but most of all it’s the text. I like to get that learnt and build up from there. I establish a picture in my mind of what I’m singing; I’ve seen Simon Boccanegra many times so I have an idea what it should be. You get it into your head and into your body as well – which can be a hindrance when the director has other ideas!”

So does he worry that this Tcherniakov production is going to be hard to shake off next time he plays the part? “No, because so many other productions I’ve done have been way-out! My first La traviata in Germany was all set behind gauze; I had to stand behind it with a stick, not moving, for the entire duet with Violetta. It just closed me up to the role. An experience like that gets right into your body. With this Simon Boccanegra, though, we first had to grasp what Dmitri wanted and then work it in with the music. I think we’ve got to a good stage now. Dmitri does have a slight twist in his interpretation of the reunion between the father and daughter [Boccanegra and Amelia, the latter sung for ENO by Rena Harms]; it’ll be interesting to see whether that comes across.”


Our conversation turns to the current, controversial ENO season. “I loved The Damnation of Faust, which I’ve seen twice. I haven’t had a chance to catch the Britten [A Midsummer Night’s Dream] yet, though, because I’ve been too busy with [Boccanegra]. But I will make a point of seeing it.” Does Bruno think audiences will be comfortable with Tcherniakov’s take on Verdi’s opera? “Well, there’s nothing outrageous about it at all. It tells the story. With some productions I’ve been in, people ask ‘what did such and such a thing mean?’ and there’s no answer! But there’s nothing weird or offensive about this one, even though it’s been brought forward to the modern era. Boccanegra is a great character but there’s a certain passivity about him. He’s the still heart of the opera – the nice guy around whom the action revolves. Although you’re always focused on him, he responds to circumstances rather than setting up the action. One of the things Dmitri has done is bring him to the centre.”

Bruno Caproni is happy to be known as a Verdi specialist, although he’s far from a one-trick pony. “I’ve particularly enjoyed singing Frank in Die tote Stadt and Jokanaan in Salome, and I must be the only baritone alive who has sung two major roles by Alberto Franchetti: the title role in Cristoforo Colombo and a wonderful opera I sang in Berlin called Germania. There have always been plenty of opportunities that divert me from the mainstream. Verdi, though, is the major part of my life; it’s just turned out that way – one gets known for certain roles. Rigoletto crops up a lot, of course. I’ve already sung it once this year, and as soon as this production is over I’m off to Sao Paolo to do it again for the re-opening of the Teatro Municipal. One follows the work – especially today, with so many theatres in crisis, not least in the US.”

Are there any roles Bruno Caproni still hankers after playing? “None really. There was one, but I’m doing it now – Simon Boccanegra!”