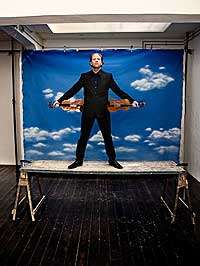 11 January 2010. Only a few minutes later than agreed, Daniel picks up the phone in his Hamburg home, where he lives with his wife, double bass player Annika Pigorsch. “I was stuck in the snow on my way back from Berlin,” I am apologetically informed. Considering the recent weather conditions in Europe, and then the fact that Hope needed to travel over 150 miles to his home, that he is only a few minutes late is miraculous. For this tirelessly driven musician, writer and, now, TV presenter, it seems that there are few things that appear to thwart him.

Born to South African parents, Daniel Hope left South Africa when he was six months old. His father, the author and journalist Christopher Hope, was fiercely anti-apartheid and, after his poetry infuriated the authorities, the family moved to live in Highgate rather than bring up Daniel and his brother in a racist society. At the time, as it is now, the London borough was a magnet for artists of all kinds. Distinguished violin teacher Sheila Nelson was one such neighbour who had a lasting impression upon the young violinist. “She insisted that the first thing all her pupils did was learn to improvise”, recounts Hope, “it removed the fear of not having the music in front of you, allowing you to find your feet.”

The improvisational bug continues as Hope’s repertoire regularly includes Jazz and Indian Raga in a style that shuns flamboyance in favour of something much more thoughtful. “Indian music was a huge eye and ear opener to me”, says Hope, who spent several years studying the basic traditions of Indian music in preparation for his East meets West recording. “To understand what is going on in the music helps you to see how rich that musical language is and how the improvisation works.”

Hope’s foray into the world of Indian music is far from a recent encounter. As a toddler, Hope’s mother Eleanor was at first the secretary and then the manager of Yehudi Menuhin whose friendship with Ravi Shankar, and subsequent performances with the master sitar player, clearly had a lasting impression on the young Hope. The violinist recounts listening to them play when they met in Switzerland and when subsequently Hope decided to record the music that Shankar and Menuhin had set-down in the 1960s it was only natural to ask if Menuhin (who died in 1999) minded. Of course he didn’t, but warned that much study would be required. Several years of that followed. 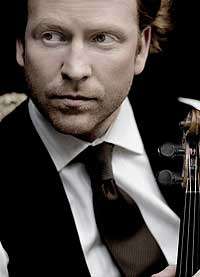 Menuhin, another of Highgate’s famous former inhabitants, was almost certainly the reason that Hope took up music whilst very young, announcing at the age of three that he wanted to become a violinist. Though never a pupil of Menuhin (Hope studied with Russian violinist Zakhar Bron) at the age of sixteen Menuhin asked Hope to come and play for him and subsequently he went on to perform some concertos on tour with the old master.

Hope loves to work with great musicians and tends not to draw a line between classical musicians and those of other genres. “To know about other styles of music enriches the musical experience regardless of whether you perform it”, sounds like the mantra by which Daniel Hope lives. The search to work with musicians that inspire him led to an opportunity to work with Sting (another Highgate inhabitant who, coincidentally, bought Menuhin’s house) in a concert in Baden-Baden (southern Germany) last December. This wasn’t the pair’s first meeting as Hope played extensively on Sting’s recording, If on a winter’s night, released last October. How did he find performing with the former Police front-man? “It was a huge thrill for me working with Sting; he is a musician that I admire very much”. He continues to explain how he finds it exciting meeting with other musicians from different musical backgrounds: “I have my ears open as wide as possible, and try to learn from them.”

The apparently indefatigable Daniel Hope returns to London – a place he describes as his home and the place where his strongest memories are – on 18 January. In an all-standing concert in the Elgar Room at the Royal Albert Hall he brings an idea that is particularly popular in Germany and Japan to the UK. The concept is known as The Yellow Lounge, which was started by Universal Classics in an attempt to bring classical concerts into venues that are not usually associated with classical music. The first Yellow Lounge was held in Hamburg in 2001 and it is clearly something that Hope is very keen to see become popular in the UK. In Germany there is a DJ that plays classical music, a bar and a live act, though Hope is unsure quite how similar the inaugural event in the UK will be. “They have been incredibly successful in Germany”, Hope enthuses. “In Berlin, you can get sometimes up to a thousand people crammed into a club. You talk about the music, you play it and you get a direct response.”

It is, for the Albert Hall, not dissimilar to the idea behind the Promenade Concerts though on a much smaller scale. Hope agrees wholeheartedly: “that’s one of the reasons I think that this kind of concert belongs at the Albert Hall. I think that it is lovely that they have called it the Elgar Room as well which gives an extra English touch to it which only the Albert Hall can have, being such a unique venue.”

Hope has not seen the Elgar Room yet but expects that there will be a small stage with people standing all around. In previous concerts he has had people literally sitting at his feet while he is playing; potentially disconcerting but Hope’s enthusiasm to communicate the wonders of music is infectious. “You’ve got this great tradition associated with the Albert Hall, and if you take that tradition with all the great players that have played there and then you open up the venues and you’re still putting on good music but mixing things up with different styles and genres, I think it can only be good.”

The concert, entitled A Ba-ROCK Explosion, looks at the different cultures and styles from different countries through music of the baroque and late-renaissance periods. “It was such an exciting time in music”, says Hope, “you had the so-called new, the Violin, and people were reaching out to violinists to write for the instrument. They needed music as entertainment, for dance and for royal occasions; there was a kind of explosion in terms of creative output during that time and, as a violinist, that is very exciting to see.”

In a concert room that houses only three-hundred people, the experience will certainly be intimate. How does Daniel Hope anticipate the make-up of the audience will be? “I am hoping that people who come to this concert won’t necessarily have been to concerts before. I want them to experience the music up close and hopefully come back for another performance”.

With the snow still deep outside my window I wonder if Daniel will manage to get a plane out of Germany. “I’ll be flying in late on Sunday to ensure that I am there on time.” I am reassured to hear that the adverse weather conditions that have managed to cripple the UK for a couple of weeks will not get in between this extraordinary artist and the music that he holds so dear.