The composer Gabriel Jackson has just reached his half-century, on 10 July 2012 – still a reassuringly young age for a classical composer. He has fared comparatively well in the recording studio too, with a second volume of his choral music, Beyond the Stars, recently released on Delphian Records. Featuring music composed for the Anglican cathedral of St Mary’s in Edinburgh, it cements a close relationship the composer and cathedral choir have enjoyed. 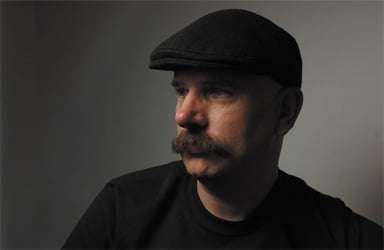 When we talk my first observation to Gabriel is how listening to the disc on headphones brings through the wide sonic range of his writing, from high treble to extremely low bass. He is pleased to note this. “Headphones can expose things. It’s very hard to know when you’ve been really involved in the recording, as to how it sounds to a new listener. The choir used a front jib microphone in the recording which I think worked.”

The composer was present for the sessions for the new disc. “We had two groups of sessions. I’ve worked with the choir on and off going back twelve years now, so it was nice to be back and to be around, especially with one or two people who are still there. It’s an amazing place.”

All of the pieces were written with the St Mary’s Choir and church building in mind. “Absolutely. The music director Duncan Ferguson wanted something new and specific, for the choir to be at the centre of. I know the building, its acoustic and the place very well; for me it has a particular intensity and brightness. I know what they like, so it is nice to be able to tailor a piece to their soundworld and their personalities, to know what it feels like to be there listening. It’s a big, imposing building.”

Jackson wrote a Hymn to St Margaret of Scotland, which forms the centrepiece of the release. “I don’t know if it sounds specifically Scottish, but I wanted a neo-Medieval vibe to reflect the text, with something a bit ornate. I wanted to do something quite massive to reflect the building, an imposing piece. They liked all the glissandi, the effects that I put in to the hymn. It’s a hard piece.”

Jackson goes on to explain the role of the organ in his writing. “I was a very inadequate organist! If a choral piece has an organ part I write very independent parts, so that it’s doing something meaningful in the piece rather than just supporting the choir. I do love the purring underpinning of a 32-foot stop rumbling away under a very still piece.”

Choral writing is Gabriel’s first discipline as a composer, and reached a pinnacle in 2009 when he was asked to write the annual commission for the Festival of Nine Lessons and Carols at King’s College Cambridge. It remains a thoroughly enlightening experience for him. “The whole thing was quite amazing. I was expecting it to be a really good experience but it was extraordinary being there in the chapel. It’s such an iconic service being broadcast every year, the way it unfolds over time. From the first readings, it’s an incredibly effective structure, it gets darker outside and it gets more intense inside. It was an amazing occasion, a great thing to be part of. You cannot get a bigger audience for a new piece than that.”

The compositional process was relatively relaxed. “It was left to me. I ran it by Stephen Cleobury, but he was very open about it. The way he constructs the music is entirely based around the commissioned piece, and the Lesson it goes after. Then he chooses the music around it. He didn’t say anything to me in the way of guidelines apart from the fact that it shouldn’t be too long.”

Gabriel has a number of commissions to work on, the most current of which is from the Tallis Scholars in celebration of its 40th-anniversary. “I’m doing that at the moment. I’m not quite sure of when the first performance might be, but the idea is for them to perform it a lot. The text, which is Ave dei patris, was set by Taverner, Fayrfax and Tallis. I thought it would be nice to buy into the whole tradition of the early 16th-century, to set the piece around examples from the Renaissance.”

It is this period in musical history that Gabriel finds himself returning to. “I think Gibbons was an amazing composer. I was a chorister at Canterbury Cathedral and learned a lot about him there. The music that means the most to me is 16th-century English – Tallis, Byrd and Gibbons. I like the idea of following in their footsteps. A lot of the pieces I do are about specific models of an earlier tradition – like Louis Andriessen once said, all music is about other music. It’s a unique tradition we have in this country, and it must be amazing for a cathedral musician when they go to sing to know that 500 years ago Evensong would have been starting!”


While a lot of his music is written in thrall to the past, Gabriel has contemporary loves too – and proclaims his love of the music of Sir Michael Tippett. “He was the first living composer I became aware of. We made a recording at Canterbury in 1972 of several Tippett pieces. For me he is the greatest English composer since Purcell. Since he’s died things have gone a bit quiet, and there’s not the same network around him that there is around Britten. I love the ecstatic qualities you get in Tippett, the rhythmic qualities too. He was an amazing composer. Stravinsky’s music means a lot to me too.”

With two discs completed for Delphian, does he feel fortunate in the current recording climate to have such relatively strong exposure? “That recording was Delphian and Duncan’s idea, so I was really pleased to be able to do an update on the liturgical process. Fortunately people do want to record things quite frequently, but whole discs don’t come along every day. Next year there is a disc planned for Hyperion in February, sung by the State Choir of Latvia. I was delighted when they went for that. None of the discs entirely devoted to me were my idea, they’ve been someone else’s.”

Another marked influence on Jackson’s musical life – whether as a composer or as a listener – can be found in Soul and R&B music. “I suppose I like the singers, the sounds, and everything about 1970s R&B. I don’t try to imitate it, but aspects of it are influential to me – the chords, the spaciousness, the ecstatic, bright sounds, those things that come from listening to the backing vocals on something like a Luther Vandross record – and the incredible care in the way the chords are voiced, the way they sound – it’s a particular kind of intensity. When I started my first pieces were minimal, post-minimal even. I still use things with ostinato, not so much on Beyond The Stars, but I do from time to time. My interest comes from the way the voice rides the groove in a Soul record. When it comes to pop music I’m quite racist and don’t think white people can sing! Apart that is from someone like Michael McDonald. Sonically R&B music has more sophistication than a lot of rock music, I find it all fascinating. There is a lot of sonic imagination to be heard in R&B music, and it’s the 1970s that do it for me – The Temptations, The O-Jays, Earth Wind & Fire, and The Isley Brothers.”

We leave it there, with Gabriel Jackson into a groove on his love of Soul music. It will be interesting to chart how much this influence informs his music in the future, particularly his sacred music – of which Beyond the Stars is a striking place to start.