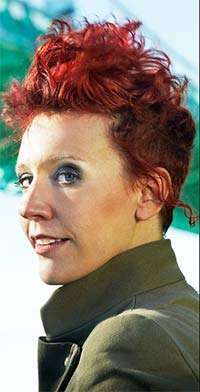 Bohuslav Martinů’s opera Juliette (originally written to a French libretto), coming to English National Opera (as Julietta) for the first time, is set in a dream-world – yet when I meet Julia Sporsén for Classical Source, the soprano singing the title role, everything is reassuringly real. It is Julia’s first encounter with this stage-work, and she is rather taken with Martinů’s ways of working. “It’s absolutely gorgeous music, and the story is so unusual for an opera, so it’s really worth doing. I think also that this production is very well done. Because of the subject matter, where it all takes place in a dream, it can be very confusing because there are a lot of characters, but the director Richard Jones – in a genius way – makes sense of everything, so you can really follow the story, confusing as it is!”.

Without giving too much away for first-timers, there is an element of repetition to Julietta, but Julia is not hugely affected by that. “It’s only really towards the end when you realise [that events are recurring]. There is also a sense that this is a world that exists with its own rules, so it’s not just like an incomprehensible dream where absurd things happen, but there is a sense of us being on another planet with different rules than [being on Earth]”.

While Julietta is the title role, it is Michel, for whom she is the object of his affections, who is seen the most. Does Julia therefore have to play her role in an elusive way? “One of the rules in the dream-world is that people have amnesia to different degrees, but that is something to relate to, so some people don’t remember anything and some people still have memories. When I started looking at the score and learning the role I was a bit puzzled as to how to approach a character that exists in someone else’s mind! Thankfully Richard treated it as he would any role, pointing out that you have a background story with realistic situations, so in that sense it’s been closer to a normal process.”

Despite the plot being somewhat farcical, there is a potentially serious message behind it, that of not forgetting the past. “Yes”, Julia replies hesitantly. “I don’t know so much about this as Michel is losing himself to the dream, and for a long time refusing that it is a dream, and in the end it is hinted that he will go mad if he stays in the dream. I think what I have experienced in the relationship between Julietta and Michel is that they fall in love with the dream image of the other person. That I think is something that you can relate to, but it also falls apart because of that. They have different stories of how they describe their relationship, and there are a lot of misunderstandings because they are not really communicating with the real person. So that is the core of the love relationship, but overall all the way through you can ask yourself what is real and what is reality, just like when you have dreams you feel things to be very real!.” The preview photographs of the sets for Julietta are truly striking. “It’s just stunning and it needs to have that abstract feel, but the combination of our process, which has been real in many ways, and the combination with the abstract set is brilliant.”

Julia has had opera in her blood nearly all her life, as both of her parents were opera singers. “I also had a grandfather who was a conductor, and my grandmother was a piano teacher. My brother is now an actor, and my cousin is a pop musician! I never had a process of discovering opera; it was just what grown-ups did when they went to work. I was there sitting in on rehearsals, and they were both permanent singers in Gothenburg Opera, so that was our kind of family. It’s very different now though, as it’s only freelance work really, but then it really was like a second home for everybody.” Julia’s parents did not push her towards opera – not too much, at least! “Not really, although they put me into piano lessons, and girls’ choirs, but as a choice of profession it was completely open about what I did, and they never taught me. That was absolutely my own choice.” 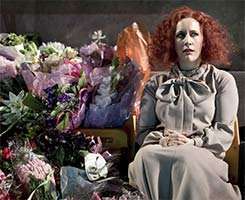 Julia has recent experience in contemporary music, having taken part in ENO’s Caligula, Alexander Goehr’s Promised End, and before that appearing in the collaboration between ENO and Punchdrunk in The Duchess of Malfi – “the hardest music I’ve done so far”. Quite a contrast, stylistically, with the Rameau she sung at college. “I have done lots of different repertoire, Donizetti and Carmen, Verdi too.” She also sings Lieder and has performed a one-woman show – Dreamlives – for the Liederkreis company in 2007. “It was put together by the director Sebastian Harcombe and the pianist Sergey Rybin. They were inspired in their thinking by Freud. It was Freud year, so we did a close circle of composers who were contemporary with him, and then created this story through these songs, through Berg, Richard Strauss and Schoenberg. They made up the general storyline, but then we created lots of things within that. It was an amazing thing to do. In the New End Theatre in Hampstead it was just fifty people, but you sang to people right up close. For an opera singer it was luxurious to come that close, to work with people in that way.” 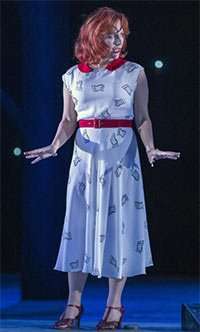 Is Julia aware of the audience when performing? “You are more aware of course in a small venue. In The Coliseum it is different. In The Duchess of Malfi [performed at Great Eastern Quay in July 2010], because the spectators moved around completely freely, they could come with you into a small cupboard, so you would have one person watching you up very close. That project was a complete PHD in controlling the audience, taking everything from them and completely adapting to that person. We did one-on-ones, where you take one person and do a scene only for them, so you have to be incredibly sensitive to that person and how exposed that situation is. You have to know how far you can go, and if you can get their confidence. You take something from The Coliseum as well, too, and that is on a big stage you have to be clear in another way.”

Julia has lived in London for eight years, with all her work in the city except for a Swedish debut earlier this year. “We will see for how long, but at the moment there is no reason to move back. For education London is great, there are the three big colleges, and it is such an international music city it draws people in a way that Sweden would not get in touch with. It is very competitive, though I came quite late – I had basic training and it was good for me to get a lot of showcases, opportunities and competition. If you are a bit earlier on it can be too much pressure. It’s an inspirational city for other art forms too, which I think is very necessary, for opera singers to be in touch with that. You should never be complacent in your profession.”

Future plans for Julia include a recording for Opera Rara of Belisario by Donizetti, which the soprano describes as “a small role, but I will be working with Mark Elder which I am looking forward to. The next big thing is playing Nedda in Pagliacci for Holland Park next year, which is a role I have wanted to do for ages. This will be the first production I do for them, and they are incredible, doing six productions to full houses in the summer.”

Returning to examine Martinů, talk turns to how the composer writes for voices. “I think like Janáček he writes really closely to the text; and he’s made two versions, one in French and one in Czech. They’re quite different; there are a lot of rhythm changes to accommodate the language and the range is sort of in the middle. That always has its own challenges.” Martinů’s melodic instincts are often different to Julia’s expectations, however, and she agrees that he is more daring a composer than people tend to give him credit for. Is it technically difficult to sing? “It depends on what you compare it to in contemporary music, as I think some of that is a lot harder. There is a process, absolutely, to learning it, and sometimes you feel your line is conflicting a lot to the music elsewhere, but compared to contemporary music it is not quite as challenging.”

I offer a description of Martinů as neoclassical, in a sense, but with a modern harmonic and rhythmic language. Julia readily agrees, but also notes that “it is difficult to put in to words! I think it’s absolutely tuneful and melodic, and it has amazing orchestral parts that are very rich and very colourful, but then it’s broken up by the spoken dialogue a little bit. Maybe that’s the nature of the story, but sometimes it changes very quickly, and at the orchestral rehearsals Ed Gardner has been talking to them very hard about what is happening in the plot. I think even for the orchestra it is confusing, it suddenly changes from something lush to something different, so they really have to know what is going on. There are a lot of different styles.”