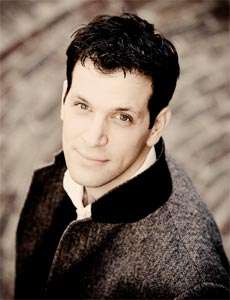 Although Luca Pisaroni appears more widely on the stages of opera-houses in Europe and America than in the United Kingdom, in recent years he has become a familiar face at a certain south-coast opera festival. On the day we spoke, the handsome Italian baritone was about to open in his third Glyndebourne production (and his first non-Mozart role there), playing the villainous Argante in Handel’s Rinaldo.

When the character first appears he has to come from nowhere to sing a massively virtuosic aria, ‘Sibilar gli angui’. I asked Luca what vocal preparations he undertakes before making his entrance. “You don’t have time to prepare. Its one-hundred miles an hour in two seconds! It’s an aria of fury! It’s about making sure you have all the notes so it sounds powerful. I do one thing to prepare: I play football with the stagehands just before entering! It’s so important that the whole body is warmed up before singing, not just the voice. I always wanted to sing Argante because of this aria, although I do find his second aria to be even more challenging. ‘Vieni o cara’ is much more difficult and has a completely different feeling because it expresses my character’s longing for Armida, so it’s somehow romantic. It’s a challenge to show these two sides of Argante in the space of ten minutes.”

Given the challenge, has director Robert Carsen shown consideration for the vocal demands when staging Argante’s first entrance? “Absolutely. He knows that this is where Argante makes his impact. We first worked together in 2004 on Alcina in Paris – a wonderful production. Robert had a very clear idea of what he wanted. For Rinaldo, we talked a lot about Argante; we tried to find the right colour for this character because when you’re playing the bad guy the border between real evil and comic evil is so tricky. You need to keep it believable, so that your character does not become a cartoon but is someone who has total belief in what he does.”

At the time we spoke, Carsen’s now-much-discussed ‘school dormitory’ setting had not yet been unveiled, so I was not able to ask Luca any specific questions about the production. Nevertheless, I remarked that the storyline of Rinaldo now takes some swallowing. Once ‘Sibilar’ is out of the way, does the role allow a singer to characterise the man? “To be honest I don’t think so. It’s a problem with the libretto. We first see Argante in these two arias, and the relationship with Armida seems pretty good; but then there’s a huge break in the role and the next time you see him he is in love with Almirena and is trying to seduce her. So dramatically it’s a little bit difficult. This opera is not Handel’s best because unlike Guilio Cesare, where all the drama works so well, this one is full of stop-go and dramatic changes of direction. But Robert has done a very good job of trying to give a sense to all this jumping around. I love his aesthetic: everything is beautiful and everything has a meaning. He tries to find the reason for each character’s actions rather than simply striving for an effect.” Argante is the only low-voiced character in the cast of Rinaldo. “I’m there to keep the bass-baritone flag flying! There’s no tenor, so there’s only me and the countertenor; the rest are female voices. It’s nice to be able to make an impression, especially with the first aria, because the colour of the bass-baritone voice is so specific.”

I first encountered Luca Pisaroni in Alberto Zedda’s recording of Rossini’s La Cenerentola, in which he sings the ‘fairy godmother’ role, that of the philosopher Alidoro, who also has an enormous aria, ‘Là del ciel nell’arcano profondo’. “I’m very happy because I’ll be doing that part in a few years’ time in the US. It’s a great role, not least because that aria is so challenging.” At present, though, the singer is perhaps most identified with Mozart’s roles, not least Leporello, which he sang last year at Glyndebourne in the Jonathan Kent production. Midway through the present run of Rinaldo, he will be flying over to Baden-Baden to reprise Leporello in a series of concerts that will be captured for posterity. “I feel incredibly honoured to be in a new recording of Don Giovanni. Mind you, it will be difficult going back to good old Leporello when I’m so tied up with bad guy Argante.” A glance through Luca Pisaroni’s Mozart repertoire reveals one significant gap: the Don himself. Does he intend moving across from playing servant to master, as so many others have done? His reply is surprisingly cautious. “At the moment I’m sticking with the Count [in Le nozze di Figaro] because I’ve only just moved across from playing Figaro and it’s a role I really like. I shan’t be singing any more Figaros because the Count is a role that really suits my voice, personality and physique. Don Giovanni? One day. But Giovanni is a very different role from Leporello: it eludes you. You think you’ve got it, then it escapes! I want to do it, sure, but only when I’m ready. When I do it I’ll want to bring something special to it.”

An intriguing project on the singer’s horizon is a new Shakespearean entertainment called The Enchanted Island, scheduled for the end of 2011 in, of all places, the New York Met. It’s a dramatic conflation of A Midsummer Night’s Dream and The Tempest, set to music by Baroque composers from Vivaldi to Rameau, in which Pisaroni will be joined by a galaxy of his peers, Danielle DeNiese, Joyce DiDonato, David Daniels and Plácido Domingo among them. “When they offered it to me I was doubly excited because it’s at the Met AND it’s in English. As an Italian it’s always nice when they ask you to sing in another language. I don’t like just to sing in Italian, because there is so much beautiful music in other languages. I was supposed to do John Corigliano’s opera The Ghost of Versailles at the Met but it was cancelled, and so when this project happened they thought of me. I met with Jeremy Sams and William Christie, who put it together between them, and they asked me what I wanted to sing – what kind of feeling. When I saw that I would be playing Caliban I was really excited: it’s always nice to be the monster! I’ll be singing three arias by Handel and two by Vivaldi.”

Does Pisaroni plan to move out of the classical and Baroque repertoire at some stage? “I certainly hope so! I am doing some more Rossini next year – Maometto II in Santa Fe next summer [2012] and Il turco in Italia after that, and then I’ll sing my first Donizetti opera, Enrico in Anna Bolena. I definitely want to explore the French repertoire and move into bel canto. I’m thinking about singing Faust, both Gounod and Berlioz, and eventually Hoffman. I know exactly what I want to sing so I need to see if my voice follows the path I want for it. The bass-baritone voice develops until you’re past forty (Pisaroni is 36) and I want to keep mine fresh and young-sounding for as long as I can. Soprano Mirella Freni moved from singing Zerlina and Susanna on to Tosca, Manon and Butterfly – and that’s the kind of path I want for my own voice. I try to do something scary every year – something that takes me forward; but on the other hand you need to allow your voice to develop naturally and not try to do everything too soon. I have a teacher because I believe in having someone to give you a check-up once in a while. I don’t see her much – she’s in Amsterdam – but whenever I take on a new role I always go and we work on it together. With her I sing roles I’ll never sing in the theatre – not yet, anyway. Verdi roles, for example. You cannot just sing Mozart and the Baroque till you’re forty, then start singing Verdi the day you turn 40. It’s a marathon, not the 100 metres! I’d rather do things a little bit later rather than too soon and not be up to par. If I start singing Verdi in ten years’ time I’ll still have fifteen years in which to sing those roles. Right now I can enjoy working with my teacher on, say, Simon Boccanegra, knowing that when I come back to it I’ll be on the right path.”

Following 2011’s Glyndebourne and Proms appearances as Argante, Luca Pisaroni returns to the UK “in a couple of years’ time at the Wigmore Hall. Song recitals are one of the things I really love doing. That isn’t typically Italian of me – we tend to do concerts of opera arias – but the literature of songs is so vast and it also helps me as an opera singer. It teaches you to describe a feeling and a situation in a concentrated space of time. Every song is like a little opera – you need to convey the situation, what happened before and what’s going to happen afterwards, all in a few minutes! It’s so challenging and there’s no filter between you and the audience. No costume or lighting – it’s just you. This is what I really enjoy: being able to communicate directly to the audience. I made my Wigmore Hall debut in March and it was fantastic. It’s so nice to see the reaction of the audience, which is something you cannot do in the opera house. It’s a part of my career I’m pushing to do because as an Italian it’s all too easy just to go from one opera production to the next. You’re not a complete musician if you don’t do concerts and recitals.”