Paul O’Dette, lutenist par excellence, received the warmest possible welcome to the Wigmore Hall (on Thursday 10 January 2013, review link below)) with its nigh-perfect acoustics, especially suitable for his instrument. The following weekend we met for lunch and talked. I was told of Paul’s early background and how he started his musical career playing rock guitar, and so became familiar with free improvisation in a quite different musical field.

I asked how he fell in love with the lute and, in particular, when he started to devote himself to the area of16th-century music. I continued: “How did you come upon John Dowland as a centre-point and your key to this repertoire?”. He replied “I started to study the classical guitar and among the first music I discovered was a collection of Italian lute pieces. I quickly learned them and found so much character and vitality in the music that I kept playing the pieces over and over again. But of course I was playing what were essentially lute pieces on the guitar. I wondered what they sounded like on the lute, and I found a Julian Bream recording of lute music actually on the lute, and at the sound of the first chord I was utterly transported. So I turned to my parents and said ‘I don’t know how I shall find a lute but I simply must do so’. So I went back to my guitar teacher and said I must play these pieces on the lute. He responded in astonishment (for the lute was little-known at that time) and replied ‘Well I own a lute but I can’t play it myself. If you’d like it I would be happy to sell it to you along with my library of lute music’.”

It was one of those remarkable coincidences in life only happening because he lived in that American city, Columbus, Ohio, in that moment. He was told how difficult the instrument was to play, and looking at it discovered in amazement that the strings on this lute were nearly two inches above the frets. He thought: “Surely that makes the instrument almost impossible to play.” But he found a local guitar builder who adjusted the height of the strings to very near the fret-board. He then learned how to read lute music in tablature from another book in his teacher’s library (a further piece of good fortune). Then came the most important find of all, a book of the music of the greatest of all composers for the lute, the Englishman John Dowland. “I continued exploring the lute pieces I already possessed, and went on to play more and more Dowland, alongside other music of his time. But I found Dowland was the most original, interesting and imaginative of them all.”


Eventually O’Dette began looking for other music by Dowland and discovered much hidden treasure. Often it was just labelled ‘J.D’; sometimes it was without any label at all, and at others it had been given the name of another composer. One of O’Dette’s favourite pieces was called Mia Barbara, which had been found in a German manuscript. He discovered new manuscripts almost all the time, often in stately homes stacked away on a shelf. “Somebody finds an old book lying on the floor and decides it must be music, and it turns out to be yet another previously unknown Dowland work, not difficult to identify.” Dowland’s style and personal imprint were clearly unmistakeable. “You might think this process of discovery might stop, but in Dowland’s time every educated person played the lute, so there are thousands of manuscripts still awaiting identification.” 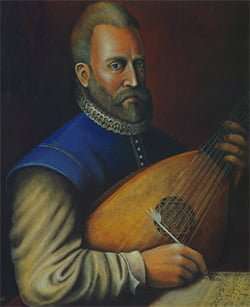 I ask him to describe the method of composition in the 16th-century. He said it is infinitely variable and the music was continually changed by improvisation as well as the number of parts for which it was written. Usually a piece began as an ensemble work written for up to five instruments but was then often expanded to include more. Dowland was always friendly to his players in the voicing of his parts, to make them attractive to play and not too difficult. He would also alter the music by improvisation and the number of instruments used, every time he played it. So he repeated his basic material over and over again. He built up a repertoire of popular hits like Lagrime and Semper Dowland which could be heard as ensemble pieces of different sizes, a solo work, or even including a vocal line, and in one instance a piece was scored for three lutes.

We asked about the dance music. We had heard at his recital numerous galliards including The King of Denmark’s Galliard, A Galliard on Walsingham, The most sacred Queene Elizabeth, her Galliard, and the Frog Galliard (a real hit), and then there were the Almins, which are also dance movements. “The basic rhythm of the galliard was triple but had a strong upward lift on the fourth beat. This had set the choreography for the dancers. But the rhythms were varied A galliard could be lyrical or vigorous and changed with expressive ornamentation.”

Two other variants of lute repertoire are interesting. The Orpharian, a sister instrument, with metal strings, had a very special colour and was suitable for mellower music, although a Melancholy Galliard played on a lute could achieve a similar effect. The longer the string bass on the neck of the lute, then the darker and more resonant the sound. The music became more expansive and sombre on the longest instruments, which suited expressive pieces like Semper Dowland semper dolens, Forlorne Hope Fancy and Lachrimae. By using more than one instrument the player has a great variety of colour to offer, although O’Dette’s view is that when playing a programme it is better to stay with a single instrument.

We asked particularly about people dancing to music in Elizabethen times and the amount of the sound a lute could provide in a dancing room. “You adapt to the circumstances. Where you consider dancing in couples I don’t think they would dance to just a solo lute, but use lute trios, while lute quartets were very common. The Volta would be danced to a five-part violin ensemble. Remember everyone had to be able to dance and you could not have been a musician without dancing yourself. Dowland had dancing lessons from the age of two years old.”

The use of variations was to build up excitement in the galliard but variation form has always played a role in music, increasing its interest. Audiences always expected variations to make the music more varied and interesting. The lute, of course, cannot sustain and the only way one can make a crescendo on a plucked instrument is with many little notes. Ornamentation is usually done on the spot by the musician, but Dowland often carefully wrote in the ornamentation himself, and it was very beautifully composed. When a sad piece sounds like a love song, in the case of Dowland it is an expression of personal feeling. He never achieved the court appointment he longed for. This was almost certainly not because of his Catholicism but probably because he was a very strong personality who rubbed people up the wrong way.

We asked Paul how he would describe the essence of the Pavane? “In its early years a Pavane began its life at a comparatively fast tempo. But it became slower – the phrase lengths got longer and the tempos became more expansive often generating a profound melancholy. Fantasies and Fancys (interchangeable names) could also be very sombre pieces. By contrast there were jolly pieces dedicated to a patron (Mrs Winters Jumpp, Mistris Whittes thinge) and then Dowland would use the music again with a different nickname. One last titbit of information: Lute players were also notorious spies, as they were the only servants who had access to the privy chamber which gave them many opportunities to be more than musicians.”

Paul O’Dette has recorded on Harmonia Mundi a full circle of Dowland’s music and this is his closing comment: “Instruments tell you what they want and what they don’t want and that is certainly is the case with me. Julian Bream is my inspiration and friend and I have learned much from him. And as I have learned more about the techniques and ornamentation of John Dowland’s time, so my playing has matured. We all strive to get better in everything we do. I realise that in some of my early recordings I still hear things that are very good, but I play them differently now and hopefully with more depth. The youthful pieces have carefree playing and much energy. Later one has more perspective over the music which provides added depth. But there is always a danger of losing that freshness, which I try not to do.”