Peter Hill is closely associated with the music of Olivier Messiaen, as well as a number of 20th-century and contemporary composers, so for him to go further back in musical time and record his Johann Sebastian Bach’s The Well-Tempered Clavier is news indeed. Yet his relationship with the music goes back some distance while he has been deliberating his interpretations of the 48 Preludes and Fugues. 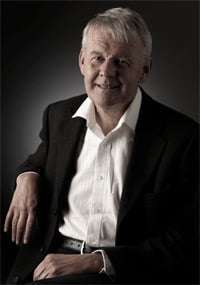 A lecturer at Sheffield University, Hill has a way of talking about music that draws the listener in, and in the course of our conversation he works his way on to mini-lectures without ever losing sight of either the question or the point he is trying to make. Yet there is only one place we can start, which is by asking why he has chosen to document Book II of The Well-Tempered Clavier before Book I?


“It is rather odd and it’s because it arose from a meeting that I had with Paul Baxter of Delphian. We talked about a lot of possibilities. Book Two was on my piano desk, and I had been playing it and had become more and more fascinated. I said to Paul that one day I would love to do that, and so he encouraged me to record it. I have done Book I in public, about six or seven years ago, but now we have definite plans to do that. I don’t know what to expect as the CDs get released, as one gets rather typecast! As I’ve done a lot of 20th-century music people tend to think of me in that way.”


The association with Bach is a long-standing one, however. “In some ways Bach is new to me, but it also goes back to my childhood. I was a chorister, and it was a red-letter-day when we did Jesu Meine Freude; it was my favourite event of the year. More recently I studied pieces from Book I, and you learn so much more from composers influenced by Bach. During the summer holidays I always enjoyed playing Bach just for fun, and my family started to make complimentary noises about the music that was coming from the room. Because of that, and because of these recordings, Bach will now feature regularly in my musical life.”


In his liner notes accompanying the CD, Hill goes into considerable detail about the music. He sees this as a vital aspect of the package. “I think it’s tremendously important, and I think it has got to be packaged in a compelling way. Giving the public a substantial essay is part of it. Saying something about each movement, as it were, is important; it’s a way of nudging the listener in the right direction. There are interesting things about the background, especially with the music in Book II, as it is about what Bach would have wanted. There are many Urtext editions, but they disagree with each other. For Book II we don’t have a final text in Bach’s hand, and he went on revising it until his death. It becomes revealing because when someone of Bach’s calibre makes a revision it’s not necessarily better, but it’s different. It’s rather like Bruckner symphonies, where it is perfectly legitimate to perform an earlier version. The different versions are substantial with Book II, for instance in the B flat Prelude and Fugue, where there is a revision from smooth crotchets to quite different quavers.”


Peter Hill is scrupulous in his preparation. “I was working quite seriously at this for three years. I’m not the only one to think of it that way, either. András Schiff said it was by far the hardest thing he had ever had to do. It challenges you as a musician, to use the piano in a sophisticated way. For the late Gustav Leonhardt it was almost a criminal offence to play Bach on the piano, but the idea has survived the idea of period performance. The old records of Edwin Fischer made me realise that now we have to think out our position, but it’s marvellous how many people have done that. Off the top of my head I think of Wanda Landowska, Glenn Gould, Angela Hewitt and András Schiff as people who have been successful in that regard.”


It also acts as an illustration of the versatility of Bach’s music. “Well you’ve got it in a nutshell. If yet another recording needed justifying, it is because the music is so full of meaning, and no musician could distil all of that in one single performance, saying everything. The joy of Bach is every time you come back to it you find something more, like different ways of viewing a sculpture or a gem revealing different colours. Bach is full of colour, and he is such a wonderful harmonist. The wonderful thing about the ‘48’ is the way Bach uses the full spectrum of tonal resources: it casts a shadow over the evolution of symphonic music. If you look at a Fugue like the D sharp minor, the piece is an arc, but you hear the subject in new keys, re-harmonised.


“I feel it’s in the nature of this music to have ambiguities, with double meaning and multiple meaning. You see that in what I call the geometry of the music, which is why Bach could write Fugues for the violin, implying the voices. The C major Fugue does exactly that, and then the ambiguity of character is fascinating. When we get to the B minor Fugue you would imagine it would be a very important piece of music, as at the same stage in Book I all twelve notes are used in the subject. It’s something of a blockbuster. On the face of it this one is a sturdy country dance, but as you explore it there is this amazing passage where the Fugue is surrounded by a yodelling line, and it reminds me of the late intermezzi of Brahms in B minor – which operates at the same tempo of this Fugue.”


Hill has plenty to enthuse about in Book II, citing the “fascinating balance between two types of character. The rococo elements look forward to the late 18th-century painters. It is very poetic music, but the half-lights are not quite so obvious as they seem. As a performer it is fascinating and impossible to distil it all, but you do your best! With a recording you try to capture as many of the meanings as you can. You have to refine, refine, and refine until you reach a certain simplicity. This is precisely why Schiff said it was so difficult, and it’s why I would echo that sentiment.”


Hill studied closely with Olivier Messiaen, and recorded the composer’s piano works in versions that are still considered definitive. Did Messiaen reference Bach at all? “Not very much, though he certainly played the Chorale Preludes. The obvious parallel between the two was they were the greatest composers of sacred music in their particular age. In a funny sort of way I have found that performing contemporary music has a parallel with Bach, it gets something out of the piano that makes you really creative, and that’s part of the imagination. I dislike the monumental style of playing Bach; in fact I see him as much more exploratory. In the first few bars he gives you the kernel of the idea, and then you follow his train of thought as he expands and amplifies on that idea. It should have a flexibility and not be set in granite. In recordings you’re not competing with coughs and sneezes, so you can treat your listener as attentive. You don’t have to bang out the subject, and you hope each time they will find something in it. I see Bach as a linear composer taking the listener on a journey.”


As a parting question, given that Hill also worked with John Cage in the 1970s, how does he see the composer in his centenary year, 2012? “I think he was a very important and refreshing composer. Music was created by flesh and blood, and this ties in with what I was saying about Bach, being flexible, imaginative and thoughtful. Cage was working against this idea of a composer setting out to create a masterpiece all the time. The role of a silent piece, it’s a frame if you like, part of it pokes fun at the idea of opus numbers and the like. What is odd but revealing is the correspondence between Cage and Boulez, who you would think of as chalk and cheese, but what Cage was doing struck a chord with Boulez. His writing is also very beautiful.”